Baseball Films To Knock You Out Of The Park 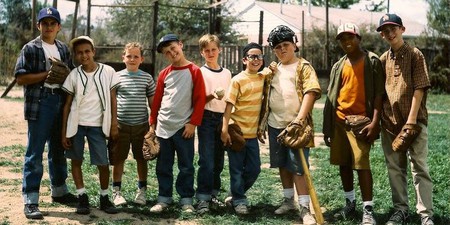 Summer in North America means a lot of things: lake trips, fireworks, barbecues, and – perhaps most important – baseball. From sentimental tear-jerkers, nostalgic coming-of-age tales to bawdy comedies, baseball films have become a a mini genre. Take a look at this list and get to the bottom of the ninth.

Field of Dreams has a talking cornfield, so you know it’s going to be good. Iowa farmer Ray (Kevin Costner) hears a voice in his cornfield saying, ‘If you build it, he will come.’ Right off the bat, there are many questions: who is ‘he’? Why a baseball diamond? Most importantly, why is the cornfield talking? Ray gets busy building the diamond; the townspeople think he’s a lunatic, but he persists. Spoiler alert: eventually the ghosts of baseball greats emerge from the crops for a game – including ‘Shoeless’ Joe Jackson. Field of Dreams may be heavy handed with its sentimentality, but who can resist ‘the magic of baseball’ trope?

A League of Their Own knew the recipe for an excellent film: baseball, killer 1940s and 50s costumes, feminist energy, and Madonna. During the Second World War, with many of baseball’s men off serving in Europe and the Pacific, women – as they did with countless other professions – stepped up to the literal and figurative plate. The All-American Girls Professional Baseball League (AAGPBL) existed between 1943 to 1954 to keep North America’s favourite pastime alive and well on the homefront.

A League of Their Own tells a fictionalized account of the real-life AAGPBL. Directed by Penny Marshall, the female-led cast stars Geena Davis, Madonna, Lori Petty, and Rosie O’Donnell as teammates on the Rockford Peaches. Rounding out the cast is the exceptional Tom Hanks, as the (somewhat) endearing foul-mouthed, alcoholic manager. In 2012, A League of Their Own was selected to be preserved in the U.S. National Film Registry by the Library of Congress as a work of ‘enduring importance to American culture.’

The second – and arguably, better – Kevin Costner film on this list, Bull Durham is what rom-com-sports-flick dreams are made of. Costner stars as ‘Crash’ Davis, a veteran catcher tasked with teaching minor league rookie catcher Ebby Calvin ‘Nuke’ LaLoosh, played by Tim Robbins, about the game. Susan Sarandon stars as baseball groupie, Annie Savoy (Annie doesn’t have a fun nickname). A love triangle naturally ensues, and the number of love scenes is on par with the number of baseball scenes. Bill Durham is funny, sexy, and sporty, earning it a rightful spot as a classic baseball film.

What’s hotter than a baseball love triangle? Baseball analytics. Moneyball, an adaptation of Michael Lewis’ best-seller, looks at how the back office can predict the moves on the field. General Manager of the Oakland A’s Billy Beane (Brad Pitt) is faced with a tight budget, so to outsmart the flashier teams, he recruits Ivy Leave graduate Peter Brand (Jonah Hill). The two throw out conventional baseball wisdom and start recruiting ‘undesirable’ players with potential. Moneyball is clever, inspiring, and somehow manages to avoid those ‘love of the game’ and ‘magic of baseball’ clichés.

Call it what you will – a seminal coming-of-age story, a bildungsroman – The Sandlot is likely the most nostalgia-inducing film on this list. Set in the summer of 1962, Scotty Smalls is the shy new kid in town. Smalls is taken under the wing of the local baseball prodigy, Benny ‘The Jet’ Rodriquez, and his team of misfits. Many adventures and misadventures ensue, including rival teams, lifeguards, a terrifyingly large dog, and a Babe Ruth-signed baseball.

Recurring themes in baseball films include hard-drinkers, former players, misfits, and little league teams. The Bad News Bears manages to encapsulate all four. Ex-minor-league hopeful and chronic boozer Morris Buttermaker (played by the comedic-grumpy-genius that is Walter Matthau) reluctantly agrees to coach a little league team, convinced by a lawyer-councilman who holds a serious grudge against the league when his son (with lacklustre talent) was excluded.

After failing to whip his team into shape, Buttermaker enlists skilled pitcher Amanda Whurlitzer (Tatum O’Neal) to take things into her sassy, gifted hands. Upping the classiness factor, the score by Jerry Fielding, is an adaptation of the principal themes of Bizet’s opera, Carmen. The Bad News Bears was a critical and box-office success in 1976; it’s clever, rude, with Roger Ebert describing the film as ‘an unblinking, scathing look at competition in American society.’ So, it’s obviously a must-see.

When it comes to biographical baseball films, look no further than 42. 42 tells the powerful true story of Jackie Robinson (played by Chadwick Boseman), the legendary baseball player who joined the Brooklyn Dodgers in 1946, breaking Major League Baseball’s colour barrier. The film provides a glimpse into the open racism that put Robinson and Dodgers manager Branch Rickey (Harrison Ford), who signed Robinson, in the firing line of the public.

42 puts the deep race issues in mid-century America at the fore, many of which will resonate with today’s viewers, given the contemporary prevalence of racial inequality. While some critics argue that 42 played it too safe with its direction, it’s an uplifting, earnest biography of an inspiring man in a pivotal period of America’s history.

For a proper drama, check out The Natural, a 1984 film adaptation of Bernard Malamud’s 1952 baseball novel of the same name. The film recounts the highs and lows of Roy Hobbs (Robert Redford), a ‘natural’ baseball player, spanning decades of his life. The Natural abounds with dreams, and the shattering of dreams, making it the ideal sports drama. The cast is full of Hollywood heavyweights, including Redford, Glenn Close, and Robert Duvall. Nominated for four Academy Awards, The Natural is one of the more critically acclaimed films on this list (that is not to diminish the cinematic value of The Sandlot).

Hardball is (loosely) based on a nonfiction novel that recounted the experience of Robert Muzikowski, an actual youth baseball coach. The film stars Keanu Reeves as Conor, a down-on-his-luck ticket scalper, gambler, and all-around mess of a human being. In an attempt to repay his debts, he’s tasked with – you guessed it – coaching a baseball team of fifth-grade kids from one of the toughest neighbourhoods in Chicago.

Baseball and film purists might scoff at Hardball‘s inclusion, and they might be right: Keanu Reeves was nominated for a Razzie, and Muzikowski unsuccessfully sued Paramount Pictures for defamation. But give it a chance: while the film may be formulaic, it’s more about humanity than baseball (Conor is a terrible baseball coach; there is precisely one scene where he imparts a baseball strategy on his team). If for nothing else, watch Hardball for the kids, who steal each scene they’re in.