'Je Me Souviens': the Story Behind Quebec's Official Motto 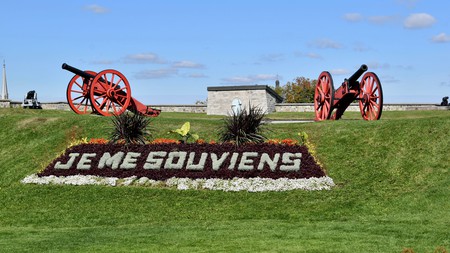 The citadel of Quebec, with flowers grown in the shape of the provincial motto | © Marcus Baker / Alamy Stock Photo

Whether you’re driving around Quebec or stuck in a Montreal traffic jam, you’re sure to notice the motto inscribed in the blue and white license plates: Je me souviens. Translated simply as “I remember,” this phrase has taken on a symbolism that reflects the province’s complex history. Here’s the story behind the official motto of Quebec.

Origins of the motto

Quebec’s motto can be traced back to 1883, but it only became official in 1939 when it was added to the province’s coat of arms. It has appeared on Quebec license plates since 1978, replacing the original motto, La belle province.

The originator of the motto was Eugène-Étienne Taché. His father, Étienne-Paschal Taché, was a premier of Canada, a “patriote” during the 1837 rebellions, and one of the fathers of Confederation. Eugène-Étienne’s work on a set of ceremonial arches was so well received that Taché, who had no formal architectural training, was tasked with designing the province’s parliament building.

Taché took inspiration from the Louvre, a leading example of Second Empire style that was fashionable at the time. When he suggested embellishing the façade of the new building with images of important figures from Quebec’s past, government officials agreed. They liked the idea of strengthening Quebec’s identity by highlighting its history and status as a founding nation. Taché then adorned the main entrance with the coat of arms gifted by Queen Victoria in 1868, and beneath it he added a maxim of his own: Je me souviens.

What does it mean?

Taché’s reason for including the motto is unclear, but his intention may have been to recall the history of Quebec. In 1883 he explained: “These are the memories that I want to evoke, while leaving our descendants the opportunity … to complete them.” Quebeckers were quick to take up the motto, and since then it’s taken on a life of its own. At a time of social and political upheaval, the phrase offered a way of reflecting on the past as the future took shape.

Given the history of troubled relations between English-speaking Canada and Quebec, the motto is often assumed to reflect separatist sentiment. In the 1976 general election, the Parti Québecois, the province’s most vocally separatist party, rose to power. The following year, the Charter of the French Language (Bill 101) became law, making French the official language of the region. 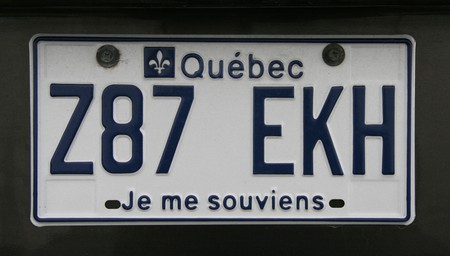 Another interpretation claims it is part of a poem that begins: “Je me souviens / Que né sous le lys / Je croîs sous la rose” (I remember / That born under the lily / I grow under the rose). The lily is a traditional French symbol, juxtaposed here with the English rose. This suggestion has been disputed, however, because the original poem has never been found. Taché had, in fact, written a second motto for a monument that was never built: Né dans les lis, je grandis dans les roses (born in the lilies, I grow among the roses). He later used the phrase for the commemorative medal of Quebec’s tercentenary in 1908.

‘Je me souviens’ in the future

Even if no clear explanation of the original meaning of Je me souviens exists, the history and context of the motto, and its ongoing prevalence in Quebec, can be understood as a reflection of a diverse and evolving province. Je me souviens is a flexible phrase for the province as it navigates its role as the French hub of Canada, and internationally. The motto could be seen as an invitation for Quebeckers of all backgrounds and ages to remember their histories as they move into the future.