Izumi Is the Brewer Behind Toronto’s Sake Scene 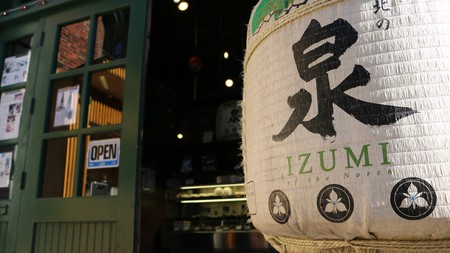 Toronto is enjoying a burgeoning sake-bar scene | Courtesy of Izumi

Forget Crown Royal and Canadians – Toronto’s budding sake scene has come to fruition with a smattering of excellent sake bars, both by-the-book and boundary-pushing. At the heart of it is Izumi, a traditional Japanese sake brewery with a distinctly Canadian identity. Here’s how Hogtown is reinventing sake and a guide on where to try these brews for yourself.

A kurabito (brewer) at Izumi Sake Company is coaxing out the first press of sake at Izumi Brewery. Just 25 days ago, the liquid started as rice and spring water, but now, bright, slightly cloudy arabashiri (first-press sake) is flowing freely from the press and into a waiting cup. The kurabito takes a gleeful sip – sake this fresh tastes glorious.

In a city of craft breweries, Izumi was the first – in all of North America, actually – to make sake. When Izumi opened its doors in 2011, it set into motion a quiet surge of sake lovers, converting everyone along the way. “Half the people who walk in these doors have never tried sake before,” says owner Ken Valvur. “Others come from a long way away specifically for us.” 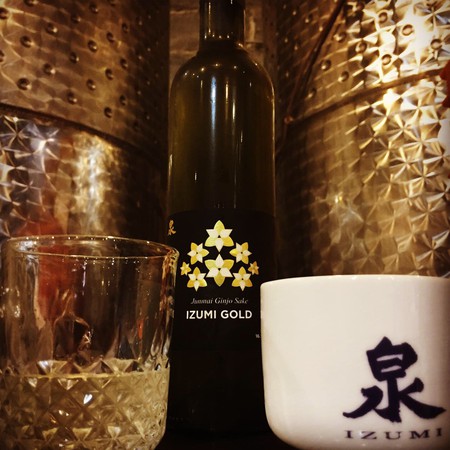 Izumi’s sake is brewed in Canada | Courtesy of Izumi

A Canadian native, Valvur went to Japan and fell in love with a beautifully fresh, unpasteurized form of sake called namazake. But when he returned to Canada, he found that it wasn’t available due to the country’s strict import laws. His solution? Make it here.

Valvur enlisted Yoshiko Takahashi – a renowned sake expert and one of only 30 female toji (lead brewers) in the world – to mentor a team of kurabito. The workers follow a strict, religious regimen shared by all Japanese sake makers. They report for duty just after the sun rises and nod to a small shrine in the brewing room before clocking out for the day. While the traditions were born in Japan, the taste is all made in Canada.

It’s the terroir of the country that molds the flavors of Izumi’s sake. Water comes from a freshwater spring that flows from the metamorphic rock of the Canadian Shield. Surprisingly, Muskoka Springs has almost identical alkalinity and iron levels as the famed Fushimi Springs in Kyoto, a region renowned for its sake. 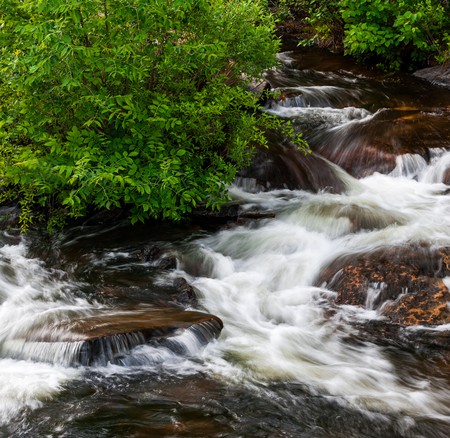 The rice – which is sourced from California – is milled, washed, steamed and then hoisted onto wooden platforms to cool. The doors of the brewery are then thrown open, beckoning in breezes from the outside to help cool down the rice while the kurabito spread it by hand. While Japanese breweries operate only in winter, Izumi operates year-round. The flux in temperature plays into the flavors. Each batch of arabashi is defined by the moment it is pressed; Batch 155, born during a blizzard, tasted of white peach, while Batch 157, pressed on a bluebird day, gave hints of nuts and lime.

In the winter, Izumi heats sake with maple syrup and local cider, and in the summer, Momofuku carries a sake slushie spiked with togarashi (Japanese chili). To reflect the variety of drinkers, Izumi also bottles sake cocktails. “They’re very approachable beverages,” explains Valvur. The Sakepolitan is a rosy-hued riff on a cosmo, while the yuzu sake Collins is a bright and effervescent liquid homage to Japanese highball culture.

With Izumi leading the charge, Toronto has developed a refined, nuanced relationship with sake. In the past two years alone, the city has welcomed a wave of wonderfully ambitious bicultural bars that range from bare-bones sake houses to sterling cocktail destinations. For Japanophiles and everyday drinkers alike, the following are the most transportive places in Toronto for perfect sake pours. 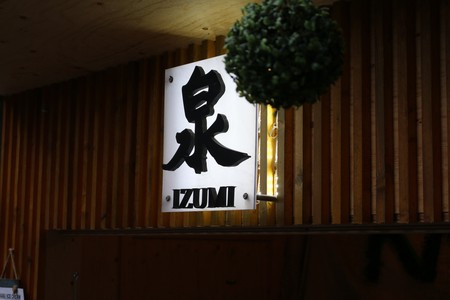 Izumi is a traditional sake brewery | Courtesy of Izumi 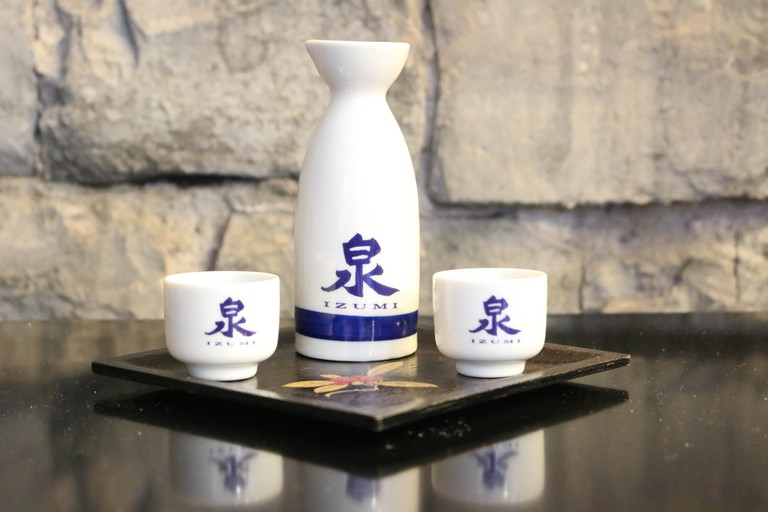 Sake at Izumi | Courtesy of Izumi

No self-respecting sake guide to Toronto would be complete without Izumi. The brewery runs tours in which sake fans can learn how the drink is made and taste freshly pressed arabishiri. Discerning drinkers will fawn over the Nama-Nama: a light, gently acidic, unpasteurized junmai. There’s the fruity Genshu – awarded a Commendation Award at the International Wine Challenge. The Teion Sakura junmai sips with the ripe apple and nutty koji notes of an off-dry sauvignon blanc; it’s a favorite among wine drinkers. During the district’s Christmas Market, ciders (with ginger, maple syrup, yuzu, apple and, of course, sake) warm up passing merrymakers.

Though Skippa just opened last year, it’s already become one of the most lauded restaurants in the country. The Harbord Street spot flips its menu daily, but no matter the day, expect fresh fish flown in from around the globe. Opt for the omakase and you’ll be treated to a parade of maguro (tuna) from Hawaii or tako (octopus) from Morocco, all expertly prepared in front of your eyes. To pair, the beverage program offers large-format pours and single-serving cans of sake. 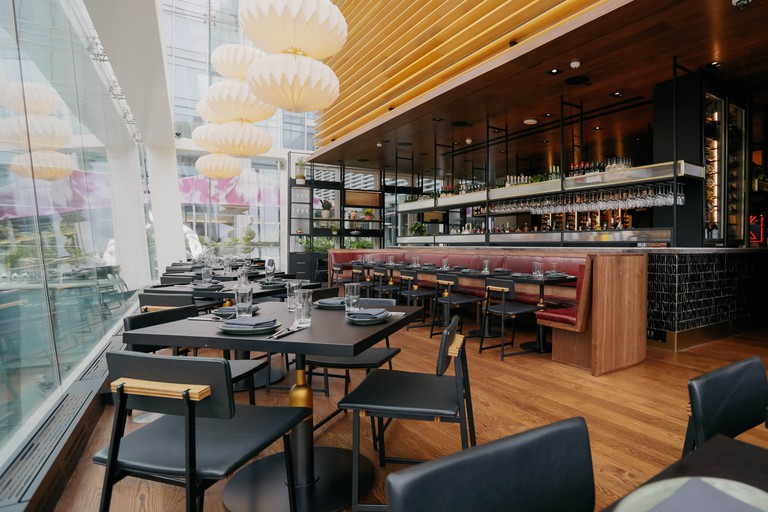 David Chang’s empire has expanded northward and into a sprawling complex in the Shangri-La Hotel. Pair sake with the umami-forward noodle bowls or perhaps the uber-indulgent fried chicken and caviar service. The bottle list includes Nama-Nama and Nigori from Izumi, as well as bottles from Miyasaka and Rihaku from Japan. But the cheeky sake slushie is the star of the show – made from sake, togarashi, yuzu and lime churned through a blender.

This exuberant chain of izakaya-style spots has popped up in Japan, Korea and, now, three locations in Toronto. The plates are small and meant for sharing – order the karaage fried chicken and gindara (miso black cod). The bottle list includes hot and cold options from Yoshinogawa, Kimoto and Izumi’s Sakepolitan, but if you’re feeling more exuberant, opt for a sake mojito or a cheeky sake bomb. Stop in on a Monday – $25 will get you a cold glass of sake served in a stem of bamboo. 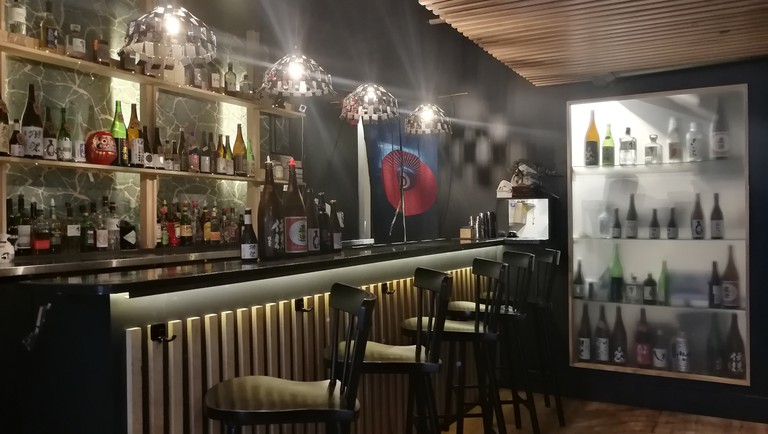 Black Dice Cafe for draft sake with a side of pinball

Veteran bartender Hideki Saito’s Japanese-rockabilly bar is an otherworldly experience: black-and-white movies flicker above the bar, surf rock blasts from the jukebox, and a handful of the city’s craft bartenders argue over a 1950s pinball machine. Sake is on draft here, poured right into a tokkuri (ceramic sake pitcher). A tour of the Japanese whisky selection is also worth it, as are the cocktails; the Ronin is a neon-hued drink of vodka, sake and calpico, a milky Japanese cultured soda.

Sakai for a sake haven on Dundas West

The newest addition to Toronto’s sake landscape is on Dundas Street West: everything from the aesthetics to the flavors and visuals of Sakai Bar feels unmistakably Japanese. It’s the brainchild of Stuart Sakai, a former brewer at Izumi. Pass through wood and paper doors on a Sunday, when bottles from Masumi, Kuheiji and Tedorigawa (star of Netflix’s Birth of Sake) are on generous discount. On Toronto’s chillier days, sip warm sake from your choice of choko (ceramic cup).