In Montreal, Picasso Comes "Face-to-Face" with the African Art that Inspired Him 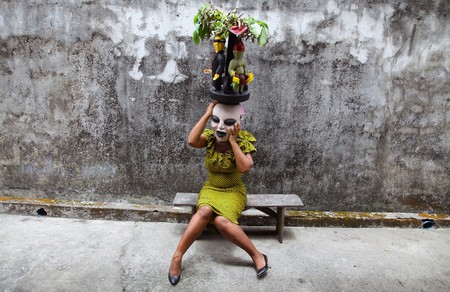 Zina Saro-Wiwa, 'The Invisible Man: The Weight of Absence', 2015 | Courtesy of the artist and Tiwani Contemporary, London

By the time he died in 1973, Pablo Picasso had bequeathed an unparalleled aesthetic that would change fine art forever. His abstracted figures broke with realist traditions and provided a revolutionary interpretation of the European world. But Picasso’s oeuvre was in fact deeply indebted to Oceanic, African, and indigenous American artifacts; the influence of which, until recently, was left largely unacknowledged.

Now, these ethnographic objects are getting their due at the Montreal Museum of Fine Arts (MMFA). In dialogue with contemporary artworks reacting to various discourses of colonization and postcolonial identity politics, they contextualize the visual aspects of Picasso’s monumental practice. 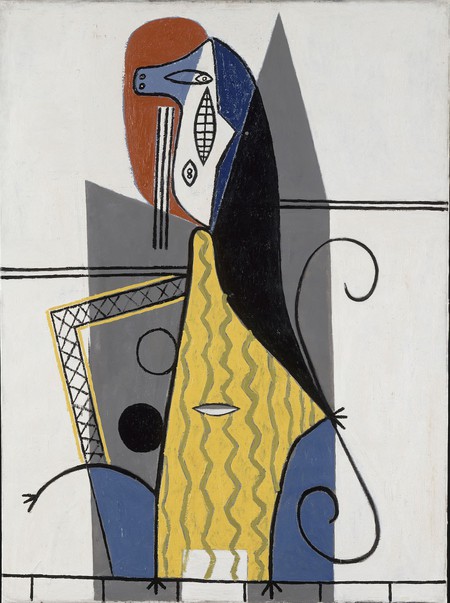 From Africa to the Americas: Face-to-Face Picasso, Past and Present is not another Picasso retrospective. Rather, Picasso’s work is situated amid the artifacts that so significantly shaped his vision, giving it a kind of context that many visitors may not have previously considered.

“We looked at the changing relationship between Europe and Africa—the way the European gaze on those objects changed [with colonialism], and how this gaze continues to change with contemporary African artists today,” Erell Hubert, curator of Pre-Colombian art at MMFA, tells Culture Trip. “We wanted to give a voice to contemporary African artists too. All of the works in the exhibition are presented on an even playing field. Nothing is there to explain something else, which is where the title Face-to-Face comes from.”

Picasso’s work is entirely absent from the first gallery. Instead, contemporary artworks by African-born and African-descended artists lead the way. Senegalese artist Omar Victor Diop depicts himself as the first African-born deputy to serve the 18th-century French government in Jean-Baptiste Belley (2014). A chromogenic print and a fibreglass mannequin by the British-Nigerian artist Yinka Shonibare question the ‘Enlightenment’-era principles of colonization. Mohau Modisakeng’s arresting video triptych Passage (2017) laments the complicated identity politics of postcolonial life. (Viewers may recognize Passage from the South African Pavilion at the 2017 Venice Biennale).

The exhibition, comprised of some 300 artworks and ritual objects from 35 countries, goes on to explore the prominent themes that informed Picasso’s art, from his many romantic entanglements to his fascination with human-animal hybridity. But three core sections, dictated by life before, during, and after the wars, guide the exhibition’s temporal flow. 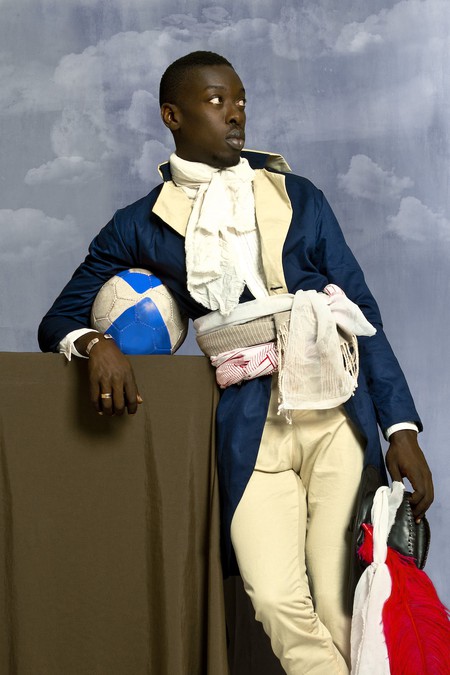 As chaos reigned throughout the first half of the 20th century, European artists sought a new, more expressive means of interpreting the world. The European occupation of Africa, too, resulted in immeasurable violence, but imperialist ventures fostered the circulation of ritual objects from the colonies and eventually created a European market for them. In turn, these items introduced the new aesthetic perspectives that Western artists like Picasso craved.

Ritual masks—which presented translations and representations of the human face—were one of the most ubiquitous influences on Picasso’s early work, as is apparent in paintings such as Les Desmoiselles d’Avignon (1907) and Mother and Child (1907). Interested exclusively in aesthetics, Picasso appropriated visuals from masks forged in Papua New Guinea, by the Yuk’ip in Alaska, the Amazonian Kamayura people, and the Songye in what is now the Democratic Republic of Congo; but the masks’ cultural, religious, and ritual contexts never figured in Picasso’s work.

To exemplify why this is problematic, Hubert points out a mid-century Gunye ge mask from the Dan people of the Ivory Coast. Picasso had mimicked the mask’s accentuated eyes for several figurative studies in the early 20th century, but it was created as a symbol of power, speed, and strength for young Dan men who won the right to wear it by triumphing in a ritual race. The mask was erroneously misinterpreted as an art object when it was collected, categorized according to a Western system, and improperly displayed as a decorative piece. “The mask is never meant to be seen on a neutral background like this,” says Hubert. “It’s meant to accompany a headdress, a costume, music, dancing, performance, and the body with it. In [any museum] context, this mask is incomplete.” 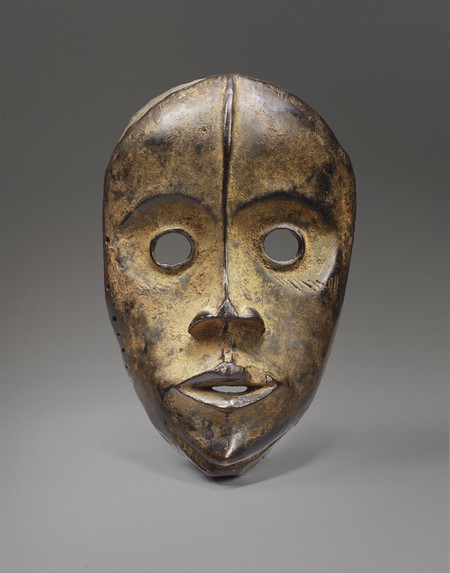 On a neighboring wall, chromogenic prints by Angolan artist Edson Chagas complement the sentiment of misapprehension. Taken from his Tipo Passe (2014) series (translating to ‘passport’ in his native Portuguese), Chagas’ prints depict anonymous subjects in button-down shirts and sport coats, but their identities are concealed by various Bantu masks to suggest the reductive nature of African stereotypes. 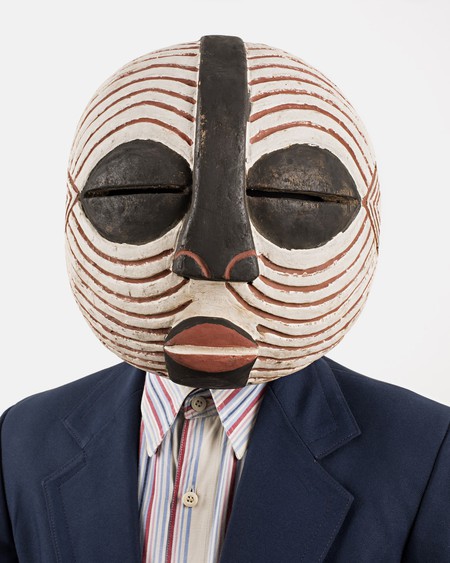 The self-proclaimed ‘visual activist’ Zanele Muholi carries this forward with her own interpretation of the contemporary black experience. The South African artist’s Dalisu (2016) is a self-portrait in which Muholi engages with the viewer through an intense stare. As she often does, Muholi darkened her complexion post-production by increasing the photograph’s contrast. The artist is quoted on the wall, stating: “I’m reclaiming my blackness.” Her face communicates unwavering strength, but layers of black yarn, manipulated to look like Muholi’s hair, represent the thriving microaggressions that wrap dangerously around her neck.

The social implications of hair are echoed on the opposite wall by Picasso’s Women at Their Toilette (1956), an image of European women combing their hair as part of a European grooming custom, which mirrors a 20th-century Ejagham ‘female dance headdress’ from Nigeria. The effigy’s hair is styled to indicate that she is of marrying age. 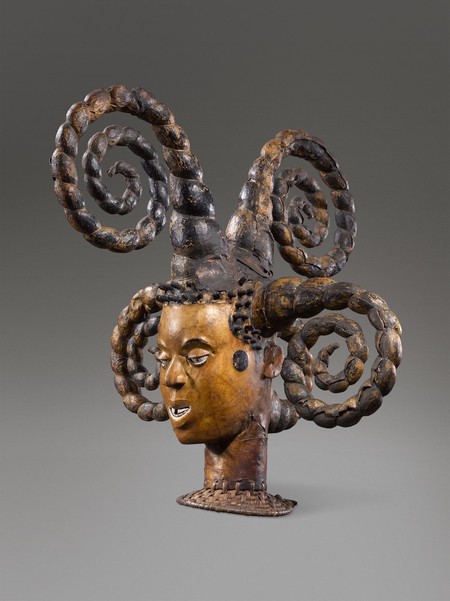 In the final galleries, Picasso’s late-life artworks coincide with contemporary paintings and photographs that convey the many social, cultural, and religious facets of the postcolonial individual. Picasso’s final years came during the decline of European imperialism in Africa, which for contemporary artists marked political independence and greater freedom from the misconception of the ‘fixed’ African identity.

Kehinde Wiley’s Simeon the Receiver (2015), an exquisite portrait of an African-American subject inspired by a 15th-century icon of an Italian saint, is exhibited next to a photograph titled Authentic (2018) by the Congolese-born, Montreal-based artist Moridja Kitenge Banza. Authentic shows Banza sitting in his Canadian backyard, dressed in modern-day clothing. The viewer’s gaze is drawn to a batik panel in the center, and on it hangs Banza’s painting of Jesus Christ, whose face, upon closer inspection, is concealed by an African mask.

“Cultural identities cannot be fixed and defined,” reads a quote by the London-born Senegalese artist Theo Eshetu, which doubles as the exhibition’s principle conclusion. Eshetu’s 18-minute video Atlas Fractured (2017) layers shifting images of people from all over the world. Seeing visitors out with his powerful moving portraits, Eshetu’s installation effectively sums up the entanglement of narratives that span the centuries before it. Picasso was undoubtedly a creative pioneer, but From Africa to the Americas urges viewers to reconsider his work from within its unedited historical context.

From Africa to the Americas: Face-to-Face Picasso, Past and Present will remain on view until September 16 2018 at the Montreal Museum of Fine Arts, 1380 Rue Sherbrooke O, Montréal, QC H3G 1J5, Canada.