In Montreal, Artists of Color React to the Black Canadian Experience 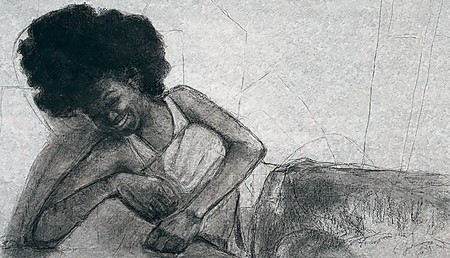 Charmaine Lurch, 'Being, Belonging, and Grace' (2017) | Collection of the artist

At the Montreal Museum of Fine Arts, a powerful exhibition gives the floor to Canadian artists of color.

Here We Are: Black Canadian Contemporary Art is an intimate showcase of recent work by artists whose practices explore their respective experiences as black Canadian residents.

“The idea is to communicate the history of black people in Canada and the difficulties they’ve faced, as well as their contributions to the country,” Geneviève Goyer-Ouimette, curator of Quebec and Canadian contemporary art at the Montreal Museum of Fine Arts (MMFA) tells Culture Trip. 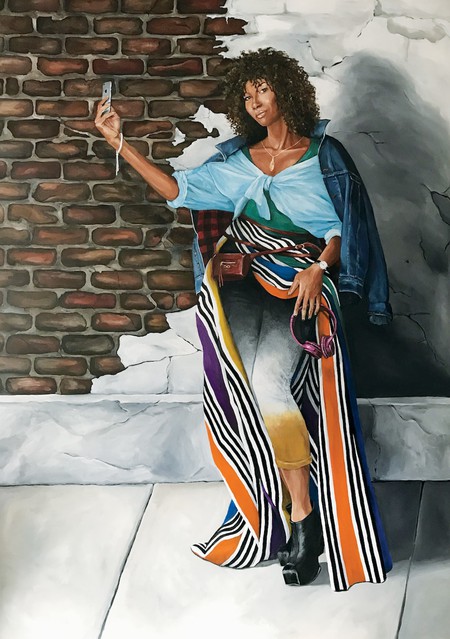 Gordon Shadrach, 'In Conversation' (2017) | Collection of the artist. Courtesy of the Montreal Museum of Fine Arts.

The exhibition, which originated at the Royal Ontario Museum in Toronto and was curated by Julie Crooks, Dominique Fontaine, and Silvia Forni, features the work of eight artists. For its MMFA iteration, the curators and Goyer-Ouimette chose to include three additional artists, all of whom lived and worked in Montreal: Haitian painter Manuel Mathieu, American-born mixed-media artist Shanna Strauss, and sculptor Eddy Firmin, aka Ano, from Guadeloupe.

Here We Are is indelibly linked to From Africa to the Americas: Face-to-Face Picasso, Past and Present, a major MMFA showcase of the Oceanic, indigenous American, and African artifacts that influenced Pablo Picasso. Also included in the dialogue are contemporary artworks by artists born in Africa or of African descent. From Africa to the Americas (open until September 16) flows into Here We Are, which, though a standalone exhibition, serves as an extension of this complex discourse.

Below are four highlights of Here We Are as identified by Goyer-Ouimette. 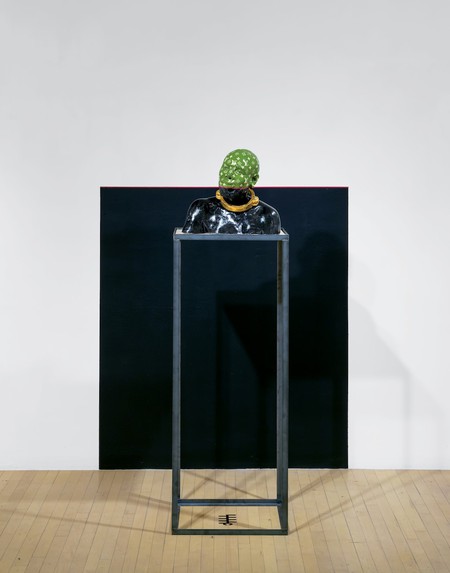 Born on the Caribbean island of Guadeloupe, multidisciplinary artist Eddy Firmin draws deeply from postcolonial complexities through the lens of language, race, and gender.

At MMFA, Firmin presents a sculpted bust modeled after himself. A red line separates his black lower half from the upper-half of his head (from the mouth up), green and imprinted with the Louis Vuitton logo. The white wall behind him is also divided by a red stripe, which distinguishes the wall from the black panel. As Goyer-Ouimette explains, Firmin’s chosen color sequence symbolizes the historic violence of black meeting white, and the subsequent European perception that whiteness denotes high culture. The green, she says, represents the commodification of black bodies and, as the restrictive collar around his neck suggests, enslavement.

[Danger, Singularity, and Strangeness] is denoted by a symbol (printed on the floor amid the base of the plinth) that amalgamates a poisonous centipede, a native flower, and a reptile. These symbols translate into the three key concepts that double as the title of the artwork. 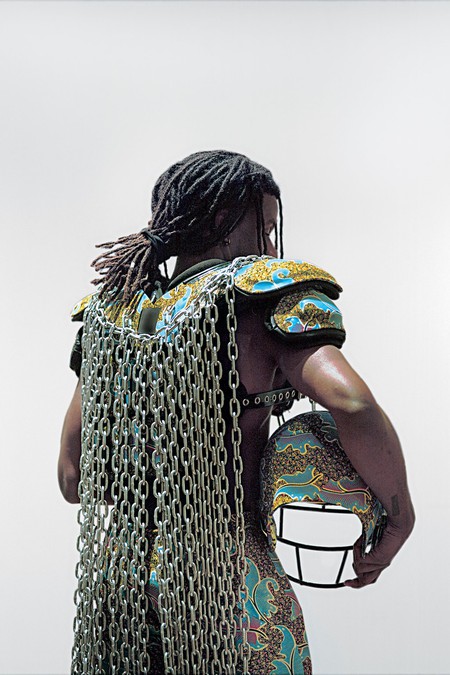 Esmaa Mohamoud, 'Untitled (No Fields)' (2018) | Courtesy of Georgia Scherman Projects and the artist.

Toronto-based artist Esmaa Mohamoud’s Untitled (No Fields) alludes to the historic exploitation of black male bodies. Goyer-Ouimette explains that the installation’s contemporary context enunciates the contentious act of kneeling on the American football field. A wearable uniform ornamented with a batik wax fabric and broken chains, Untitled (No Fields) references the former San Francisco 49ers quarterback Colin Kaepernick’s refusal to stand for the national anthem. It also recalls the fields in which slaves were forced to toil.

On a neighboring wall is a photograph of a man wearing the uniform. “The work speaks to the endurance and the resilience of Blackness,” the label says. “While clearly referring to current events in the United States, the resonance of the athletes’ gesture of protest is not limited to the African American context, but resonates with the equally violent and dehumanizing histories of objectification of Black bodies in Canada’s past and present.” 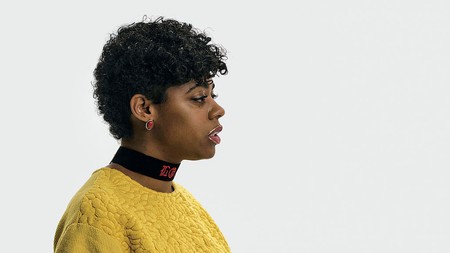 Michèle Pearson Clarke’s arresting video triptych presents 17 black Canadian subjects sucking their teeth in response to an off-camera prompt. The oral gesture, of West African and African-Caribbean origin, is typically a response to frustration, anger, and/or disapproval, among other reactions.

For Suck Teeth Compositions, Clarke asked her subjects what it means to be black in Canada. Their responses evoke experiences of discomfort in the face of civil injustice, while exhibiting the various ways in which this gesture is used. “The piece expresses the anger and pain of Black people living in Canada, where the ‘multiculturalism’ veneer denies the racism that many experience in their daily lives,” explains the press release for Here We Are. 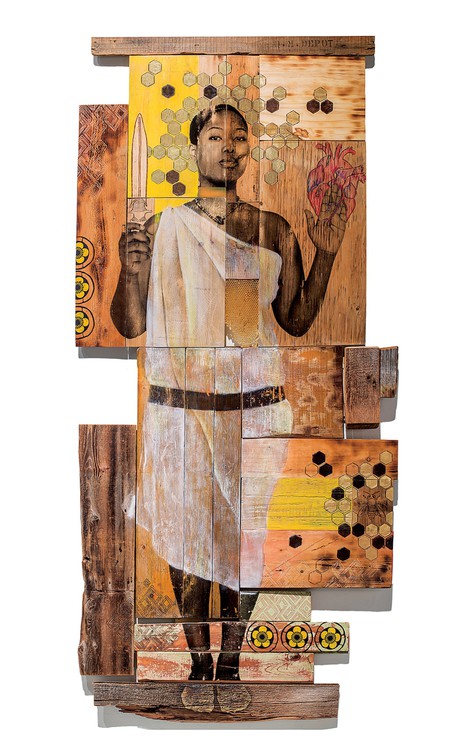 Shanna Strauss, 'Memory Keepers' (2017) | Collection of the artist. Courtesy of the Montreal Museum of Fine Arts.

Montreal-based artist Shanna Strauss was born in the United States to Tanzanian parents. Her work on view at MMFA, titled Memory Keepers, honors a legendary woman warrior in her family named Leti, who serves as the subject of this artwork.

Strauss portrays Leti as a statuesque woman whose figure comes together across disparate wooden planks that the artist gilded and adorned with symbolic patterns, including a honeycomb and a human heart. The story goes that Leti was the only woman at the helm of a male rebellion that fought to expel their German colonizers in Tanzania. She was ultimately killed by the Germans, who dissected her brain to find out what constituted her noble strength. But they examined the wrong part of Leti, Strauss’ grandmother would say, because her strength came from her heart.

“These engravings are traditionally used in Tanzania,” Goyer-Ouimette says. “[Strauss] has added gold leaf and other references to bees because in her family, and in Tanzania, beekeepers are important. And for her, it’s equally important to represent women as strong and beautiful.” Memory Keepers also pays homage to Strauss’ grandmother, whose passionate storytelling kept Leti’s memory alive for the generations that followed.

Here We Are will remain on view through September 16, 2018 at the Montreal Museum of Fine Arts.