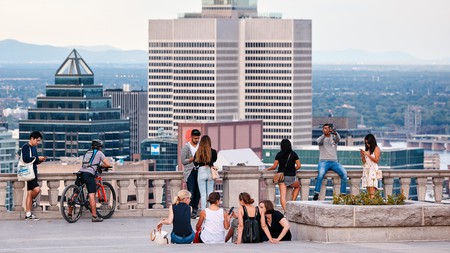 Before visiting the Great White North, such as Montreal, brush up on your Canadian slang | © Cagkan Sayin / Alamy Stock Photo

You’re likely to hear languages from all over the world in Canada, including the official English and French. There are also more than 70 indigenous tongues. But to really understand what’s going on, you’ll need to know some Canadian slang. Whether you’re short by a loonie or looking for the nearest Timmies, memorize these Canadian words, and you’ll fit in just fine.

Pronounced “ay.” This word is used in everyday Canadian vernacular to indicate that you don’t understand something, can’t believe something is true or want the person you’re speaking with to respond. It’s similar to the phrases “huh,” “right?” and “what?” commonly used in the USA.

“The Beer Store and the LCBO [Liquor Control Board of Ontario] were closed today.”

A loonie, the Canadian one-dollar coin, gets its name from the picture of the Canadian bird, the loon, that appears on one side of the coin. A toonie, the name for the two-dollar coin, gained a similar nickname to match the sound of the loonie – not to be confused with the American cartoon Looney Tunes.

“All I’ve got is a loonie. Should we Uber instead?”

TTC is what Torontonians call the city’s mass transit, run by the Toronto Transit Commission.

Timmies refers to the fast-food coffee chain, Tim Hortons, named after co-founder, the late, great hockey player Tim Horton. If you don’t know and love Timmies, you’re not a true Canadian. And don’t forget the Timbits or donut holes – the perfect match for the popular double-double (see below for definition).

“I’m gonna go to Timmies real quick and grab me a box of Timbits.”

This bad boy is a Tim Hortons favorite: regular coffee with two creams and two sugars. Up until 2020, you could roll up the rim of the cup for the chance to win a prize in an annual competition, but it’s now gone online.

“Mmm… I can’t start my day without my morning double-double and jelly-filled dutchie [square doughnut].”

The 6ix refers to the six former cities that now make up Toronto. The nickname was made famous by Toronto-born musician Drake, who uses it on his mixtape If You’re Reading This It’s Too Late (see below). He credits rapper Jimmy Prime with inventing the catchy term. Hogtown, Big Smoke and T-Dot are also used for the city.

“Yeah, this is a crazy life. But you and the 6ix raised me right.”

This term is commonly used to refer to a case of 24 beers. Don’t be surprised when a friend asks you to pick one up on the way over.

Pronounced “too-uk” or “tuke” in a Canadian accent. Derived from Arabic, it found its way into medieval French in the 15th century. This word refers to a cap with a small brim or no brim (a beanie). It’s usually worn when it’s cold – so pretty much year-round.

“Grab your toque. You never know when an ice storm might hit – this is Canada.”

A mickey is a hip-flask-size bottle of liquor. You can only find these at the LCBO. It fits perfectly in your purse, pocket or hand.

Refers to soda, the delicious carbonated beverage that mom rarely lets you have.

“Let’s have a couple pops on the chesterfield [couch].”

A slang term for Canadians. You may have heard this in the world of sports, as we cheer our national team while dressed in a stereotypical Canadian costume (think Mountie or moose) or as part of team names such as the Vancouver Canucks – although Torontonians only know the Toronto Maple Leafs.

“Look at those Canucks!”

The Canadian pronunciation for the letter Z. “Zee” is acceptable as well, but if you want to sound like a Canadian, go for zed. You’ll fit right in.

“Her name starts with zed.”

This term refers to kilometers, the unit of length in the metric system equal to 1,000m. (Psst, America: one kilometer is approximately 0.6mi!)

“There’s a moose on the loose! It’s about three klicks away.”

This word refers to someone who tries hard to please others or is overly enthusiastic. Similar to “nerd,” “brown-noser” and “geek.”

This slang term means to give it all you’ve got when all else fails. It’s used when referring to work, drinking, sports and any other activity that requires you to buckle down and get it done.

“I’m feeling under the weather today.”

This word describes a commotion or fuss, usually caused by a disagreement or difference in opinion (most commonly found during or after sports games).

“There was a kerfuffle when Montreal beat the Leafs.”

The Canadian version of the pre-wedding bachelor and bachelorette parties. It’s a night (or weekend) of fun with your pals of the same gender before your upcoming nuptials.

“We got Dan’s stag this weekend. Be sure to pick up a two-four on your way over.”

This word describes running shoes. It can also refer to street shoes. Handy for when your friend says “pitter patter” (let’s go).

“Bring your runners. We’re not going to take TTC today.”

An expression used to refer to something that was done well or an exceptionally great person.

“Your mom left a box of Timbits for me. She’s a beauty.”

Colored pencils, like those that mom wanted you to use instead of sitting on the chesterfield drinking pop.

“I’ve got a stack of pencil crayons that will be perfect for that Drake coloring book.”

This word describes Canadians who head south during winter to escape the cold. Destinations always include sandy beaches and tropical waters.

“My parents always get into a kerfuffle over my dad leaving for Florida every winter.”

One of those Canadian sayings that can be misleading. It’s used when asking what someone is doing – similar to the phrase “What are you up to?”

“What you sayin’ tonight?”

“Nothin’ much, just gonna chill on the chesterfield and drink a mickey.”

Use this phrase when you want to say something is hilarious or funny.

“I saw a Newfie [someone from Newfoundland] riding a moose the other day.”

Another term that can be confusing – used instead of OK. (Note: not used to express that something is valid or true.)

“Sorry, I’m going to be late. TTC was delayed.”

Refers to a line of people waiting for something, whether at the movie theater, the bathroom or a Leafs game. Queue and lineup are used interchangeably.

“The queue at Canada’s Wonderland is massive, eh?”

Another word for beaver tails, the famous Canadian treat made from fried pastry dough (which is sometimes smothered in toppings such as Nutella) – also called elephant ears.

“I’m going to get in this queue for a whale’s tail. I hear they are a beauty.”

A couch or sofa. A term usually used by the older crowd (hey, grandma).

“Go ahead and eat your elephant ears on the chesterfield. I’ll come sit with you as soon as I take these runners off.”

A term for a napkin – another nod to French lingo.

“Can you grab me a serviette? I spilt all of my Molson during that kerfuffle.”