Once, on a hot summer day in Sarasota, Florida, Glenn Gould was approached and questioned by the police. Despite the sultry weather, Gould was wearing a coat, a wool hat, and a pair of mittens; the policemen assumed he was a vagrant. But Gould was no vagrant; he was one of the greatest pianists that have ever lived. We take a closer look at the eccentric genius of Glenn Gould. 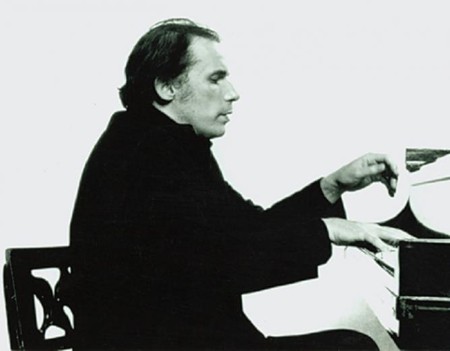 Glenn Gould was born in Toronto on 25 September 1932. It didn’t take long to become clear that he had a natural inclination towards music: not all babies hum rather than crying, and not all children learn to read music before they can learn to read words, as Gould was reported to do. At the age of 10, Gould was admitted into the Toronto Conservatory of Music, where he studied the organ and the piano. The encounter Chilean pianist Alberto Guerrero, who was to teach Gould piano, was fundamental for the young pianist’s future artistic development. Guerrero designed a specific exercise for Gould which is now known as finger-tapping. With finger-tapping, the pianist presses the instrument’s keys with one hand only, and does so with the help of the other hand; more precisely, he uses his free hand’s fingers to tap on the proximal phalanges (the joints closer to the fingertips) of the other hand. Through this training technique, Gould acquired such an agility in his fingers that he could play a stream of notes while still producing clean and distinct sounds, a skill that characterised his trademark style.

As well as his talent for music, Gould’s struggles with socialising were also apparent very early in his life. As a child, he wasn’t very good at making friends with the other kids, which only spurred them to pick on him and bully him. The inability to fully enjoy human relationships stayed with Gould for the rest of his life, a behaviour that has produced hypotheses of him possibly suffering from the Asperger syndrome, a disorder which falls in the spectrum of autism. Whether the fruit of Asperger’s or not — the syndrome was standardised as a diagnosis only a dozen years after his death — in his time Gould passed for an eccentric. His public persona was largely shaped by his many oddities, both on and off the stage. Although he led a mostly reclusive life, he was extroverted and even humorous in social situations; however, he disliked human touch, and something as simple as a handshake would make him nervous. Gould was also known to be a relentless hypochondriac. He would wear a long coat, gloves and a scarf in any climate and situation, in fear of catching a cold. He took many pills everyday to take care of health issues that he felt needed to be catered to; the medicines would clash with each other producing side effects that Gould would fight taking more medicines, in a vicious circle that only ended with his death. He was a nocturnal man, and he was said to call his friends in the middle of the night and rant on for hours while they would fall asleep at the other end of the line.

On stage, Glenn Gould was no weaker a character. For his entire career, Gould played sitting on a folding chair that his father Bert had built for him when he was still a child. He insisted on using it even when the padded seat was completely worn away, nor did he accept that it be reupholstered – he ended up sitting on the seat’s only middle beam. He always arranged his seating so that he would be fourteen inches above the ground, and the piano’s keyboard was found at somewhat the height of his chest. This unusually high position of the instrument — he had bricks or wood sticks placed beneath the piano to rise it to the desired level, if necessary — caused him to assume a hunched posture, which was advantageous to his piano-playing style, but looked quite odd. While playing, lost in the momentum of his performances, Gould could be seen humming unceasingly, so much so that in several recordings of his concerts his voice is actually heard between one note and another. Also, while at the piano he was irresistibly driven to move his upper body, usually in a clockwise motion; and he would frequently sway the one hand he wasn’t momentarily using in the air, as if he was conducting himself through the concert.

Gould’s reputation as an eccentric also derived from his repertoire choices. Gould preferred obscure, less-noted compositions over the seminal classics his fellow pianists played. He refused to play works by the likes of Chopin, Schumann and Liszt, considering them undeserving of their fame; of Mozart, Gould said that the Austrian composer ‘died too late’, judging his late work not so much worth of praise.

Gould graduated from the Toronto Conservatory of Music with the highest marks ever awarded to a student in Canada in 1946. In the following years he performed several concerts and recordings which, one more than the other, demonstrated his prodigious and idiosyncratic talent. His reputation, however, was still mostly limited to Toronto, and remained so until 1955, when the head of the classical division of Columbia Records heard him play in New York. That performance changed Gould’s life. The day after, he was offered an exclusive contract, which led to the recording of his first LP. As his usual, Gould chose a lesser-known work by Bach, the Goldberg Variations. His interpretation was so original, personal and powerful that it immediately established Gould in the stardom of classical music. He was 23 years old.

The album quickly became a best-seller. Part of the success was down to Columbia’s press team: they stirred much curiosity around this previously undiscovered talent, and the many eccentricities that characterised him during his performances. The Glenn Gould legend was born. Gould kept doing concerts in America and abroad (he was the first American pianist to perform in the USSR during the Cold War) for another eight years, until, at 31, at the peak of his fame and career, he decided to stop performing publicly; in any event, during the previous years he had also become known for his habit of suddenly calling off many of his shows, driving his life-long manager Walter Homburger to distraction. Gould, ‘the last Puritan’ as he called himself, had really always hated public shows. He felt that they had more to do with appearances and self-celebration, and less with music. On stage, he once said, he felt ‘like a vaudevillian’.

From 1964 on, Gould only performed in his recording studio (which temperature had to be invariably set at 90 degrees). He had always preferred playing in his studio; only there, sheltered away from the outside world, would he feel completely safe and at ease, and there he could nourish what he once called his ‘love affair with the microphone’. In fact, there were always several microphones in various locations around Gould’s studio; later, he would listen to the different tracks and combine them together choosing the best bits from each one. This is quite ordinary practice today, but in those years Gould’s recordings proved to be ground-breaking, and aroused controversy.

Once free from the commitment of public concerts, moreover, Gould happily dedicated more time to a range of activities other than playing the piano. He wrote many essays where he would describe his anticonformist view on the masterpieces of classical music; and he also wrote many radio and TV shows, in which he would participate disguised as imaginary, humorous characters he made up for himself. One time he would be Theodore Slutz, a New York taxi driver; then Dominico Pastrano, a half-Italian, half-Canadian boxer; Kalrheinz Klopweisser, a German composer; Sir Nigel Twitt-Thornwalte, an English conductor; and so on.

Gould died of a sudden stroke that hit him at age 50. Who was the real man behind the piano? There is no definitive answer as of today, and we might never have one. Was he an agoraphobic? Yes. A misanthrope? Not really. An eccentric? Certainly. He was the greatest Canadian pianist ever lived, and one of the most extraordinary musical talents of the 20th century. The description that fits him best is probably the one that once spilled out of the mouth of conductor George Szell. He summed Gould up in very few words: ‘that nut is a genius’.