6 Film Posters That Capture the Essence of Toronto 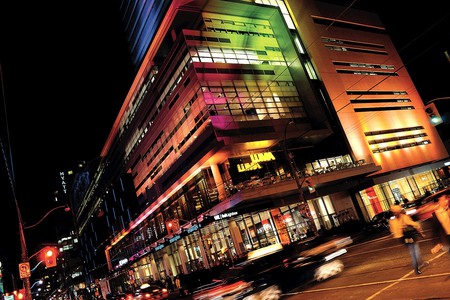 Toronto is a hub for movies; it’s attractive to filmmakers thanks to tax incentives and every September, the city hosts the prestigious Toronto International Film Festival. Toronto has taken on the identities of many different cities on film, which is interesting in itself because even in real life, the city struggles to define itself. It’s not easy to capture the city’s essence, but maybe it’s this fluidity of character that truly defines Toronto.

During the Raptors basketball season, Maple Leaf Square hosts public outdoor viewings of games. The public square of this multi-use complex can hold up to 5,000 people. Come rain or snow, scores of fans gather here to watch the games and support their local basketball team in the NBA. During the playoff games, the atmosphere is especially electric and music artist Drake (their global ambassador) has been known to casually drop by the square and cheer on the team. The presence and energy of Raptors fans has led to the square being nicknamed “Jurassic Park” in reference to Steven Spielberg’s 1993 film based on Michael Crichton’s novel. The black and red poster echoes the Raptor’s colours donned by Torontonians. 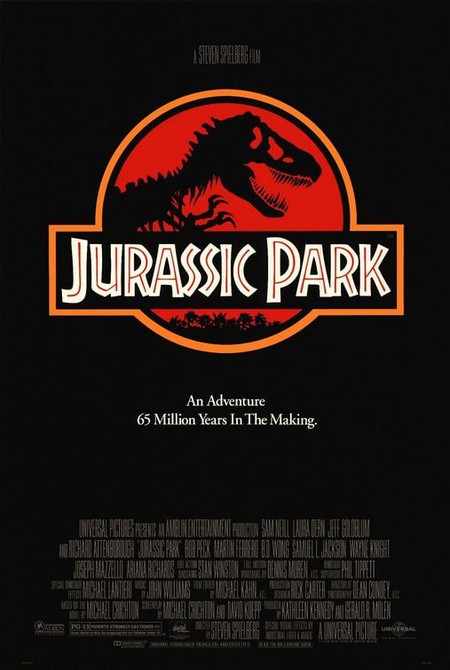 Don McKellar’s 1998 comedy-drama Last Night, is an end-of-the-world movie set in Toronto where locals are managing their last few hours on earth in a spirit that’s typical, with the least amount of drama. The film poster depicts everyday life in a grittier Toronto. A streetcar that’s come off the tracks, with someone walking away from it on a particularly grey day? It may not be the end of the world, but on a normal day, this usually happens, albeit on much busier streets. 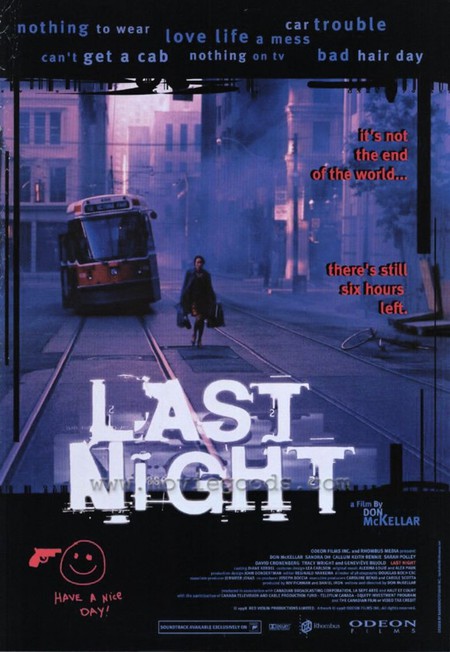 Many rom-coms may been filmed here, with Toronto playing another city in those movies, but here is a movie the city can call its own. Based on TJ Dawe and Michael Rinaldi’s play Toothpaste and Cigars, The F Word (in some countries, What If?) is a 2013 Canadian romantic comedy film directed by Michael Dowse. While it may be a little romanticized, the atmospheric Toronto shots capture what summer in the city is like. Gazing at the CN Tower from a rooftop, shopping on Queen Street, hanging out on the beach by a lake, hipster joints, George Street Diner, bonfires at the Scarborough Bluffs and so on. This movie poster depicting two people sitting in a diner with city lights glittering away in the background is very Toronto! 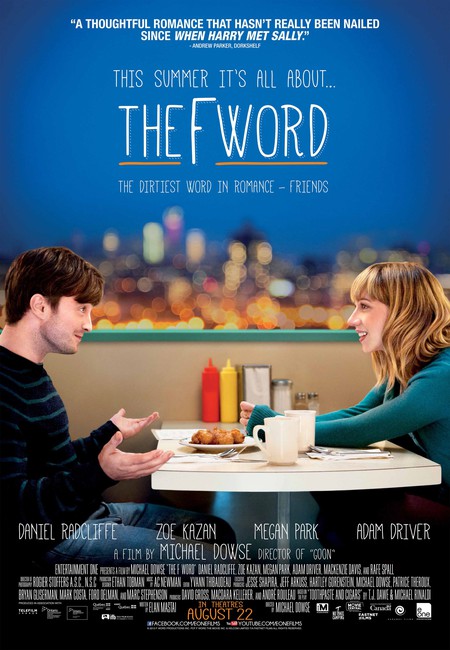 The F Word | © Entertainment One

Scott Pilgrim VS. The World

Edgar Wright’s adaptation of Bryan Lee O’Malley’s graphic novel delves into “not so long ago, in the mysterious lands of Toronto, Canada”. Scott Pilgrim VS. The World ensnares the city’s vibe as a stomping ground for young millennials that work hard and play harder. The film is also full of easter eggs dedicated to the city, such as Toronto filmmaker Don McKellar’s cameo shooting a Hollywood action movie at Casa Loma, or when Lucas Lee throws Scott through the New York backdrop and as it rips, we see the CN Tower. While the poster showing a kid strumming his guitar could be linked to any city, there’s something about him just enjoying himself in the moment that really reflects Toronto’s energy. Something about the city brings out the best in musicians, and many artists enjoy performing here. 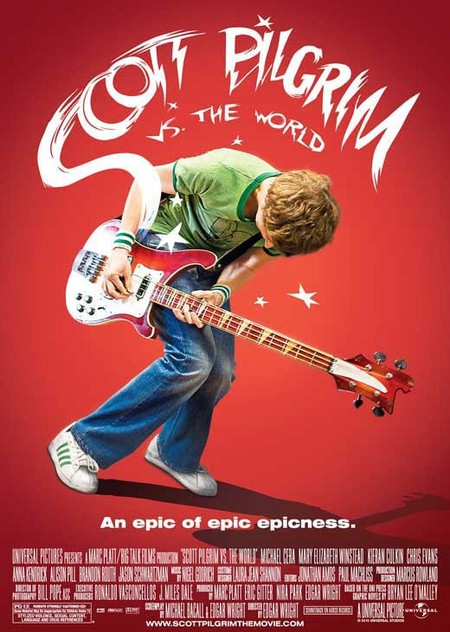 Even though this wasn’t the actual poster for the movie, Toronto was one of several cities that got its own special poster. In order to promote the film, Birdman posters showed the character standing on local landmarks of North American cities. The story is set in New York City, which is funny when you think about the amount of times Toronto has been used as a fake New York City! Filmmakers can fake Toronto all they like, but this city, like the landmark used in the poster is truly unique. The CN Tower is an integral part of Toronto’s skyline, reflecting the city with coloured nights at light. It lights up according to what’s happening, for example red for the Raptors, a rainbow during Pride week, blue and white for the Maple Leafs, pink for World Breast Cancer Awareness Month and other colours on holidays, such as Christmas and Thanksgiving. 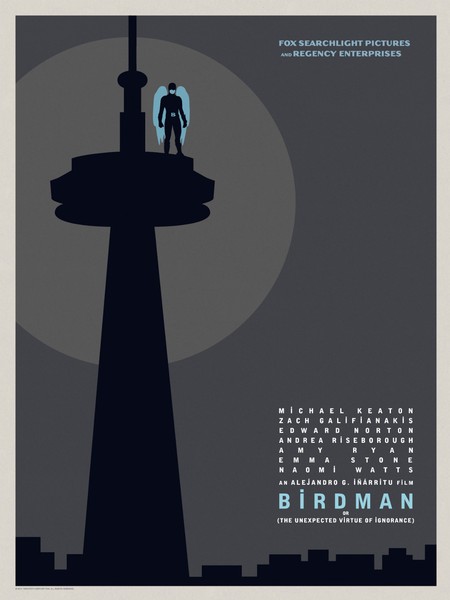 This movie tells the story of Deepak, a newly qualified young Indian doctor who movies to Toronto with his mother, only to find that his medical education is not eligible. He becomes a taxi driver and eventually ends up treating people in the back of his cab. Although Dr. Cabbie is ridiculous at the best of times, it does try to capture the exceptional struggle of educated immigrants who come to the city with hopeful dreams, but take on other jobs so they can make ends meet. When Deepak accepts his circumstances and decides to become a cab driver and explains that he is actually a doctor, his employer sums it up best when he says: “he has more PhDs in here than in Harvard”. The rearview mirror poignantly reflects the beautiful cityscape of Toronto, a metaphor for idealism that has been left behind for so many immigrants. 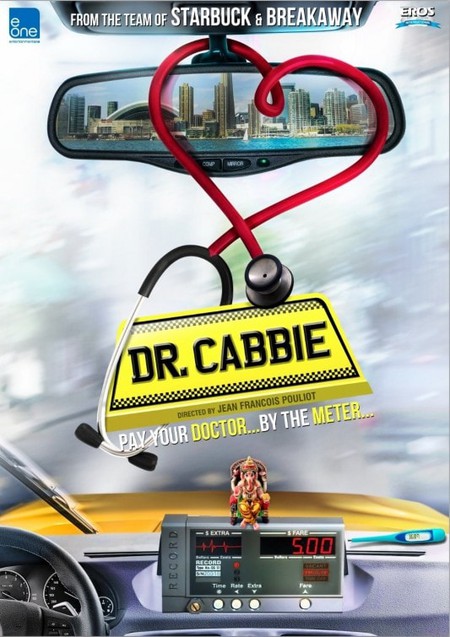