Everything You Need To Know About British Columbia’s Spotted Lake 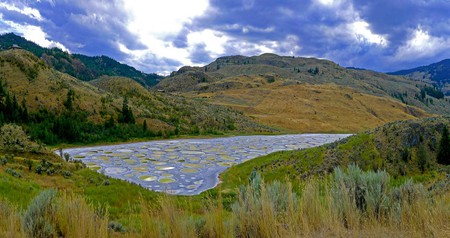 The province of British Columbia is home to over 20,000 lakes, but not all of them are meant for swimming.

The Pacific Northwest is chock-full of breathtaking natural wonders. The jutting mountains and marine climate are just two reasons why the area provides such a variety of greenery, landscape and range of recreational activities. So, it’s no wonder that sitting in the middle of British Columbia is one of Canada’s most bizarre lakes that is not so surprisingly called Spotted Lake.

Spotted lake, Canada The spots only appear in the summer, aren't these dots cool?! #spottedlake#dottedlake#lake#spots#lake#canadaspottedlake#beautiful#nature#naturephotography

Located in the Similkameen Valley in Osoyoos, Spotted Lake is just that, a spotted lake. As one travel site described it, Spotted Lake looks like something pulled right out of a Dr. Seuss novel. And while its name could not be any more descriptive, Spotted Lake isn’t its original title. To Canada’s Okanagan First Nations people, the amoeba-shaped wonder is fittingly called Kliluk, named after the minerals that form its circles.

Spotted Lake isn’t spotty year-round – it’s an endorheic body of water, meaning it’s a closed basin. The lake isn’t replenished by flowing rivers, but rather by snowmelt, groundwater and rainfall. For this reason, potential visitors should avoid the fall and winter seasons because, while its spots are visible underwater, the lake hasn’t yet bloomed.

It isn’t until spring and summer that the thick pastel colors emerge. When the clouds part and the sun shines, Spotted Lake’s water begins to evaporate. Slowly, the circles, created by various minerals like magnesium and sodium sulfates and calcium, come to life.

Spotted Lake isn’t hidden by any means. Travelers are privy to the natural wonder as they drive along Highway 3, which borders one side of the lake. It’s one of the coolest roadside attractions in the Pacific Northwest, accessible to everyone.

One thing to note, and also respect, is that while past pictures show visitors meandering around the colorful splotches, people aren’t allowed on the lake. A gated sign that reads ‘Spotted Lake – Okanagan Nation’ stands above the main pathway. For the Okanagan Syilx people, the lake is a sacred natural resource, its therapeutic waters used for traditional medicine. So, while you may feel the urge to step beyond the sign in order to get the perfect Instagram photo, just don’t. As readers can see, there are plenty of camera angles that don’t require visitors to walk onto the private land.