Diving With Polar Bears: a Photographer's Quest To Get the Perfect Shot 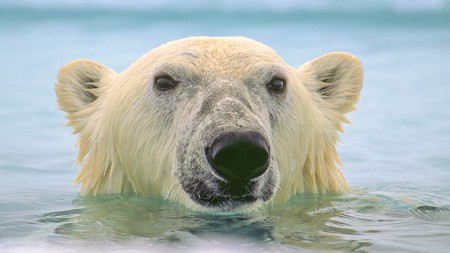 Award-winning Israeli wildlife photographer Amos Nachoum is one of a handful of people to swim with and capture images of polar bears – indeed, more people have landed on the moon. Now a new film documents his incredible ambition to photograph these dangerous predators. Here he tells Culture Trip how he went about making his crazy dream come true. 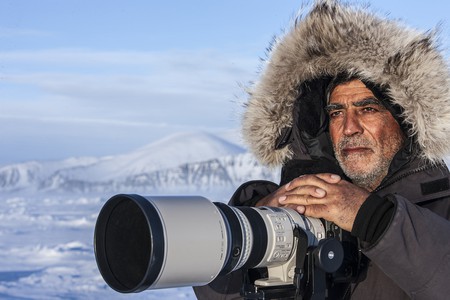 I first explored the idea of photographing polar bears idea in the spring of 2000 – but the expedition didn’t work out quite as planned.

Firstly, I could only find three other people who were willing to join me on my crazy and challenging trip. After all, polar bears have a reputation for being very dangerous, being the largest meat-eaters to live on land.

After I got a small group together, we ventured to a location in the Canadian Arctic, but then the person who was scheduled to join me in the water had last-minute equipment failure. I didn’t realise that he wasn’t by my side as I came face to face with a large male polar bear.

I whipped my head around to discover I was all alone, staring directly into the black eyes of this predator, who was only 15m away and slowly slinking towards me.

I knew I had to escape, but swimming back to the boat was too much work. I decided to dive further down, because polar bears find it hard to go deep. Their fat reserves and thick fur create a lot of resistance.

I deflated the air in the buoyancy control device, tilted downward and started kicking as hard as possible, looking upward every time I had to equalise. The bear was still with me, his paws directed towards my body.

I had to go deeper still. After I reached 25m, the bear was hovering and I could see he was moving in the opposite direction. It suddenly hit me that I was scared and breathing heavily. 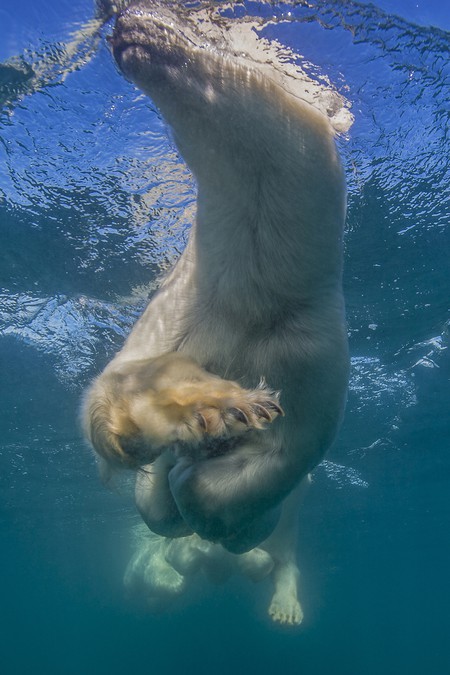 Looking at my pressure gauge I was alarmed that I may not have enough air to get to the surface. I started ascending slowly, and at about 12m, I ran out of air.

Luckily, I managed to surface on my last breath and I popped up, desperate for air. That swim was the longest 15 minutes of my life. I was shivering – due to both extreme cold and fear of the bear.

I didn’t get any photos on that expedition, because the encounter happened so fast and it simply took everything out of me just to survive. I am glad I did. The experience made its mark deep in my mind and heart, and I made it my mission to return with two requirements: to study polar bear behaviour and find a better team.

It was difficult to find someone to join me again, simply because of the cost and the qualifications needed for diving in polar conditions.

Fifteen years later, one of my students, Yonatan (Yoni) Nir, an Israeli filmmaker, asked if I would be the subject of a documentary he wanted to make. The film, Picture of His Life, would be about my quest to photograph polar bears underwater.

After all, he said, 12 people have landed on the moon, but only four have ever dived with a polar bear and taken the pictures to prove it.

Yoni and his production team managed to raise more than $1m needed for the expedition and we set off in the summer of 2015.

We were joined by Adam Ravetch, a leading High Arctic filmmaker who had had his own underwater encounter with a polar bear, and another director called Dani Menkin. 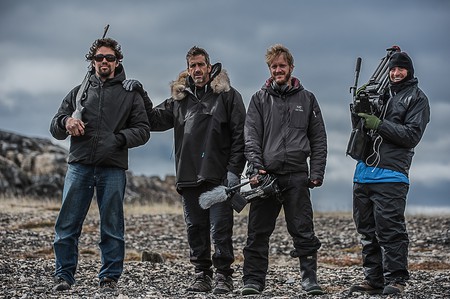 The filmmakers set off in the summer of 2015, hiring a local Inuit family to help them track the polar bears | | © Amos Nachoum

To help us locate the bears, we hired an Inuit family, Joe Kaludjack, his brother, Patrick, two of his sons, Bill and Junior, and his 10-year-old grandson, Leo.

We flew to Ellesmere Island with all our gear, including a generator, compressor, air tanks, 2,000 litres of fuel, food supplies and also toilet paper, and we set up a small camp on a secluded island surrounded by ice. Our ultimate goal was to find a mother with her young ones, as this would give a different dynamic to just diving with one bear.

After two days of rain, we were finally able to get out on the water. Hours later, we found what we were looking for.

Adam and I slipped into the water in the path of a mother and her large 24-month-old cub. When they were a few metres in front of us, we let the air out of our buoyancy control devices and plunged below the surface. 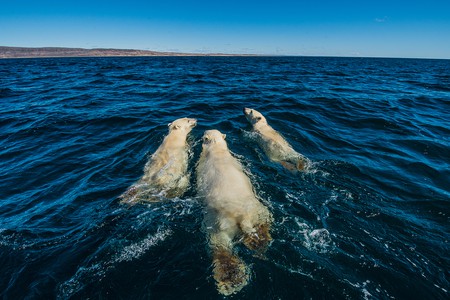 The pair passed by and I saw that the mother was holding her young one by her side with her rear leg. I felt touched by what a tender moment it was as they calmly swam by my side.

As well as being filled with awe, I was extremely excited that I had achieved my ambition of diving and photographing these powerful, curious and confident creatures. 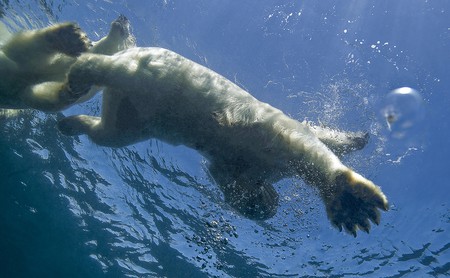 Out of the water, Adam and I embraced – our brotherhood forever cemented by the joy, happiness and intensity of the event we had just faced.

But on checking our imagery, we hadn’t got as much on film as we would have liked, so we set about trying to get more footage.

Following days of high winds and rain showers, by day six there was a clear window. We were able to get out on the water again and, after hours of searching, we hit jackpot.

We got a call on the radio that a mother and two cubs, probably 16 to 18 months old, had been spotted. We slipped into the water as they made their way to another island.

The sun was out and the visibility was great underwater. We made our way to within 100m of the mother and her two young ones.

Adam and I were there in the water looking at the family and all three bears were looking at us. We did not move, that was our plan, we stayed passive and let the leading female decide what to do. 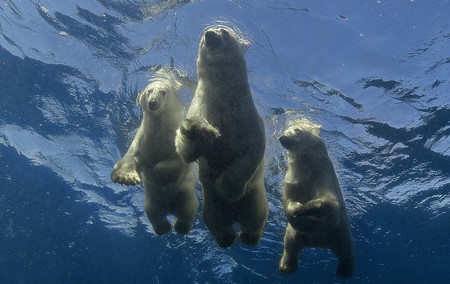 When Nachoum came face to face with the polar bear family, he let the bears decide how to proceed | | © Amos Nachoum

Amazingly, one cub came within a metre of me, out of curiosity, and then it pulled back up to its family. I was able to capture the three of them swimming away in formation.

At the surface, Adam and I raised our fists once again and screamed with joy and gratitude to the Inuit family who had guided us safely, and to Yoni and Dani for trusting us on the project.

Diving with polar bears was never an obsession for me, rather it was a passion. My motivation for capturing animals in their natural habitat has always been to educate and inspire people to appreciate nature. 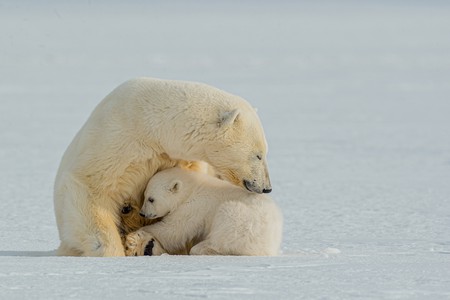 It is my belief that there is no dangerous wildlife; rather, unfortunate incidents occur because of a lack of experience or irresponsible actions by people.

I have documented the behaviour of many predators, from great white sharks to Nile crocodiles and orcas. I have learnt to respect my fear and ask myself what I am afraid of. At the end of the day, fear makes me more alert and awakens all my senses.

My eyes, ears and sense of smell are connected with the surroundings when I am in these situations. Like when I swam with the polar bears, I can tune in and enjoy the moment I am in, motionless, yet with the utmost respect for the wonderful wildlife inhabiting our world.

As told to Sadie Whitelocks

To join Amos on one of his unique wildlife photography trips, visit www.biganimals.com