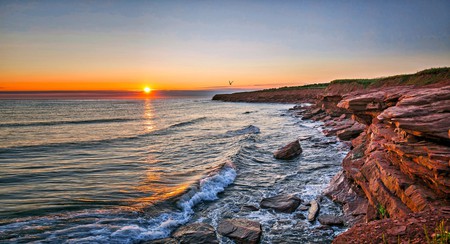 There’s a reason Prince Edward Island is dubbed Canada’s Food Island – a rich sea life, combined with acres of fertile farmland, mean the cuisine here is as good as it gets. With all of this wonderful land comes magnificent nature spots and 1100 kilometers of coastline to be explored.

The breathtaking landscapes and lively cities of mainland Canada often unintentionally eclipse the country’s more understated wonders. None more so than Prince Edward Island (PEI). Nestled in the Gulf of St. Lawrence and named after the father of Queen Victoria, the island is as majestic as its name suggests. Here is Culture Trip’s guide to the best ways to get to know the jaw-dropping coastline, culture and cuisine of Prince Edward Island.

Book an experience with a local

It’s a known fact that your food tastes better when you work for it, and there are more than a few places on the island where you can get your hands dirty in exchange for some grub. Down in East Cardigan, one experience led by local fisherman Jim Conohan will show you how to shuck oysters while giving you a lesson on the life cycle of the PEI marine life. Don’t worry – you’ll be rewarded with a meal afterwards. Gorge on your catch of the day while enjoying a glorious coastline and listening to Jim’s tales of his life at sea.

If you take a trip inland, check out local falconer Peter McMurchie and his magnificent flock of hawks and falcons. Watch as some of the world’s largest birds of prey swoop and swirl overhead, only to land on your arm so you can admire these wonderful creatures up close. 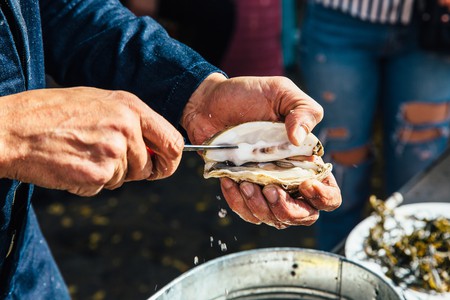 There are plenty of food experiences to get stuck into on the island, including learning how to shuck oysters under the watchful eye of a local fisherman | © Alexander Spatari / Getty Images

Visit the many lighthouses on the island

Amateur pharologists will be in their element on Prince Edward Island, which is home to the highest concentration of lighthouses in North America. Built in 1845 and standing at 60ft (18m) tall, Point Prim is the oldest on the island: for centuries, it assisted ships in navigating the reefs all the way to Charlottetown Harbour. These days, it’s a picturesque spot for a coastline picnic overlooking the ocean. Chow down on a bag of chocolate-covered potato chips (a PEI favourite) and imagine the part this lighthouse played in Canadian maritime history in its heyday.

Over on the other side of the island, standing at 68ft (21m), West Point has claimed the title of the tallest lighthouse in PEI. Visit its quaint museum to learn about the vital role the lighthouse played in the maritime history of the area. When you’ve finished admiring this historic sight, which you can also stay in, you’re only a stone’s throw from the boardwalk that leads to Cedar Dunes Provincial Park. 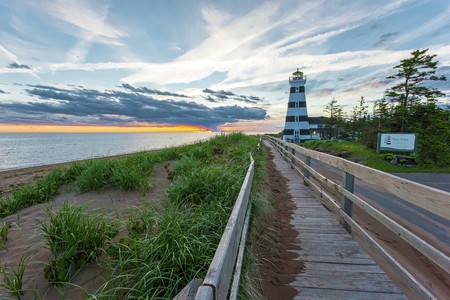 Of the island’s many lighthouses, West Point, the tallest, played a crucial role in PEI maritime history | Courtesy of Atlantic Canada

Eat your way around

The bountiful coastline provides the island with world-renowned seafood and has fast become a hotspot for excellent dining. The New London United Church has been converted into The Table, a restaurant with community at its core. Take a culinary class to familiarise yourself with traditional PEI recipes, or take a load off and let head chef Derrick Hoare give you the full dining experience and a bona-fide taste of the island.

No visit to PEI would be complete without a lobster supper. Fisherman’s Wharf Lobster Suppers does it best, with a 60ft salad bar and unlimited seafood chowder. Another favorite is the New Glasgow Lobster Suppers, which has been dishing out lobster since 1958. Think fresh plates of Atlantic scallops, glazed sweet ham, buckets of fresh island mussels and fresh lobster. 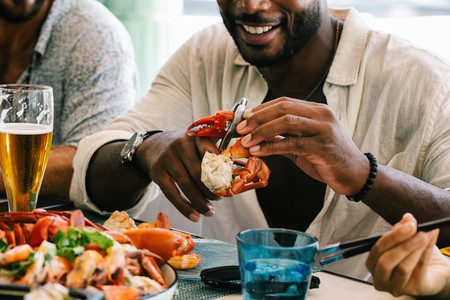 Head to a nature spot and hike the coastline

For a breath of fresh air, hike beside the red cliffs that flank the PEI National Parks of Cavendish Beach and Brackley Beach. Pull on your most comfortable boots and join the 435mi (700km) route around the entire island – aptly named Island Walk. The trail, which can be completed in one go in just over a month or in sections, will take you along dirt roads and most of the Confederation Trail, while offering blissful ocean views. For a smaller bite of the PEI coastline, the 6mi (10km) Gulf Shore Parkway hike from Cavendish to North Rustico is the one. It offers similarly stunning vistas, but with a slightly smaller step count. If you want to kick back and relax afterwards in your campsite, why not roast some marshmallows and crack open a craft beer around a campfire in PEI National Park? 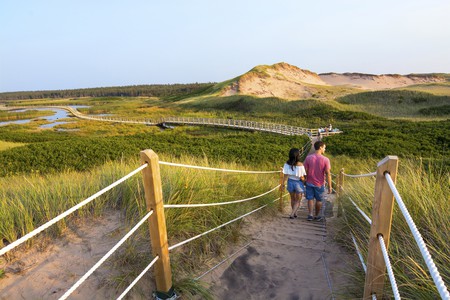 Go to a food festival

To continue your culinary adventures, head to one of the vibrant food festivals in PEI. Whet your appetite at The Fall Flavours Festival, an island-wide event where local produce and exceptional ingredients – from oysters and clams to street food and succulent meats – are the name of the game.

In the heart of the capital, the PEI International Shellfish Festival has been a staple in Charlottetown since 1996. The four-day event, held over the third weekend in September, is packed with culinary demos, seafood tastings and oyster-shucking competitions – the perfect way to spend a tasty weekend. 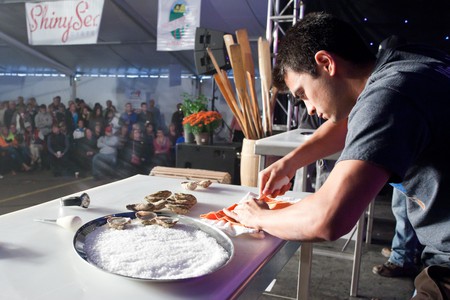 Swing by a heritage site

To really get to know the history of the island, pop along to one of the museums. At the Canadian Potato Museum, you can make your own potato fudge and learn all about the traditional harvest of the area. Grab a lobster-topped baked potato with a side of poutine on your way out.

For art aficionados, the Confederation Centre Art Gallery is home to more than 17,000 works, primarily by Canadian artists. Opened by Queen Elizabeth II in 1964, on the 100th anniversary of the Charlottetown Conference, it is now a hub of artistic expression at the heart of the island.

If literature is more your thing, head to Green Gables in Cavendish – a picturesque 19th-century farm that served as the setting for the Anne of Green Gables novels by Lucy Maud Montgomery. 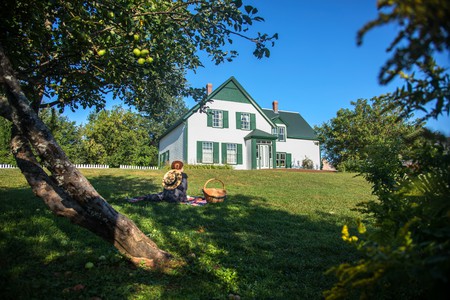 For literary fans, a visit to Green Gables Heritage Place, in Cavendish, is a must | © TPEI

Ready to start booking your trip to this wonderful part of Canada? Check out our bookable experiences, request a custom itinerary, and explore more about Prince Edward Island.