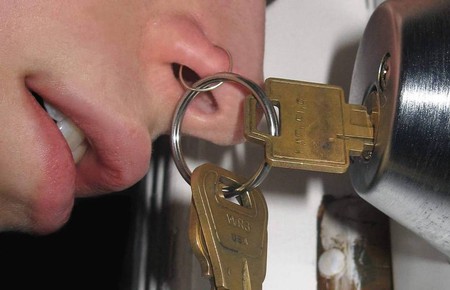 Montreal-based creative Gab Bois is freaking out the internet in the best way possible with her super stressful photos of conventional objects being put to extremely unusual, non-conventional use.

The artist, who is an ex-art student, specialises in close-up photography, but also has experience with illustration and painting. Gab’s Instagram is brimming with such close-ups, which basically will make you squirm, cringe or if you’re lucky, both at the same time.

Using her own body as a canvas, she snaps pictures of everyday objects doing unimaginable things – think a needle and thread sewing a broken nail or lighted candles being used as nipple covers. Her photos shock, but they also inspire, giving insight into a creative mind that seems to know no bounds.

Gab’s photography is digital and conceptual, gleaning inspiration from dystopian art film and feminism among other things. Her goal in the work is to make people uncomfortable and in this she definitely succeeds! She also wants to push the boundaries of traditional photography, which we have to say, she surely does as well.

You can look but you can't touch

Beyond this, Gab also asks you to consider – and perhaps even work to change – the world in which we live through the themes in her work. A pair of female lips with metal snap closures on them, for example, speaks to society’s apparent obsession with trying to shut women up.

Trick or Treat Yo Self

A pack of birth control tablets with the pills swapped for googley eyes alludes to women being constantly spied on by the patriarchy.

2.0 version of the Eye-popper birth control

A bathing suit stuffed with half watermelons in the bum reminds us of our obsession with body image and alteration.

But whether or not you care to look this deeply into the work, the fact of the matter is it will still make you feel something and that is what great art is all about.