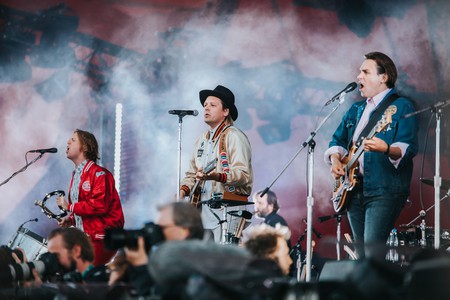 If you’ve been wondering whether fidget spinners are the future of music sales and distribution, Arcade Fire might make you a believer.

The Canadian indie rock group premiered its fifth studio album, Everything Now, on July 28 to mixed reviews. Leading up to its release, the band pushed out a few pot-stirring promotional stunts, like the dress code for a recent Brooklyn set that demanded attendees to look “HIP & TRENDY” (no shorts, no large logos, no flip flops, no baseball hats, etc.), and warned denial of entry to those who did not comply. Unsurprisingly, the dress code was quickly pulled.

Now, Arcade Fire has decided to shoot for some “cool dad” points by releasing a fidget spinner. Coming in hot at the price of $109, the trendy item bears the Everything New logo on its center, and includes a USB stick containing the band’s new album.

However, as the band’s tweet mentions, there was an extremely limited supply of fidget spinners, and their website states they are currently sold out. However, in a few weeks, Arcade Fire stans (and/or fidget spinner stans) should be able to bid for one online at a significantly higher price.