An Introduction To Grimes In 10 Songs 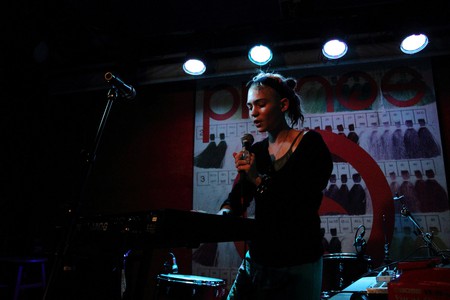 Claire Elise Boucher – now better known as Grimes – is Canada‘s 28-year-old master of synthpop, experimental pop, and electronica. Born and raised in Vancouver, Grimes moved to Montreal for school; it was there that she started to explore the genre of grime music and eventually started producing her own. Grimes’ voice is one of the most distinctive features of her style: simultaneously ethereal and sometimes a little unsettling. As a singer, songwriter, and producer, Grimes doesn’t shy away from exploring personal, social, and political issues through her lyrics. In many music videos (especially in Art Angels), her brother Mac Boucher has worked with Grimes to achieve perfect visual portrayal through beautiful cinematography. Truly versatile, Grimes’ style shifts between each song, and the diversity between Visions and Art Angels is spectacular. Whether it’s about climbing the mountains of ‘Realiti,’ or exposing sexism and objectification of artists in ‘California,’ Grimes has much to say about life, and her success proves we’re ready to listen.

A split EP between Grimes and musician d’Eon, ‘Vanessa’ is a mysterious song featuring soft floaty vocals with an unsettling yet catchy vibe. With various chords from a piano and multiple vocal layers, the song features a unique sound.

The first song to break her way into the scene, ‘Genesis’ features a marriage of keyboard and synthesizer with tasteful harp notes. In ‘Genesis,’ Grimes self-directed the video and used The Seven Deadly Sins and the Four Last Things from painter Hieronymus Bosch as inspiration for the Catholic and medieval imagery.

Off of Visions, this song features a catchy beat with a flowing vocal layering. Contrasting her voice with various electronic sounds creates a melody that is seldom heard in mainstream music.

Crash a stadium event, let someone walk through the shoot, and play music from a boombox? It sounds like a weird set for a music video, but Grimes just makes it work, and it fits right into her style. In addition to designing her own album artwork, Grimes often directs her own music videos and co-directed ‘Oblivion’ with Emily Kai.

‘Go’ features a strong club beat, superimposed on top of Grimes’ unique voice. Upon release, the song was polarizing for fans but was well received as one of Grimes’ musical evolutions. Bonus fact: David Hayter (the voice actor for the popular game series Metal Gear Solid) voiced the introduction, and Grimes is a big fan of his work.

At first, the track was released unfinished. However, while Grimes was on tour in Asia, she couldn’t pass up some great shots for a music video; at the time, ‘Realiti’ was the only song that seemed to complement the landscape. Since being uploaded, it has gained 12.5 million views and is a favourite among fans. Due to high demand, Grimes finished ‘Realiti’ and included it in Art Angels.

With the release of her Art Angels album, Grimes presented a big change in style – moving from the realm of experimental towards pop. Boucher stated she always had a longing to make pop music, and Art Angels was a step in that direction. Art Angels is expressed through the multiple personas Grimes embodies for more ways of self-expression further fragmented from reality – featuring Skreechy Bat (the primary perspective of Grimes during the writing process), I.V. (demon album leader), Kill V. Maim (vampire), and Rococo-Basilisk (Marie Antoinette-like Grimes).

‘Flesh Without Blood’ from Art Angels features all the personas that Grimes has created, in one video. The song is an unapologetic statement of evolving her art style, and she has a lot of fun doing it. There is still a distinctive sound that Grimes has always been known for, which can be heard even though this song has evolved beyond her previous style. Boucher learned to play every instrument featured in the song and produced it herself.

Filmed in Toronto’s old Bay Station, the song features the vampire of Grimes partying with her crew. The song highlights a darker and more chaotic sound, contrasted with her angelic voice in the bridge of the song.

With what sounds like a pleasant, light-hearted song on the outside, ‘California’ actually has some serious undertones about the entertainment and talent industry. Boucher has stated that the hate track isn’t specifically about California but rather an online publication which has written about Grimes before.

Needing a rapper for this track, Grimes found out about Aristophanes – a Taiwanese rapper – and asked to do a collaboration. This resulted in a chaotic song with screaming vocals and an intimidating rap delivered with an attitude.