An Introduction To City And Colour In 10 Songs 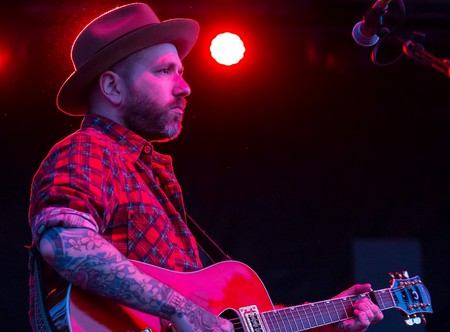 City and Colour, the aptly named alias of Canadian singer-songwriter Dallas Green (quite literally, a city and colour), has been a mainstay in Canada’s acoustic-folk scene for over a decade. While Green may have gotten his start in the post-hardcore music scene, he’s now best known for a melodic sound, acoustic guitar, and heartfelt lyrics. Green has mentioned that while his songs are famously heart-wrenching, he believes there is always some hope present in them. Discover City and Colour through 10 of his best songs.

City and Colour began releasing songs online for fans, as a side solo project. At the time, Green was a member of the post-hardcore band Alexisonfire, which he left in 2010 to focus on City and Colour. These online songs were rewritten to make Sometimes, City and Colour’s first album in 2005. The CD was released by Vagrant Records in physical form for the first time in the U.S. in 2009.

While Sometimes has more of an acoustic vibe, City and Colour’s second album introduces new instruments (banjo, harmonica, drums) resulting in a more folk-y sound. Bring Me Your Love is named after a short story written by Charles Bukowski, which Green saw while on tour.

City and Colour adopted a more upbeat tone for its third album, Little Hell, released in 2010. It was followed by two more, The Hurry and The Harm (2013), and his latest, If I Should Go Before You, which came out in 2015.

City and Colour’s talents have been well received: each of his albums has gone Platinum in Canada at least once (twice for Little Hell, which also went Gold in Australia); his songs have been featured on TV shows; he’s won multiple Juno Awards in several categories (Songwriter of the Year, Single of the Year, Alternative Album of the Year, Artist of the Year…); and nabbed spots on both the U.S. Billboard and the Canadian Albums Chart.

And with that, an introduction to City and Colour in 10 songs…

‘The Girl’, the hit song about leaving someone behind on tour, starts off slow with the musician’s signature acoustic sound and earnest lyrics, before upping the tempo and adding backup vocals.

Featuring the singer from The Tragically Hip, Gordon Downie, ‘Sleeping Sickness’ is one of City and Colour’s most famous and heartbreaking songs. To make this story even more Canadian with a dose of hockey: ‘Sleeping Sickness’ was used as the soundtrack for a video tribute at the end of the 2009 Stanley Cup Playoffs.

Featured on City and Colour’s first album, Sometimes, this song’s title is a reference to a line from the 1992 movie Wayne’s World, and has all the elements of the classic City and Colour acoustic sound.

Green’s preference for sad music is clear in this song about his parents’ attitude about life. ‘The Grand Optimist’ gradually adds more instruments as the song goes along, combined with poignant lyrics.

Another hit from Sometimes, ‘Save Your Scissors’ maintains the heartfelt feel that so many of City and Colour’s songs exude.

From the most recent album, If I Should Go Before You, this song boasts electric guitars, a bass, and percussions, standing out slightly from City and Colour’s expected sound.

With heartbreaking lyrics, ‘Forgive Me’ is an apologetic breakup song with an intimate feel created by the combination of the acoustic guitar and the musician’s voice.

Taken from The Hurry and the Harm, this song is the opposite of an ode to California, with lyrics focusing on why Green could never live there.

Another song from If I Should Go With You, ‘Lover Come Back’ combines drums and electric guitars, giving it a more rock style, rather than City and Colour’s usual’s folk vibe.

Starting off with a solid drum beat, ‘The Lonely Life’, also from The Hurry and the Harm, focuses on what Green sees as the writer’s life.

Painting a world map of all the places he’s been through his lyrics, Green sings about desperately coming back and searching for a loved one, over a melodious guitar.