An Introduction To Arcade Fire In 10 Songs 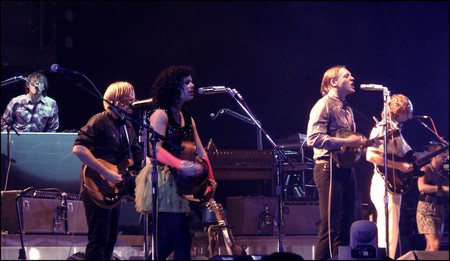 What’s the difference between “indie” or “alternative,” when it comes to defining your genre of music? Every person’s definitions will be different; these words have been stretched so thin in every direction that they’ve become barely more than blur. Luckily, there are always certain bands pushing the boundaries of their genre limitations, redefining what it means to be indie, rock, alternative, or pop. One such example is Arcade Fire. Out of a minimal lineup, the band has been able to produce massive, orchestral albums that span baroque and grand to the stark and straightforward. The following songs help you get to known the astounding variety of sound Arcade Fire has created over the last decade.

Introducing their decidedly morbid debut effort Funeral, “Neighborhood #1” becomes entirely engrossing as soon as you happen upon its first flickering piano notes. While exploring the heart-racing passion (or life-shattering dangers) of true love, the song continuously builds into more and more of a romping rock number, with Win Butler’s singing turning into desperate wail (“then we tried to name our babies, but we forgot all the names we used to know”).

Neon Bible’s closer “My Body Is A Cage” is the ultimate reflection on our age, one at times devoid of empathy and emotional connectivity. The head-filling organs (a constant theme on the record) dramatically play out to the effect of Butler’s fears and worries (“I’m living in an age, that screams my name at night, but when I reach the doorway, there’s no one in sight. I’m living in an age, that laughs when I’m dancing with the one I love”). Meanwhile, the guitars push out a gritty American rock that you would expect to hear on a Black Keys album, giving the song an extra kick of listenability and intrigue.

Serving as the lead track to their third album of the same name, “The Suburbs” starts out in a curiously positive, happy-go-lucky tone. Surely enough, however, Butler brings everything back into an analytical, darkly poignant scope. This song introduces the conceptual framework of The Suburbs, reflecting on the emotional trauma of recognizing suburbia’s transience in the face of romanticization and nostalgia: “and all of the house they built in the seventies finally fall, meant nothing at all… Sometimes I can’t believe it, I’m moving past the feeling.” Suddenly, the catchy piano progression and humming strings become haunting.

Perhaps the best sonic encapsulation of Funeral’s themes of death, this song is a thumping, catchy piece of straight up indie rock. Here, Butler’s lyricism truly shines: “People say that you’ll die, faster than without water, but we know it’s just a lie, scare your son, scare your daughter.” Over the song’s infectious five minutes, Butler ultimately comes to terms with the transience of life and the inevitability of death. It’s pretty eloquent way to get through such weighty topics, all things considered.

“Ocean of Noise,” is an immediate ear-grabber. It opens with the sounds of a vicious storm, and quietly slides into a country-inflected guitar lick reminiscent of Johnny Cash, and then switches over to massive piano and organs! This song comes from their career-catapulting sophomore album Neon Bible, and these two instruments were absolutely essential to the overall tone of this album, which came to the greatest fruition on this song. The strings and vocal harmonies evoke the melodrama of early 70s love songs, the pianos give it a ghastly, empty church bellow, and the bass yanks everything forward through a modern indie rock lens. It’s hard to believe such a seemingly-cacophonous combination could sound so wonderful.

“Sprawl II” was certainly Arcade Fire’s most obvious hint of where they were headed — this song is built almost entirely off the foundation of quaint, melodious synth leads. It almost immediately conjures Depeche Mode and Blondie, but totally still retains their own sonic sensibilities. Furthermore, Regine Chassagne takes the lead on vocals, and it is a wonderful change of pace. This track really feels like the best possible bookend to a golden era of indie rock that they themselves helped create.

Even if The Suburbs hinted a more synth-driven sound, nothing could have prepared the world for their follow-up Reflektor. Sprawled across two (and eventually three) discs, this album is Arcade Fire’s first real creative left turn, and while some of it gets bogged down in outlandish experiments, tracks like “Reflektor” display their ability to explore and still pull off great songwriting. Over its seven and a half minute run time, “Reflektor” feels like it’s more immediately influenced by deep house and Daft Punk than noted influence Neil Young. Regardless, their sound is certainly pushed beyond their limits with this one, employing all kinds of vocal effects, synth tones and saxophone. What better way to prove that “indie” and “alternative” can be whatever you want it to?

“Joan of Arc” slingshots in the completely opposite direction of “Reflektor.” This song ends disc one of Reflektor with a borderline-clunky rock number that sounds equal parts of Yes’s prog-mania and semi-early punk flair. After a record like this, it’s hard to imagine what they’re going to come up with next.

While Arcade Fire have proven countless times their knack for songwriting, “Ready To Start” is quite possibly the catchiest, most masterfully-executed song they have ever penned. Every element of the song is so simple, yet so enveloping. The guitar pulses its own post-punk-inflected singularity underneath new wave synth flashes, all of which lead to a hummed explosion of string harmonies, and the booming echo of Win Butler’s voice.

One of the deep cuts from The Suburbs, this song offers some of Butler’s most innocent, heartfelt contemplation on suburban living and the overwhelming imminence of change: “Now our lives are changing fast, hope that something pure can last.” The song grows into a titanic wall of sound that serves the very best of Arcade Fire’s rock-minded songwriting, all before coming to a grinding halt, leaving only one jagged piano chord to last through the echo.