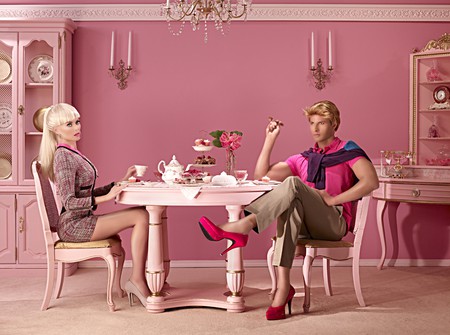 Breakfast from In The Dollhouse | © Dina Goldstein

Dina Goldstein, a Vancouver based photographer and Pop-Surrealist artist, has been carving strong impressions on the visual arts scene in Canada and beyond. With her Fallen Princesses, In the Dollhouse, and the most recent Gods of Suburbia series, her photography – visually striking, large-scale tableaus – explores, satirizes and philosophizes contemporary society. Following her last show in Vancouver, we caught up with Goldstein to discuss her work, upcoming shows and sources of inspiration.

Tell us something about your life journey and your discovery of photography as a medium to tell your stories.

My family emigrated from Israel to Canada in 1976. Back then Vancouver was still a pulp and paper town with very little going on. As a newcomer to Canada I became a keen observer. I learnt the language and Canadian ways rather quickly. Still the integration was difficult and I had to deal with much schoolyard bullying. I enjoyed drama in high school and experimented with acting for a while. I became enamored with photography while on a trip to the Sinai desert. I came back from Egypt and enrolled in photography classes, I was 21 and began to shoot non stop. At that time I was surrounded with friends who were actors, musicians and artists…I was able to practice, learn and provide them with much needed promo material. This is also the time where I met and married my husband Jonas (a filmmaker).

Storytelling has always been central in all of my work past and present. I started out as a photojournalist and traveled to war torn areas. My work moved towards documentary photography which allowed me to create and share the stories of Palestinians in Gaza, gamblers at the racetrack, East Indian blueberry farmers in B.C, dog shows, bodybuilding state championships and teenagers dirty dancing at a Bar Mitzvah. I began shooting portraits for local, national and international magazines. 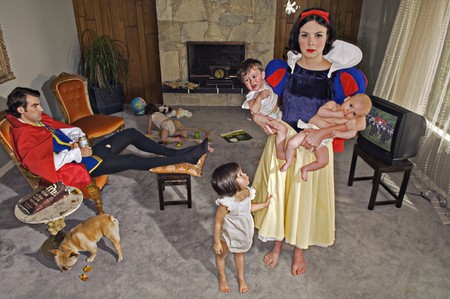 What inspired you to create the highly successful Fallen Princesses series and the subsequent body of work?

My daughters, social observation and my own outlook on contemporary life are a great source of inspiration for me. Fallen Princesses was inspired by observations of my own daughter, who was enamored by Disney princesses. I photographed Fallen Princesses, which was an unexpected internet success. When my daughter Jordan was four, she began to talk about Disney princesses. At that time my mother discovered that she had breast cancer. The two events collided and made me wonder what a princess would look like if she had to battle a disease, struggle financially, or deal with aging. I began to imagine what could happen to the princess later in life and after the “happily ever after.” Naturally they would have to deal with challenges that all modern women face. My first idea was Rapunzel going through chemo and loosing her precious hair. I began to loosely sketch and came up with ideas for the rest of the images. With a very limited budget and a lot of volunteer help, I shot the 10 piece series over two years, 2007 through 2009. 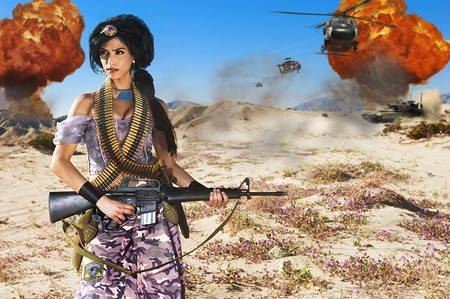 With continued inspiration from my daughters Jordan and Zoe, I went ahead to create my second large scale project and a sequential narrative In The Dollhouse. Observing how they role played with Barbie dolls got me thinking about current imposed gender roles and how young girls are subconsciously bombarded with messages of unachievable beauty ideals.

I collected a brilliant crew and we built a life-size dollhouse where I re-imagined the ideal married life of Barbie and Ken. Within the 10 part sequential narrative Ken embraces his inner desires and comes out as gay and Barbie has a breakdown where she sheds her beautiful long blond hair.

Breakfast from In The Dollhouse | © Dina Goldstein

My third large scale project is my most ambitious effort to date. With Gods Of Suburbia I examine the notion of religion within modern forces of technology, science and secularism. The series plays with narrative and religious iconography in order to communicate how organized belief has become twisted within a global framework driven by consumerism and greed. The project challenges the viewer — religious or secular — to embark on a journey of self-reflection as they contemplate the relevance of dogma in modernity. I look at religious narrative in the same way that I view fairy tales. Religious narrative uses the same tools of storytelling but is perceived as reality. Religion lies more in the collective consciousness, but through dogma it channels images which inevitably pass from the collective unconscious into the minds of people. 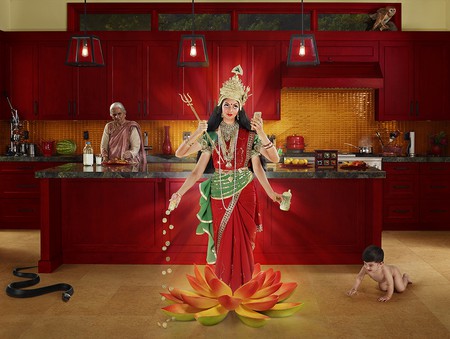 My current work Modern Girl was inspired by my experience growing up as an immigrant in Vancouver, which is now regarded as the gateway to the East. The impact of Asian culture has been profound, not only on the city but on me as an individual and artist. As an immigrant from Israel, learning to fit in was stressful, however, I realized that the challenges facing my young Asian friends in Vancouver were even greater. They were torn between familial demands of obedience and academic achievement — in opposition to the Western ideals of self-expression and individualism. I examine this thorny pull of cultural dualism by reimagining vintage posters from 1930s China. The ‘Modern Girl’ image first appeared in the West and was notable for its bold sexuality, with scantily clad women selling everything from clothing, soap and cigarettes to army recruitment. Chinese pin-up girls also began to appear in magazines and posters. More conservatively dressed in silk cheongsams and smooth chignons, these models nonetheless radiated sensuality. Modern Girl, in fact, was inspired by Chinese historians Tani Barlow and Madeleine Yue Dong, who theorized that this Asian version was an extension of a global phenomenon launched by multinational corporations and disseminated by mass media, whose effect was to emphasize Western imperial dominance.

Which is your personal favorite piece of work ?

It’s difficult to choose one favorite piece but Rapunzel is the piece that began my journey into the world of Tableau Vivant. I can remember the most difficult shoot was of Princess Pea when I was nine months pregnant, shooting at a garbage dump with a multitude of mattresses and unbearable heat. Ariel had to hang from a wire for hours and this required immense body strength. 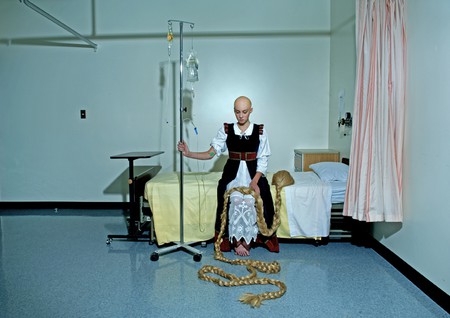 In the Dollhouse was built on a set over the period of a month. It was a completely different experience, where I was able to have total control without outside interruptions. Gods Of Suburbia was photographed on various sets which posed many challenges. The creative elements were more sophisticated and every detail was carefully examined. This was by far my most cerebral effort. I built a large set for The Last Supper, which was photographed in ground zero in the Downtown East Side. My set consisted of 12 apostles and a dog. The table was full of beer and food that somehow disappeared every so often. Despite this, I am pleased with the result! 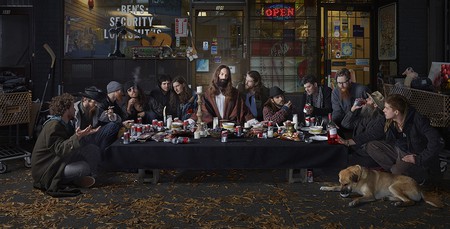 The Last Supper from Gods of Suburbia | © Dina Goldstein

What are the three quirky things people have told about your work?

“Goldstein’s scenes are no longer happened upon but diligently arranged, though the artifice is still meant to be cut from the coarse cloth of social reality. As a surrealist, Goldstein knows that beneath the smooth, polished surface of our popcultural age, the truth is writhing to be set free. Her work is intended to – and does – provoke debate. It’s intentionally theatrical but has an honest message. Every image is brilliantly composed, thoughtful and compelling.”

“If the Grimm’s tale condemns the Queen for her attempts at staying a youthful beauty, Snowy’s dull reality renders the opportunity to be an old woman in killer red hot heels an appealing option.”

“The princesses in her photos are fallen because they had fallen for the Disney images and societal norms that are perverse or destructive for women. (Not to mention men.) They cut to the core of alienation and banality in our glitzy lives.This does not mean that there is no happiness after the happy ends of classical fairy tales, but her photos imply that women (and men as well) must be on the alert in the society of the spectacle not to believe the images imposed on us, but to create our own narratives and representations.”

What kind of emotion do you aim to evoke in the viewers?

I notice that people smile when they look at my work. If they get it, they smile! For those that appreciate satire it sparks a real conversation. Then there are also various interpretations, which are also welcome.

Gods Of Suburbia portrays many deities from different religions. How did you narrow your selection?

Gods of Suburbia presents a range of deities, from mainstream as well as ‘fringe’ religions, which act as the embodiment of moral aspirations. Their place in modernity is filtered through the lens of irony and Pop-Surrealism — a fetishistic manipulation of faith to attain a political, economic or personal objective in combination with pop art’s celebration of the packaged good.

As a cultural critic of sorts I am interested in generating a rational conversation about religion and the role it plays in modern society. By placing each supernatural character in a real life environment I attempt to humanize them, and explore more practical issues. Lakshmi, the Hindu goddess of beauty and wealth is a perfect example of how women today shoulder the responsibilities of home and work and Ganesha, the remover of obstacles, easily recognizable by his elephant head and human body, embodies my personal experience as an immigrant to Canada. With Satan I question what counts as fair within society today, and Xenu scrutinizes those that interfere with free thinking. So there is a central message that splits of into many parts. 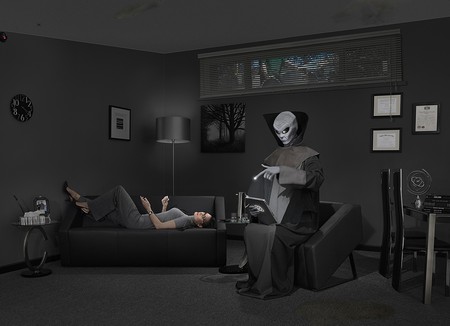 Can you share something about your upcoming series Modern Girl?

Modern Girl extrapolates upon past themes of commercialism and identity within Western culture by creating photographic diptych portraits in the style of the famous ‘pin-up girl’ advertising posters of 1930s Shanghai. I am inspired by this era for two main reasons. Firstly, it heralded the emergence of women as individuals, as they began to break away from centuries of oppressive Confucius tradition that demanded total filial piety alongside such crippling beauty practices as foot binding. The shift to this popular image of the modern woman signaled the commoditization of the everyday and de-radicalization of modernity.

What is the big impact you wish to make through your work?

Much of my work investigates the myth of perfection and the collective perception influenced by pop culture. Western society today is influenced by pop culture, which tells us how to look, what to like, what to buy. Most people don’t even realize the effects of the unconscious collective that drives us to behave in certain ways. Perfection is not stable or sustainable in nature and in life. Also there is an individual perspective about what is ‘good’ or ‘perfect’. This is mainly the reason that I work with archetypes and stereotypes, to relay my messages and offer some social critique. By twisting the storylines of beloved characters I am able to provide some insight into the human condition, and expose the many flaws in the nature of humankind.