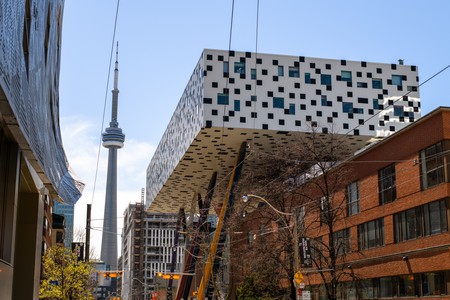 Starting with Ludwig Mies van der Rohe’s majestic Toronto-Dominion Centre and finishing up at the top of the CN Tower, take this tour of Downtown Toronto to discover its diverse cityscape of soaring skyscrapers and striking 19th-century landmarks. 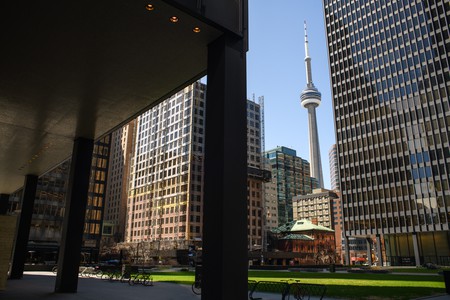 Fortresses of steel and glass, this brooding duo of 1960s skyscrapers by Modernist architect Ludwig Mies van der Rohe marked Toronto’s arrival on the world stage, symbolic of the city’s fast-paced progression and innovation. While the design is very much of the International Style, the towers of the TD Centre are also timeless, with an unexpected grace that supersedes their Mid-Century Modern roots. Canadian architect Phyllis Lam­bert, who recommended Mies van der Rohe for the job, commented that the complex was “architecture of repose” due to its restrained use of materials. 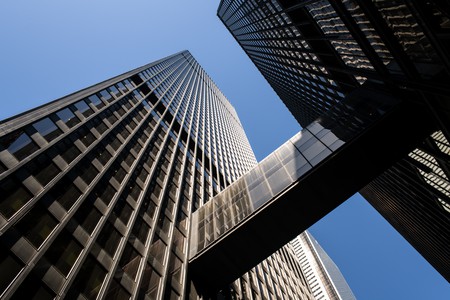 This foreboding Art Deco building on Bay Street formerly housed the Toronto Stock Exchange and was hailed as the most modern trading floor in the world when it opened in 1937. A mix of Art Deco and Streamline Moderne, the seemingly simple yet impressive facade is worth a closer look – don’t miss the frieze carved into the pink granite entrance, designed by Canadian artist Charles Comfort. Today, the building is a perfect home for Toronto’s Design Exchange – Canada’s premier design museum with ever-changing exhibitions covering various aspects of the industry. 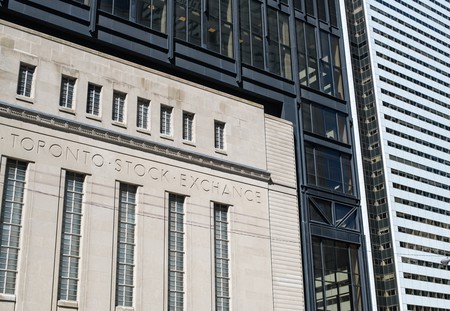 Before you head down Wellington Street to the next stop, take a detour to King Street West and gaze upwards at the third-tallest building in Toronto – Scotia Plaza. This extravagant skyscraper is made from 28,000 pieces of red napoleon granite, cut and polished by Italian craftsmen. If you get a peek inside, there’s a 100-foot (30-meter) mural in the lobby – the largest indoor mural in Canada. 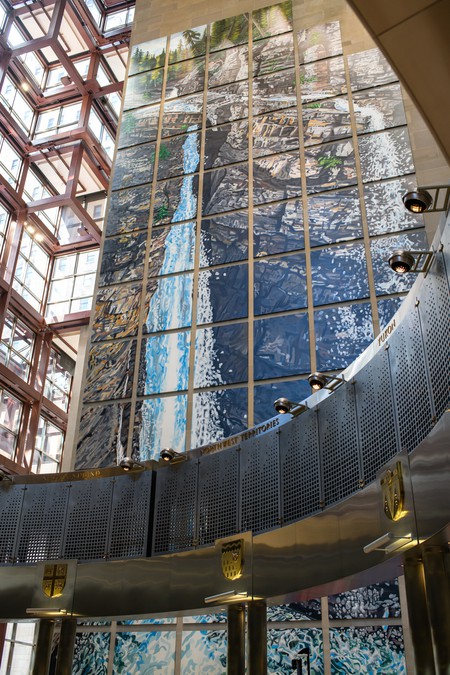 If you’ve been to New York, you’d be forgiven for doing a double take as this ultra-slim building bears a striking resemblance to Manhattan’s Flatiron Building and sometimes even goes by the same name. It was originally the offices of Gooderham & Worts distillery, until the 1950s when it was sold by the family firm. It was bought and restored in the 1970s, declared a historic site in 1975 and is still used as offices to this day. If you fancy a tipple, head down into the building’s basement pub, The Flatiron: A Firkin Pub, and before you leave, take a quick look around the back of the building to see the intriguing trompe l’oeil Flatiron Mural by Canadian artist Derek Michael Besant. If you’ve got time on your trip, Toronto’s repurposed Distillery District down the road is worth an afternoon jaunt in itself, with its hipster cafés, restaurants and artisan shops. 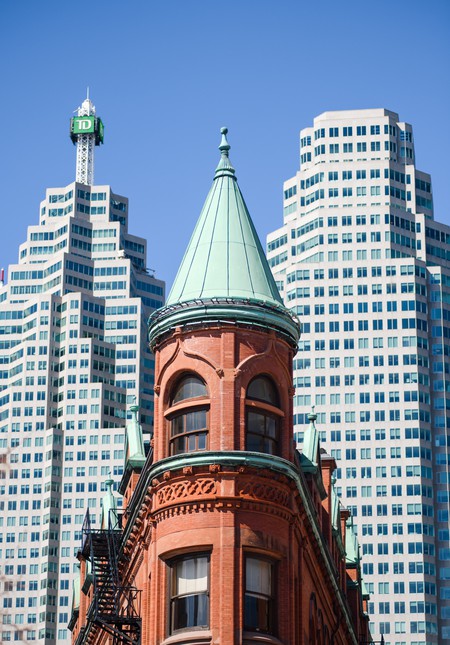 This Renaissance Revival-style building designed by William Thomas was the first meeting hall in Toronto, opening in 1850. Situated on King Street East, it became the social hub of the city, with its 1,000-seat assembly room used as an elegant meeting place for the social elite, hosting events from recitals by international talent to gatherings for abolitionists. As bigger venues cropped up in the city in the late 19th century, St Lawrence Hall was dismissed in favor of others, such as Massey Hall, and gradually fell into disrepair. However, in 1967, it became a National Historic Site and was restored as part of Toronto’s celebratory centennial project. To this day, it is still used as a premier events venue – tours are available by appointment. 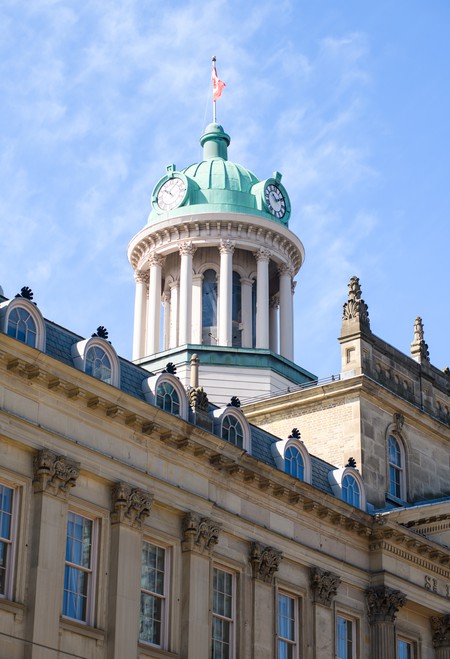 The next stop is one of St Lawrence Hall’s successors, Massey Hall, which has garnered a reputation as Canada’s most iconic performing arts venue, with the likes of Winston Churchill and Bob Dylan treading its boards. Designed by prominent Canadian architect Sidney Badgley in the late 19th century, the Palladian-style building on Victoria Street has some quirky original features, including a set of Moorish-inspired fireplaces. Currently undergoing extensive renovation work, the venue will get a seven-story monolithic black-box extension to the rear, due to be completed in 2020. The restoration will also see the return of the original 125-year-old stained-glass windows and glass walkways added to its red-brick exterior. 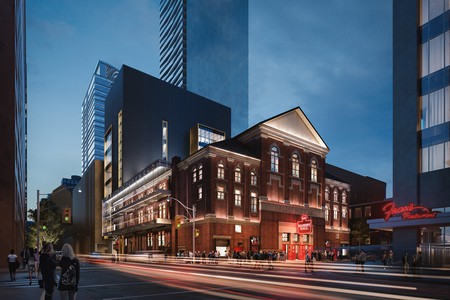 Located on Queen Street West, this striking Romanesque civic building is the masterpiece of architect Edward James Lennox, who was responsible for many of the city’s iconic buildings, including the Neo-Gothic Casa Loma, the luxurious King Edward Hotel and the former Bank of Toronto on Yonge Street. The 340ft (104m) clock tower is indisputably the building’s crown jewel, with its 20ft (6m) clock face, which was made in Croydon, Southeast London. Near the building’s entrance, you’ll find several grotesque faces carved into the stonework, including Lennox’s own resemblance – look out for the distinctive handlebar mustache. The hall’s unusual two-tone ornamental facade is made from sandstone; it took 1,360 rail-car loads to get the material to the site. 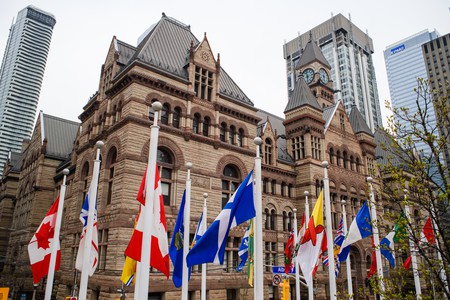 Art Gallery of Ontario (AGO)

A distinct contrast to Toronto’s 19th-century buildings, this huge art gallery designed by internationally acclaimed architect Frank Gehry holds 95,000 works, ranging from the first century to the present day. Its defining feature is the imposing glass-and-wood facade that spans 600ft (183m) along Dundas Street, allowing passers-by to peer into the AGO and those in the sculpture gallery to look out. Head inside to see Gehry’s dramatic sculptural staircase that spirals upwards from the second floor, linking Walker Court to the new center for contemporary art. 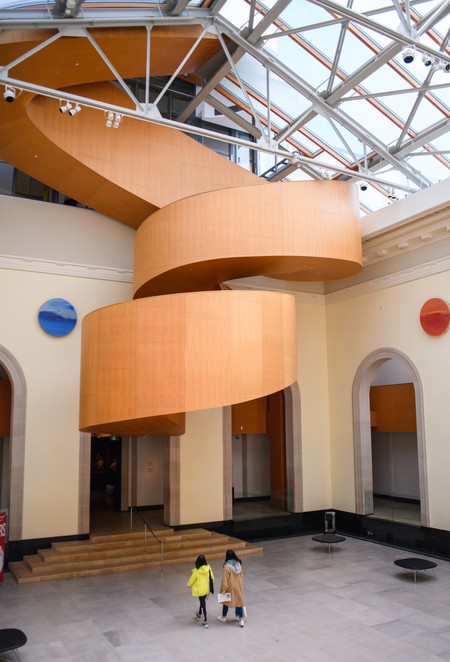 Be sure to take time to visit Will Alsop’s Sharp Centre for Design on nearby McCaul Street. The bonkers Postmodern extension floats above the original Victorian streetscape, with its pixelated black-and-white box ‘tabletop’ design supported by 12 multicolored legs. This daring addition received RIBA’s Worldwide Award when it opened in 2004, with the jury describing it as “courageous, bold and just a little insane.” 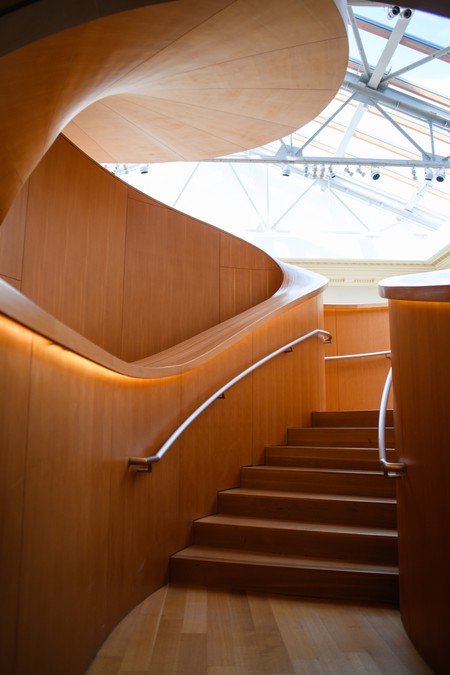 After a long walk down John Street, you’ll be rewarded with views of Toronto’s most iconic building, the CN Tower. Piercing the Toronto skyline at 1,815ft (553m), the 1970s landmark has become the city’s main attraction, with 1.5 million visitors taking in its incredible views of the city each year. In 1995, the tower was classified as one of the Seven Wonders of the Modern World by the American Society of Civil Engineers and remains the ninth-tallest freestanding structure on Earth. Now an irreplaceable status symbol of Toronto, it was initially built as a practical solution to a problem. As skyscrapers soared across the city in the 1960s and ’70s, they heavily interfered with broadcasting signals, so the CN Tower was built high enough to provide clear reception – residents now have some of the best signals across the whole of North America. 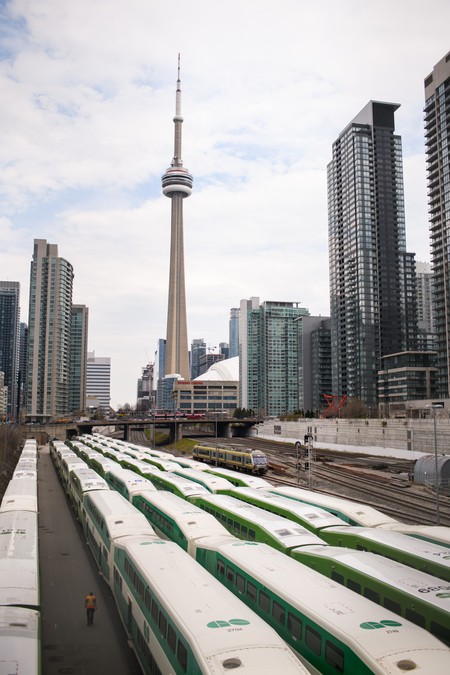