Prince Aga Khan has opened the first Islamic art museum in North America. Designed by renowned architects Fumihiko Maki and Charles Correa, the project is comprised of a 17-acre park, community centre, mosque and a museum which houses hundreds of artifacts from the Muslim world. Read on to discover more about Aga Khan and his revolutionary project. 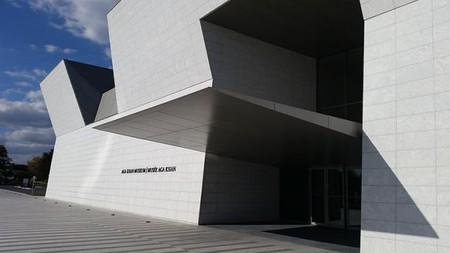 It may come as a surprise that it took until this year for North America to open its first museum dedicated solely to Islamic art, especially considering the fact this project has been in the pipeline for almost two decades! The discrepancy has been fixed, however, thanks to the vision and influence of Prince Shah Karim Al Hussaini Aga Khan. The acting leader of the world’s 15 million Nizari Ismaili Muslims funded the project with $300 million from his philanthropic organization, the Aga Kahn Development Network.

The 10,100 square metre museum houses over 1,000 artifacts found all over the world from the Iberian Peninsula to China. It is already causing a bit of an international stir, not only because it carries the name of its famous benefactor, but also thanks to the famous designers responsible for its structure and aesthetic.

In addition to the museum design by Fumihiko Maki, the project includes a 17-acre park designed by Lebanese landscape architect Vladimir Djurovic and the Ismaili Centre designed by Indian architect Charles Correa. The result has been hailed an ‘oasis of calm and reflection’ by The National, a ‘world-class showcase for Islamic art’ by The Globe and Mail, and an ‘enlightened Islamic cultural fightback’ by Newsweek. 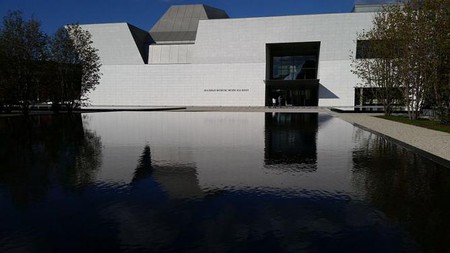 Located just north of downtown Toronto, the sleek, white limestone museum rises out of the lush green park. The design features unusual angles that are reflected in courtyard pools during the day and are lit softly in the evening. The interior also plays with natural light, featuring geometric patterns whose shadows shift over the course of the day.

The permanent collection—parts of which have been exhibited in museums throughout the world since 2007—reflect the diverse geographic and cultural nature of the Islamic world. It boasts manuscripts, paintings, weavings, ceramics, textiles, carvings and a host of scientific instruments. Some of the highlights include an Iranian painting with details so delicate that the artist used brushes consisting of a single squirrel hair; the oldest Canon of Medicine known to existence; a 16th century volume of the epic Shahnameh, and an astrolabe from 14th century Spain inscribed in Arabic, Hebrew, and Latin.

What is even more ambitious than the physical structures and collections themselves is the aim of the project. Educational consultant Patricia Bentley said that their biggest message is to show ‘the diverse nature of Islam, which has always responded to local traditions.’ While most westerners associate Islam with the Middle East, the Abrahamic religion has spread to every continent on the planet with the majority of Muslims today living in Asia and Africa. Though Prince Aga Khan is the spiritual leader of Ismaili Muslims, a branch of Shia Islam with followers from more than 25 countries, the museum houses historic works important to all Islamic sects.

Another critical goal of the museum is to underscore Islam’s ‘social traditions of peace, of tolerance, and of pluralism,’ according to Canadian Prime Minister Stephen Harper, who spoke at the opening ceremony. This is particularly important to remember in times when extremism dominates global news. Luis Montreal, the general manager of the Aga Khan Trust for Culture, told The National that the site is meant to ‘highlight elements of Islam that are largely left out of today’s narrative—pluralism, art, music, architecture, gardens, the exploration of the human self and an innate desire to connect with others.’