Adventurous Things to Try in the Yukon, Northwest Canada 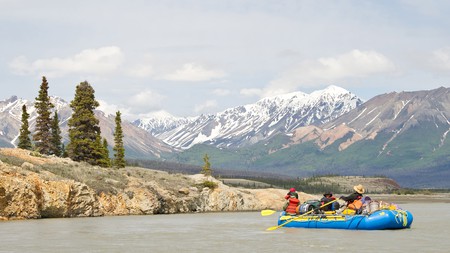 Take a raft down the Alsek River through the vast, untamed landscape of the Yukon | © Josh Miller
Paid partnership with

Stretching northward into the Arctic Circle, the Yukon, in Canada, is synonymous with untamed lands, the rich heritage and traditions of First Nations, rugged gold prospectors and hardy fur trappers. Today it remains a near-immaculate wilderness and few places in North America are so undeveloped, so scarcely populated, so ripe for adventure. Whether you wish to hone your outdoor survival skills, or you’re seeking diverse wildlife encounters, lonesome trails or exhilarating waterways, the Yukon offers countless opportunities to genuinely escape the mundane.

The 1896 discovery of gold in what is now known as Bonanza Creek – a tributary of the Klondike River – began the world’s most famous gold rush. A stampede of more than 100,000 prospectors raced to the Yukon with dreams of mining their fortunes. The path to Klondike gold was far from easy, and only around 30,000 managed to make the arduous trip successfully.

The first hurdle for many was the Chilkoot Trail, which rises from Dyea, Alaska, through coastal rainforest, up to craggy alpine trails and on to dry forests cloaked in lichen. The most notorious stretch is the Golden Staircase, where prospectors climbed 1,000ft (305m) in just half a mile (0.8km), hiking up 1,500 steps carved into the ice. 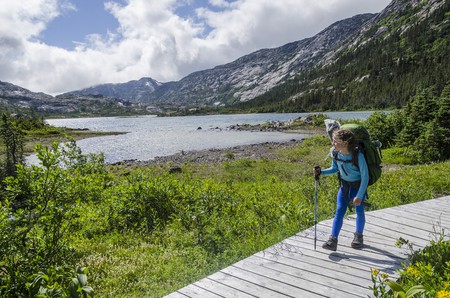 Stampeders were legally required to carry a year’s supply of goods to prevent starvation, so many had to shuttle supplies over the trail up to 40 times. These long relays took up to three months to complete.

Luckily, today you only need to hike this historic 33mi (53km) trail once, which will take three to four days. There are campsites en route and facilities at each site. Just be sure you register with Parks Canada in advance, and keep an eye on Covid restrictions as the trail is currently closed until further notice.

If you’re inspired by the idea of the Gold Rush route but hiking the Chilkoot Trail doesn’t appeal (or isn’t an option), you can always jump on a train and ride the rails on the 100-year-old route from Skagway, Alaska, to the village of Carcross in the Yukon.

With construction starting in 1898 – during the height of Klondike fever – this authentic, Gold Rush-era, narrow-gauge railroad replaced the treacherous Chilkoot Trail as the primary route into the Yukon gold fields when it was completed in 1900. With the same stunning views sliding by your windows, it offers all of the heritage but none of the hardship. 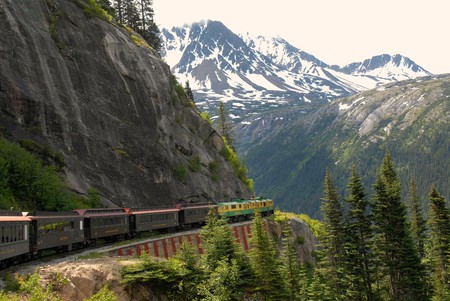 With uncertainty still surrounding Covid-19 restrictions, visitors are advised to check the White Pass and Yukon Route website for the latest service information.

Canoe the Yukon River from Whitehorse to Dawson City

Feel the river rise up around your ankles inside your canoe while – armed with just a wooden paddle – you navigate the churning whitewater of Five Finger Rapids. Glide past curious, tail-slapping beavers and spot lynxes silently slinking along river banks. Discover decaying paddlesteamers that stand as lonely monuments to a bygone era, and spooky, time-capsule trappers’ cabins, abandoned decades ago, and now frozen like sub-polar Polaroids. 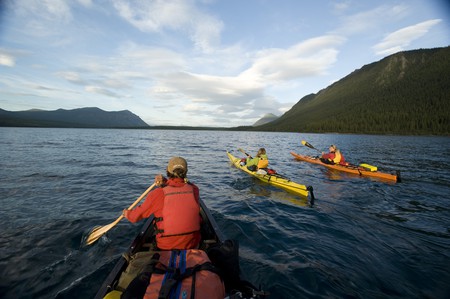 A canoe safari along 444mi (714km) of the mighty Yukon River from Whitehorse to Dawson is a historic journey, as you follow in the wake of 19th-century Gold Rush pioneers, against backdrops of immaculate wilderness.

This 18-day adventure is best undertaken with an experienced guide, not least because it involves wild camping under the midnight sun in bear country.

“You can drink it fast, you can drink it slow, but your lips must touch this gnarly toe.” That’s how the saying goes at the Sourdough Saloon in Dawson City’s Downtown Hotel.

Dawson City – the goal at the end of the Klondike trail – was built on gold dust and has changed little since the days of the Wild West, retaining much of its atmospheric, old-world charm.

The city’s singular “sourtoe” cocktail has just two ingredients: a shot of whisky and a desiccated human toe. Yes, an actual human toe is dropped into your shot. 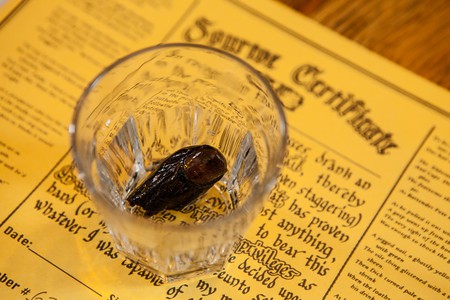 The Sourtoe Cocktail Club began in 1973 when Yukon riverboat captain Dick Stevenson chanced upon an amputated, frostbitten toe – which reportedly once belonged to a Prohibition-era bootlegger – preserved in a jar of moonshine in an abandoned cabin.

Today the bar has around 10 severed toes in circulation, donated from around the world, and nearly 100,000 visitors have taken the sourtoe challenge to earn a grisly certificate of achievement.

With remote ribbons of asphalt disappearing into the distance, the open road beckons in the Yukon. Hire an RV to explore distant highways like a turbo-charged snail, with all your creature comforts strapped to your back, or rent a Jeep fitted with a rooftop tent from Overland Yukon for the ultimate road trip. 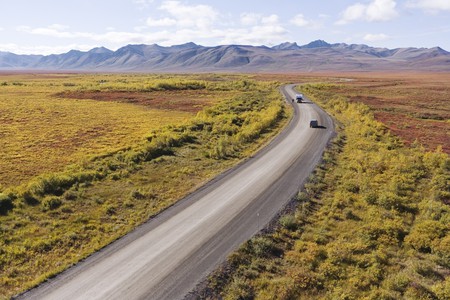 Loosely following a former dog-sled route from Dawson City to the hamlet of Fort McPherson in the Northwest Territories, the iconic – and unpaved – Dempster Highway is the only all-season road in Canada to cross the Arctic Circle.

Beginning 25mi (40km) east of Dawson, the Dempster shoots north for 457mi (735km), winding a sinuous route between the rugged mountain peaks of Tombstone Territorial Park – across great plains, through virgin spruce forests populated with moose, black bears and grizzlies, and into permafrost and tundra. Since 2017, travelers have been able to press on past the town of Inuvik and continue to the very shores of the Arctic Ocean. 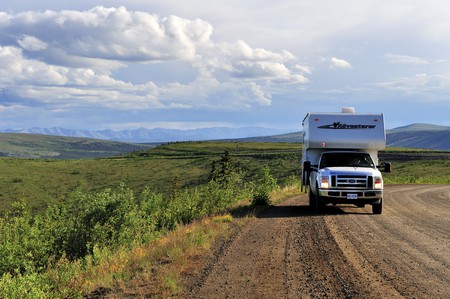 A magnet for hikers and climbers, more than 80 percent of Kluane National Park and Reserve is made up of mountains and glaciers. Highlights of this Unesco World Heritage Site include the world’s largest non-polar icefield and Mount Logan, Canada’s highest peak, which soars to 19,551ft (5,959m).

Adventures, of course, come in many forms, so you needn’t pack an ice axe and crampons to see the top of Mount Logan. You can better appreciate the park’s vast scale and stark beauty from an aerial perspective, by taking a thrilling flight in a four-seater airplane. 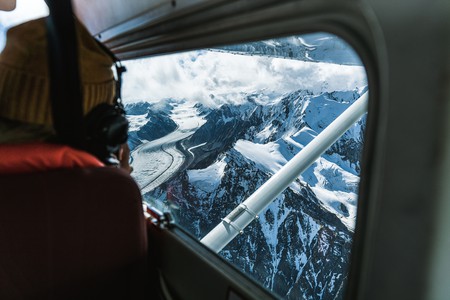 Swift currents, swirling eddies, crashing whitewater, ice floes and calving glaciers are just some of the challenges that await rafters taking on the Alsek River.

Coursing through Kluane National Park and Tatshenshini-Alsek Provincial Park before reaching the Pacific Ocean on the coast of Alaska, the Alsek is a designated Canadian Heritage River and a world-renowned rafting destination. 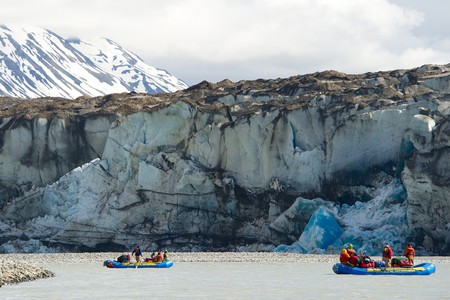 Boasting enough white-knuckle mayhem to thrill advanced rafters, the Alsek has stretches to suit all skill levels, offering relaxed opportunities to take in the stunning scenery and rich wildlife. From your position on the river, you can spy eagles and falcons soaring overhead, watch wolf packs calmly roaming the banks or spot moose looming majestically against frosted vistas.

For those searching for a little more thrill on their travels, Yukon is a true adventurer’s playground. Visit travelyukon.com to start planning your trip, and be sure to check the Covid restriction information and border status before travelling.