Flu is Officially Worse for Men, According to Science 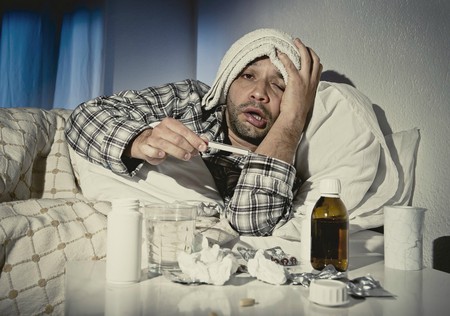 Ladies, you might not want to read this—actually, you might not want the men in your life to read it! Man flu, which is described in the Oxford Dictionary as “a cold or similar minor ailment as experienced by a man who is regarded as exaggerating the severity of the symptoms,” has been a hotly debated topic between the sexes. But thanks to a recent study, there is now evidence showing that man flu, might be a real thing.

The study was conducted by Dr. Kyle Sue, a clinical assistant professor in family medicine at St. John’s Memorial University who says that in addition to the science, he also had a personal motive. “I’ve been criticized for exaggerating my symptoms when I had the flu,” he told CBC News. “I thought, ‘You know what? This would be an interesting topic to look into.’”

The main finding in his study, which was largely conducted on mice, shows that testosterone acts as an immunosuppressant, whereas estrogen stimulates the immune system. This indicates that men are more likely to catch a cold and to experience more severe symptoms.

Before all the men start breaking out the tissue boxes and cold medicine, keep in mind that Sue admits the current research is very limited. Although the research does indicate that men experience worse symptoms than women, he says more work needs to be done to prove his case.