A Very Short History of the Coast Salish People

The Coast Salish people are a group of Salish-speaking, ethnically connected indigenous people living in the Pacific Northwest Coast from the mouth of the Columbia River in Oregon to the Bute Inlet in British Columbia. Archaeological evidence indicates that Coast Salish regions have been inhabited since 9000 BC and today there is an estimated 56,000 Coast Salish peoples living in the US and Canada. Here is a (very short) look at these fascinating histories on Canada’s West coast. 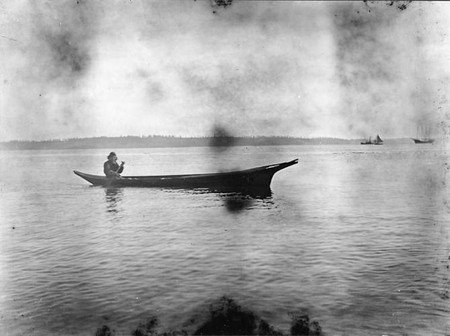 The majority of Coast Salish tribes made settlements in villages on the mouths of rivers, in sheltered bays or in inlets out of the reach of storms. Throughout their existence the mainstay of the Coast Salish way of life has been fishing, which in addition to being a food resource has also been a central part of their ceremonies and legends. Examples such as the First Salmon Ceremony and the Tale of the Salmon Woman have been passed down from generation to generation, highlighting the importance of fish to their culture and economy. Their belief in guardian spirits, in the form of both humans and animals, has also been widely passed down through the ages. As with other Native American tribes, vision quests, journey ceremonies and soul recoveries have been widely practised.

Salish tribes did not traditionally have chiefs. The Headmen of each of the family houses within the village – who are referred to as ‘chiefs’ today – would meet to discuss tribal concerns, but importantly, there was no single tribal head. While the advice of the Headman was often sought by the family or household, these chosen individuals did not have any power to enforce their own judgement upon the rest of the tribe. If individual advice was taken, it was due to the power of the individual Headman and if their idea would benefit the common interest of the tribe. In this way, the Coast Salish peoples were one of the most democratic of the indigenous tribes. 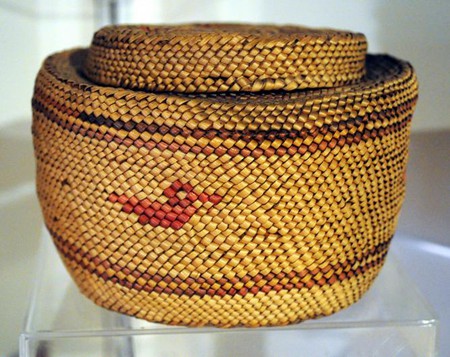 While there isn’t one single group of Coast Salish people, it is not uncommon for Salish people to speak more than one of the Salish languages and dialects. Those who could speak more than one of the dialects were likely to be appointed to higher positions in the tribe, becoming diplomats, traders and translators, dealing more extensively with other tribes. Many of the Coast Salish tribes became interconnected by marriage, extended family adoption, or transferring members from one band to another. Oral accounts were traditionally used to pass down family and tribe histories in Longhouse ceremonies, demonstrating that the power of language was integral to Salish culture.

It was general practice to ‘deform’ the heads of infant children by binding a cedar bark pad tightly against the forehead under a strap tied to the sides of a cradle. This custom was primarily for aesthetic reasons, with a flat forehead and wide face being considered handsome. Other aesthetic attributes included men cutting their hair to shoulder length with a parting in the middle and tying it in a knot when going to work or war. Women tied their hair in two braids on either side of their head from a center parting and at puberty, the eyebrows were plucked and hairline slightly raised as a mark of beauty. They also often walked around naked or in clothing made from animal hides, fur and wool. 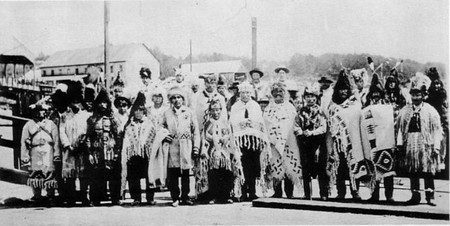 Coast Salish tribes usually had a winter and a summer village – with the winter village being regarded as their permanent residence, used for holding winter ceremonies from November until March – and summer villages or camps considered temporary, used for food gathering, hunting and other important survival tasks.

Shelter consisted of shed, single-pitched, or gabled roof longhouses made from cedar plans and beams. These longhouses held extended families or, in cases of some rarer cases, could house a number of different families – around 100 people in a single dwelling.

Sleeping areas within the longhouse were made of platforms placed three or four feet above the ground and the central area could be used as a meeting or social space. Storage space was situated above the bed platforms and usually held tools baskets and clothing, with firewood being stored underneath. Mattresses, cushions and rudimentary bedding were made of animal skins and woven reed mats, whilst food was hung to dry from the ceiling. Large beams or House Posts on the sides of the longhouse would be painted or carved to depict ancestors, family history or supernatural beings, making existing longhouses useful when looking at the history of Coast Salish art as well as living conditions.

The Coast Salish people had a very active artistic life with many of their creations centred on storytelling and spirituality. The two major art forms are the flat design and carving, as well as basketry and weaving, with these forms being split between men and women respectively. It differs from other Northwestern art in being more minimalist, predominantly consisting of sculptures and paintings depicting crests, shamanic beings and spirits, or woven baskets, blankets, robes and textiles decorated with abstract designs.

Masks were another important part of Salish arts. Mask ceremonies were held regularly, with masks ranging in size and style, the most popular featuring bulging, cylindrical eyeballs, horns representing animal heads and drooping tongues with large feathers. Other examples of Coast Salish art include jewellery, graves, and ritual paraphernalia such as rattles.

In the late 18th century, Coast Salish people began to be depicted in European art, predominantly in painting.

Europeans first arrived in the Central Salish region in 1592 and gradually made their way to the Northern and Southern Coastal regions in the 16th and 17th centuries. The arrival of Europeans brought many changes and problems to the Coast Salish people, including disease, religious change and a decline in traditional Salish culture.

A number of smallpox epidemics, which broke out in the late eighteenth century, led to a population decline of 66 percent in some central regions and some tribes have still not recovered from this loss of numbers. As a result, several languages have come close to becoming extinct, with some being spoken by less than ten people today. 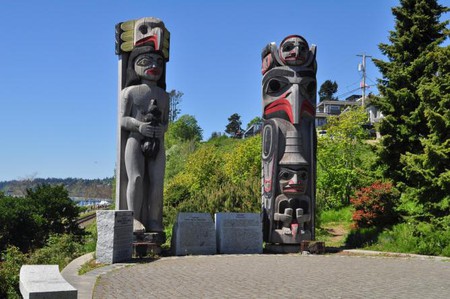 The arrival of Catholic missionaries in the 19th century led to the suppression of several important ceremonies, most notably the potlatch. This was a gift-giving ceremony held to celebrate events such as marriage, a change in or validation of social status, the birth of a child, or a death. Along with the main gift-giving ceremony, an elaborate ceremony was held which involved traditional performance art and dances inspired by dreams, spirits and tales. The ban was lifted in 1932 in the United States and 1951 in Canada, but the ban meant that a generation of tribes had not been exposed to this integral part of their tradition, although several tribes did continue hosting the potlatch in secret.

The influx of Christianity in Salish regions had varying success. As with the relations between Europeans and indigenous peoples in the United States, the government put increasing pressure on the Salish peoples to eschew their traditional religion in favour of Christianity, with some churches being given the authority to annex the land among themselves as part of the Federal Peace Policy in 1869. Following this annexation, many tribes were put on reservations and eventually converted to Catholicism or Methodism.

As with the arrival of Europeans in other areas of North America, the lives of the Coast Salish people was forever changed, with tribes being split up, extensive land and population losses, traditions being discontinued and many of their ancient artefacts being destroyed.

The Coast Salish people are still trying to rebuild their lifestyle after three centuries of displacement. There has been a revival of interest in Coast Salish art and culture over the past decade, with exhibitions being featured in museums such as the Seattle Art Museum and the Burke Museum, inspiration taken by contemporary artists and the creation of new totem poles. Many of the tribes still exist today and they continue to speak traditional languages and exercise traditional beliefs, practices and legends.