A Tour of Toronto's Architectural Landmarks 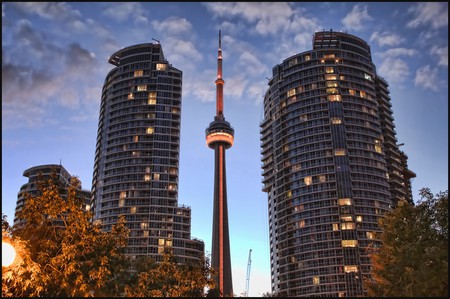 Toronto’s varied architecture offers insight into the city’s cultural and institutional past, to the extent that you can read the history of the city through its distinctive buildings, neighborhoods, and monuments. Going beyond the city’s most obvious structural accomplishment, the CN Tower, here’s an introduction to some of Toronto’s architectural landmarks—including a few that are often overlooked.

Massey Hall is one of the most renowned concert halls in Canada, and holds an important place in Canada’s music history. Completed in 1894, it’s a performing-arts theater located in the Garden District of downtown Toronto that was designed by architect Sidney Badgley. Massey Hall has a Neoclassical exterior façade that features tall Palladian arches, and the interior was inspired by the Alhambra Palace in Andalusia, Spain. The current capacity of the theater is 2,765 seats, and the performances are often sold out. An impressive list of prominent artists and other public figures have appeared on the Massey Hall stage, including Winston Churchill, Luciano Pavarotti, Maria Callas, the Dalai Lama, and Neil Young. 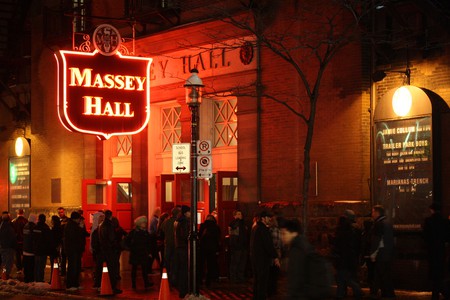 Continuing the musical theme, Roy Thomson Hall in the city’s Entertainment District is the home of both the Toronto Symphony Orchestra and the Toronto Mendelssohn Choir. Built almost a hundred years after Massey Hall, Roy Thomson Hall opened in 1982 and has a capacity of 2,630 guests. It is characterized by a circular architectural design that features a sloped and curvilinear glass exterior. 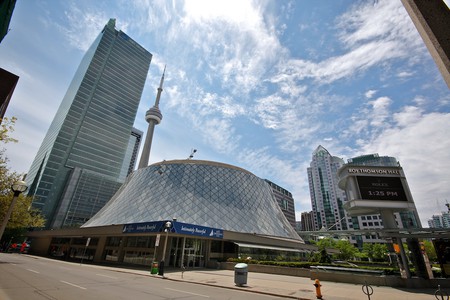 The Ontario Legislature maintains some of the most prominent landmarks in the city, especially the main Ontario Legislative Building at the center of Queen’s Park. Since Toronto is the provincial capital of Ontario, the striking five-story building houses the suite of the Lieutenant Governor of Ontario, the Legislative Assembly of Ontario, and the offices of members of the provincial parliament. Designed in the Romanesque style by Richard A. Waite, the building resembles a pink palace and was constructed with 10.5 million Ontario sandstone bricks that were made by prisoners of the Toronto Central Prison. The Ontario Legislative Building opened in 1893 after six years under construction. 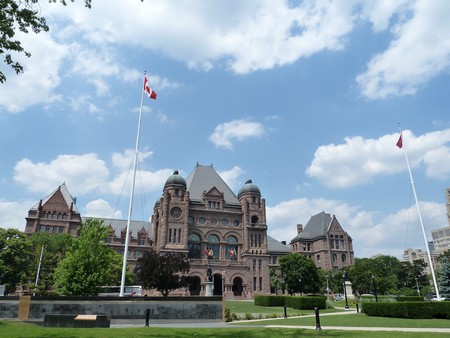 Across the street from the Ontario Legislative Building is Whitney Block, another important edifice connected to the provincial government. The modern Gothic-Art Deco main building was constructed in 1926 under the direction of architect F.R. Heakes, and the tower was completed in 1932. At that time, it was one of the tallest buildings in the city. The limestone façade of Whitney Block is decorated with a series of quatrefoils, along with figures that symbolize abstract ideals such as justice, as well as the more common working pursuits of agriculture and mining. Whitney Block is connected to the main Legislative Building by an underground tunnel. 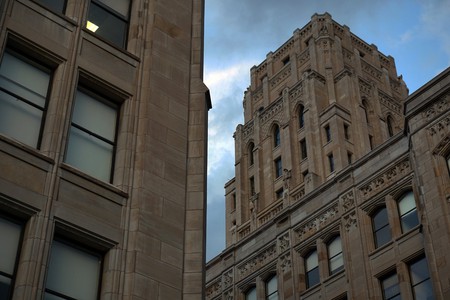 Located at Queen and University and surrounded by a distinctive iron fence, Osgoode Hall was constructed between 1829 and 1832 and housed the first professional law school in the province of Ontario. The building represents a mix of late Georgian Palladian and Neoclassical architectural styles, and it is currently home to the Ontario Court of Appeal, the Divisional Court of the Superior Court of Justice, the offices of The Law Society of Upper Canada, and the Great Law Library. 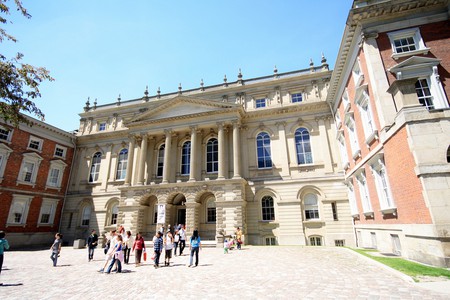 Formerly called the Don Valley Brickworks, the Evergreen Brickworks were formerly a quarry and industrial area in operation for nearly a century. The quarry produced the bricks that constructed such architectural landmarks as Massey Hall, the Ontario Legislature, Osgoode Hall, and even Casa Loma. Since the original factory was closed, the area has been converted to an urban park and community and cultural center. The factory buildings have been restored and converted into some of the “greenest” buildings in the city, while maintaining the historical integrity of the original structures. The Brickworks are a landmark of architectural restoration and natural beauty that you won’t want to miss exploring. 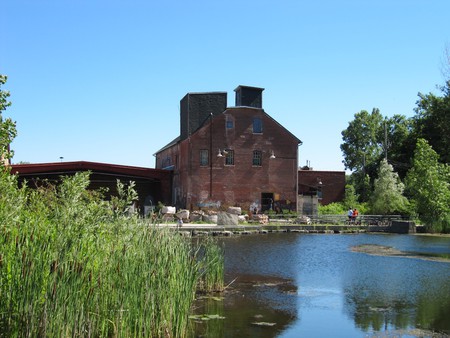 The historic Distillery District is located east of Toronto’s downtown area, containing more than forty heritage buildings that comprise the largest collection of Victorian-era structures in North America. One of the main highlights is the Gooderham and Worts Distillery, built in 1832, which was once one of the largest distilleries in the world. Other distinctive and well-preserved brick buildings date back to the nineteenth century, including the impressive Malt House, built in 1860, and the Stone Distillery, built in 1859. After the factories went out of business in the late twentieth century, they were abandoned until the city’s revitalization project turned the area into the fashionable and artistic community that it is today. 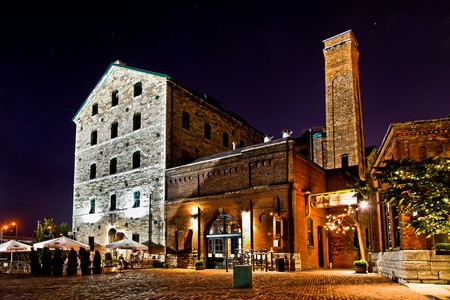 If you’re interested in exploring more of the city’s architectural landmarks, check out our guide to some of Toronto’s most impressive buildings.