A Pro Sports Tour of Toronto 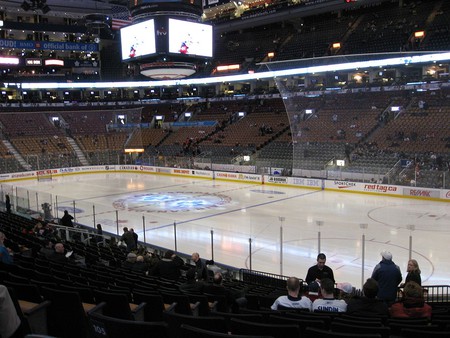 Toronto is seen as a hotbed of professional sports culture in Canada because in many cases, including basketball and baseball, Toronto is home to the only pro team in the country, making the spectator atmosphere in the city particularly intense. Whatever the season, there’s bound to be a home game of some sort coming up fast, and heading to the rink, arena, or stadium is a popular pastime – whatever your athletic preferences may be.

The Leafs were one of the “Original Six” teams of the National Hockey League (NHL), founded in 1917. They are part of the Atlantic Division in the Eastern Conference of the NHL. The historic Maple Leaf Gardens was the home of the Leafs from 1931 to 1999; today, the team calls the Air Canada Centre home.

The Maple Leafs have won 13 Stanley Cup championships, making them second only to the 24 championships of their main rivals: the Montreal Canadiens. Despite the fact that the Leafs won their last championship in 1967, which makes their 48-season gap between championships the longest in the NHL, Torontonians remain very loyal to their team.

The Leafs salute the crowd. #TMLTalk

The founding of the Toronto Raptors marked the National Basketball Association’s first venture beyond the USA border. Currently, they remain the only Canadian-based team in the NBA, competing in the Eastern Conference Atlantic Division.

The Raptors initially played home games at the SkyDome (renamed the Rogers Centre in 2005), before moving to the Air Canada Centre in 1999. The team struggled during its early years, but the past two seasons (2013–14 and 2015–16) have seen the team make record-breaking franchise wins: in the 2015–16 season, for example, they won 56 games, finishing in second place in the conference for the first time in franchise history. The excitement surrounding the Raptors has been steadily heating up, with support from local celebrity Drake and the infamous “We The North” campaign.

The Toronto Blue Jays compete in Major League Baseball (MLB) as a member club of the American League (AL) East Division. Founded in 1977, the team plays its home games at the Rogers Centre in downtown Toronto. Like the Raptors, the Jays are currently the only Canadian-based team in the MLB.

After initial struggles, the team had its first winning season in 1983, and in 1985, they became the division champions. From 1985–1993, they won five division championships in nine seasons, including three years in a row from 1991–93. During this time, the team also became back-to-back World Series champions in 1992 and 1993.

After 1993, the Blue Jays didn’t qualify for the playoffs for 21 consecutive seasons, until finally having more successful seasons in both 2015 and 2016.

Think it means something to them? #OurMoment

The Toronto Football Club, founded in 2007, plays in Major League Soccer (MLS) as a member of the Eastern Conference.

Playing its home games at the BMO Field near Exhibition Place, the Toronto FC are five-time winners of the Canadian Championship, in addition to being 2011–12 CONCACAF Champions League semi-finalists and the 2016 MLS Cup Playoffs Eastern Conference champions.

Back at it. #TFCLive

Toronto Rock is Toronto’s national lacrosse team, competing as members of the Eastern Division of the National Lacrosse League (NLL) since 1998. Now playing home games at the Air Canada Centre, the team was founded as the Ontario Raiders in Hamilton, Ontario, playing at the local Copps Coliseum before being sold and relocated to Toronto. They were then renamed and played at Maple Leaf Gardens for the 1999 season. The Toronto Rock won their 6th league championship in 2011. They hold a tie for the most championships in league history, along with the Philadelphia Wings.

Congrats to former Rock players Russ Heard and Dan Stroup on their recent induction into the Canadian Lacrosse Hall of Fame. #CLAHOF

The Toronto Argonauts compete in the East Division of the Canadian Football League (CFL). Founded in 1873, the Argos played their home games at the Rogers Centre from 1989 to 2016, and they have just recently located to the BMO Field. The Argonauts have won the Grey Cup a record 16 times and have appeared in the finals 22 times.

This city is a world of its own – let's show the world what were made of. #GreyCup is one week away! #CFL #Toronto #GCPlayoffs #thesix #views

The most recent addition to Toronto’s pro sports experience, the Toronto Wolfpack will begin to play in the 2017 League 1 season. Not only are they the first professional rugby league team in Canada, but they will also be the first Canadian team to play in the Rugby Football League, and the world’s first trans-Atlantic professional sports team. Their home stadium will be Lamport Stadium, which will be dubbed “The Den” for games.

While their first official league match won’t take place until March 4, 2017, on January 22, 2017, the Wolfpack played their first professional game in a pre-season friendly match against Hull F.C. at the KCOM Stadium in England. The final score was 26-20, in favor of Hull – but there’s still plenty of time for this new team to pick up momentum! Indeed, on February 25, 2017, they had their first victory, 14-6 in a competitive match toward the Challenge Cup.

Watch the full coverage of our historic first ever match with @hullfcofficial now!! Link in Bio!👉. 🐺🤘🔲🔳💥 #RUNWITHTHEPACK

A post shared by Toronto Wolfpack (@torontowolfpackofficial) on Jan 23, 2017 at 8:01pm PST