A History Of The Old Woodbine Raceway In 1 Minute

Greenwood Raceway, originally known as the Woodbine Racetrack, is a horse racing facility with an storied history in Toronto. Built by the Ontario Jockey Club (OJC), which later changed its name to the Woodbine Entertainment Group (2001), this racetrack was the organization’s first racetrack to stage both thoroughbred and standardbred horses at the same facility in North America.

Greenwood Raceway was built in 1874 as the Woodbine Race Course along the shores of Lake Ontario in eastern Toronto. It was originally owned and operated by two men, Pardee and Howell, who then passed the raceway on to Joseph Duggan, the original owner of the land, after experiencing financial problems. Duggan went on to form the OJC in 1881, an organization that would be the catalyst in putting Toronto on the horse racing map. The ‘Old Woodbine’ (a nickname it received after the construction of the new facility in 1956) held the Queen’s Plate (Canada’s oldest thoroughbred horse race, founded in 1860) on July 1, 1881. 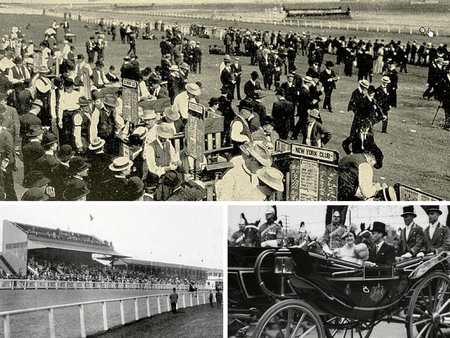 In 1939, King George VI became the first reigning monarch to witness the running of the King’s Plate. In 1947, the OJC, led by Edward Plunket Taylor, George C. Hendrie and J.E. Frowde Seagram, developed a bold plan to put Toronto on the same level as other racetracks in North America, and by 1955, E.P. Taylor had acquired the local tracks, Hamilton, Thorncliffe, Long Branch, Dufferin and Stamford, which became consolidated into Fort Erie, Old Woodbine and the soon-to-be-built New Woodbine. By 1956, a more extravagant track was built in former Etobicoke, named the ‘New Woodbine’, paying homage to its older sister track, with 780 acres of land, a turf course, infield ponds, scenic waterfalls, and a modern facility. In 1963, the Old Woodbine was renovated and renamed the Greenwood Raceway, which hosted both standardbred and thoroughbred racing up until its closing in 1993. In 1984, Greenwood hosted the inaugural North America Cup and also played host to the Canadian Pacing Derby, the Fan Hanover Stakes, the Maple Leaf Trot and the Canadian Trotting Classic.

By 1994, all operations were moved to the New Woodbine track and the stadium was demolished, replaced by residential and commercial buildings, with half of the property turned into a park, otherwise known as Woodbine Park. In memory of the track, streets nearby were named after famous thoroughbred horses: Northern Dancer and Winners Circle.

On December 19, 1997, the OJC opened its new 42,000 sq. ft. off-track wagering facility at Greenwood, which now operates as the Greenwood Teletheatre, where patrons can place bets off-site.