A History Of The Canada Life Building In 1 Minute 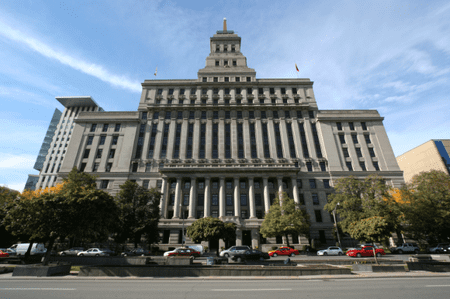 If you’re a Toronto local, you’re accustomed with the famous weather beacon that sits on the historic Canada Life Building for scoping out the weather report (if you know the signals, like a true local should). Sitting at Queen and University in the heart of Toronto‘s financial district, the weather beacon was constructed to give light to the next day’s weather — forecasting anything from ice and snow storms to lightening and rain through a series of coloured signals.

After the Depression — in the wake of financial uncertainty — the city abandoned most of its plans for expansion in Toronto, except for one: the Canada Life Building, which started construction in 1929. Opening in 1931, it was one of the tallest buildings in the city, playing host to the country’s oldest life insurance company. Designed by Sproatt and Rolph in Beaux Arts style, the building boasts a limestone exterior with granite columns, marble floors and walls, a gold leaf ceiling and an observation deck. The weather beacon, costing a mere $25,000, was added 20 years later and turned on for its first time in August 1951. 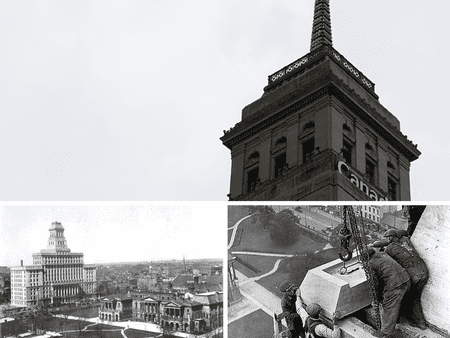 Today, the weather beacon is the oldest device of its kind in Canada with 1,500 lightbulbs and 9,000 feet of wiring. The lights, representing different color codes, summarize forecasts from clear, cloudy, rain and snow to temperature rises and decreases. It will even tell you if the temperature will remain unchanged. The information is updated four times a day by the Weather Center at Pearson Airport; in 1951, the weather predictions were said to be ‘80% correct’, which were programed by hand using switches in the control room.

At first, the lights were only turned on from dusk until 2:00 a.m (the lights weren’t bright enough to be seen during the day), except during winter when the lights were turned on in the early — and, dark — mornings. Although there were improvements in lighting technology since its construction, Canada Life began to minimize their energy use a few years ago by turning off the beacon at midnight; recently, the bulbs were replaced with energy-efficient LEDs, making the beacon available for more constant use despite its outdated nature as a method for weather reporting.

📅 Canada Life Building: By appointment only