A History Of St. Michaels Catholic Cathedral Building In 1 Minute 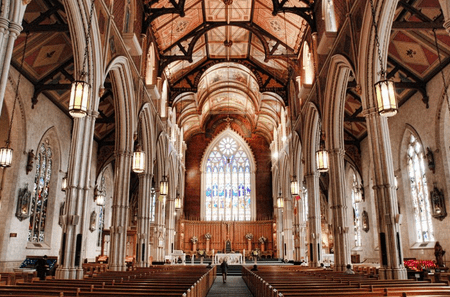 St. Michael’s Cathedral, the oldest church in Toronto, is known as the principal place of worship for the largest English-speaking parish in Canada. After the Dioscese of Kingston, a branch of the Roman Catholic Church, was established in the City of Toronto in 1826, the number of Catholics began to grow rapidly rising to 25,000 members by 1842, many of which came with the influx of Irish immigrants from the Great Famine (1845-1852). With Father Michael Power as the first bishop and head of St. Paul’s Church – Toronto’s first Roman Catholic church (1822) – and a rising Catholic population, Power decided that a larger church was needed.

In 1845, Bishop Power bought land from Captain John McGill for the new Cathedral, even using some of his own funds to make the purchase. William Thomas, a popular Toronto architect at that time, was in charge of the plans for the new church, inspired by 14th century English Gothic style, with John Harper as the contractor and labour contributed by the community. Excavation for the new church began on April 7, 1845 on a plot of land known as McGill Square in a northern part of the city. The next day, the church held a dedication ceremony to St. Michael, laying the cornerstone of the building with donated fragments of a stone pillar and pieces of the roof of an old Cathedral in England, Norman York Minster Cathedral. During the construction of the Cathedral, a Bishop’s Palace was built alongside the Cathedral with the Episcopal Residence, Chancery Office and Cathedral Rectory, which was completed in 1846. 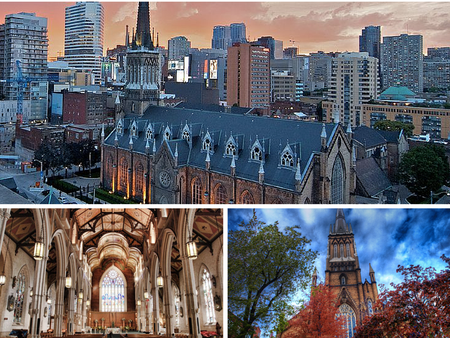 On September 29, 1848, St. Michael’s Cathedral was consecrated by the Bishop of Montreal; however, it remained vacant despite the rapidly growing Catholic population. In 1852, St. Michael’s College began conducting classes in the building until it was relocated in 1856. With the death of the first bishop, many other bishops followed, adding different additions to the Cathedral along the way: Bishop de Charbonnel added a decorated vaulted roof which remained until 1937, imported Stations of the Cross, additional chapels, and stain glass windows over the altar (1856) – which were made by well-known French artist Etienne Thévenot; Bishop Lynch constructed the tower and steeple (consecrated in 1866), sacristy, a fence, a second tower (1873), and a new organ (1880); Archbishop Walsh added more stained glass windows, clerestory windows (1890), and St. John’s Chapel (1891), which was used for everyday Mass processions during the winter (it was too difficult to heat the larger Cathedral). In the 20th century, significant changes were made to the interior including major renovations to St. John’s Chapel prior to the Pope’s visit in 1984.