A History Of Osgoode Hall In 1 Minute 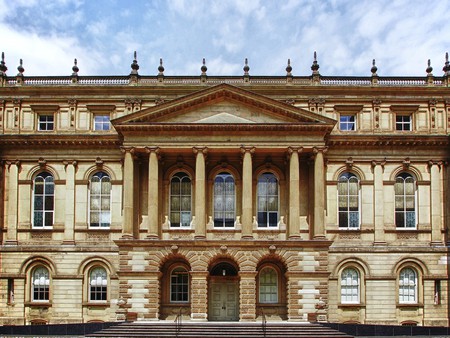 Osgoode Hall is a historic building nestled in the heart of downtown Toronto, featuring late Palladian style and Victorian architecture with an iron fence and gates. Constructed in the early 1800s, this building has housed legal operations in Ontario for almost 170 years — and still operates to this day. The Hall is home to the Ontario Court of Appeal, the Divisional Court of the Superior Court of Justice and the offices of The Law Society of Upper Canada. Named after Ontario’s first chief Justice, William Osgoode, this building is a National Historic Site of Canada (1979) and is designated under the Ontario Heritage Act (1990) as a means to keep the building preserved and intact.

The Law Society of Upper Canada was created in 1797 in Niagara-on-the-Lake as means for gathering and regulating the lawyers and paralegals of the province. The second meeting was held again that year, but this time in Toronto. In 1820, the Society decided to put 500 British pounds towards building a united meeting place for legal operations: Osgoode Hall. Although the original plan was to build upon land already owned at Church and King, the search for a different site continued. Debates ensued (from 1827 to 1829) between those held responsible for finding a suitable location for the building, many agreeing that it would be best to construct Osgoode Hall on the site of the old Parliament buildings at the bottom of Berkely Street. Dr. William Warren Baldwin, the Treasurer of the Law Society, stepped in and suggested that the Society purchase a six-acre piece of land from the Attorney General, Sir John Beverley Robinson, located at today’s Queen and University.

In 1828, the Society purchased the land from Sir Robinson for 1000 British pounds, and construction began on Osgoode Hall in 1829. During this time, Osgoode Hall was considered to be outside the city with only one dirt road connecting it to the core of the city, at King and Jarvis. 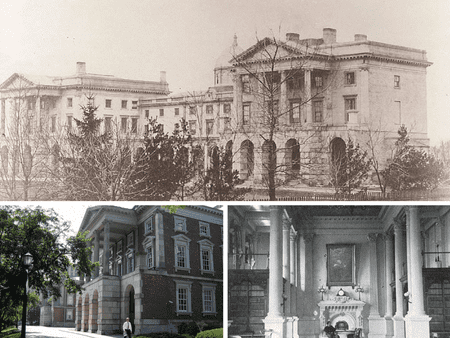 From 1838 to 1843, the Hall was held by the military and used as barracks for troops, until 1844 when the Law Society regained possession. Henry Bowyer Lane designed an expansion to the Hall, which included the west wing and the judge’s library. In 1855, the building was renovated and expanded to accommodate the courts, turning the original 1829 structure into part of the east wing, and again in 1880 to accommodate the Osgoode Hall Law School, which operated here until 1969, when it was relocated to York University.

From 1857 to 1860, the Great Library was added, designed by Cumberland and Storm — an extravagant sight to see with an ornate ceiling, cork floors and etched glass windows. In 1895, the American Room (designed by Burke and Horwood) was added, distinguished by its marvelous spiral staircase. In 1928, a War Memorial, sculpted by Frances Norma Loring, was added to the Great Library to commemorate Ontario lawyers and law students killed while fighting in WWI. Today, you can still see these historic rooms, and can even access the Toronto Courthouse through a connecting tunnel.