A History of Toronto’s Exhibition Place in One Minute 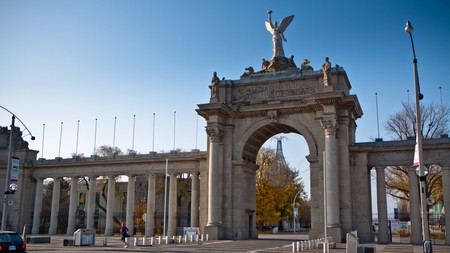 Once a hub for trade activity, Exhibition Place is now a venue that plays host to a long list of Toronto’s most sought-after events and trade shows in the city. From 1879 to 2009, Exhibition Place saw numerous buildings built, burnt and renovated, as a space that went through many renovations to finally become one of the largest exhibition spaces in North America.

Exhibition Place, formerly Fort Rouille, was first built by the French in 1750 as a trading post to trade furs with the natives. Fur trade was successful here, however the French destroyed the Fort in 1759 after other posts fell to the invading British forces – remnants of the walls of the fort can still be seen today.

When York was established in the 1790s, parts of this land (the east end) was reserved for military purposes, setting up a new fort, which was eventually named the Stanley Barracks in 1893. In 1846, the government of Upper Canada decided that every year an agricultural and industrial exhibition would be held in the province of Ontario, with the location changing annually.

Toronto hosted for the first time in 1858 in what is known today as Liberty Village until it had outgrown the site in the 1870s. In April 1878, the City of Toronto purchased a piece of land and moved its exhibition building (known as the Palace of Industry) to this area, holding the 1878 fair here. The next year, the fair was set to be held in Ottawa, so the City of Toronto decided to host its own fair, the Toronto Industrial Exhibition (which would later be renamed). The first exhibition was held at Crystal Palace, however this building was lost to a fire in 1906.

Between 1905 and 1912, the City of Toronto decided to expand Exhibition Place and appointed architect George W. Gouinlock as the head of the project to redesign the west end (the east end was still reserved for military purposes). This renovation and construction were meant to provide more venue space as well as make the area fit for national exhibitions. He designed and constructed 15 buildings, including the Press Building (1905), the Horticulture Building (1907), the Music Building (1907), the Government Building, the Arts, Crafts & Hobbies Building (1912; now home to Medieval Times), and the Fire Hall and Police Station (1912) all of which are still standing today. In 1910, the Dufferin Gates were replaced with more extravagant arches, and in 1912, the Toronto Industrial Exhibition was renamed the Canadian National Exhibition, or CNE for short.

During WWI, the Government Building was used as a barracks, and a camp was set up where the current Liberty Grand buildings stand. During this period, you would see the Dufferin Gates patrolled by soldiers. By the 1920s, the CNE had become so popular (and large – it was the world’s largest annual fair) that the city developed a 50-year-long plan for expansion, including new buildings, gates and courtyards, particularly in the east end of the exhibition. The new buildings constructed were the Ontario Government Building (1927), the Princes’ Gates (1927), and the Electrical and Engineering Building (1928), all designed and constructed by Alfred Chapman. The Coliseum became home to the Royal Agricultural Winter Fair, a popular and large event in Toronto, and in 1936 the Bandshell was added to host open-air concerts.

During World War II, Exhibition Place became primarily occupied by the military, and the CNE was cancelled between 1942 and 1946. In 1947, the CNE resumed as usual and Toronto’s economy boomed driving manufacturers and consumers to the CNE for purchasing and trading. New buildings were added, including the Food Building (1954), the Queen Elizabeth Building (1957), the Dufferin Gate (1959), the Better Living Centre (1962) and Exhibition Stadium (1975). During this period, the CNE began to be used year-round for trade and consumer shows like the International Trade Fair and the Boat Show. It also became home to other massive events hosted in Toronto like Caribana Festival and the Indy.

In 1974, Carling-O’Keefe Breweries presented the Carillon Tower to the CNE, a unique bell tower manufactured in the Netherlands, one of 11 in Canada. In 1988, the CNE was declared a historic site. Between the 1990s and the 2000s, Exhibition Place aimed to expand and add more buildings and space in an effort to improve Toronto’s waterfront. In 1997, the Enercare Centre, formerly the National Trade Centre, was renovated, becoming one of the largest convention and exhibition centers in all of Canada and the sixth largest in North America. In 2003, the Ricoh Coliseum was renovated from its original 80-year-old structure into a more modern space for hosting hockey games, trade shows, concerts and events. It’s also home to the International Boat show, which builds the largest indoor lake in North America each year. In 2009, the Allstream Centre (formerly the Automotive Building) was renovated, adding 160,000 square feet to Exhibition Place.