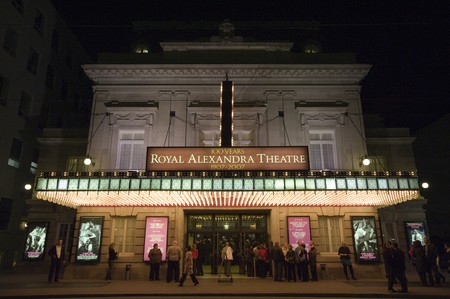 For most of its modern history, Toronto has been a leading hub for the arts, and the Royal Alexandra Theatre is a testament to that. The Royal Alex, located in downtown Toronto, was built in 1907 – and is the oldest continuously operating legitimate theatre in North America. For a brief history of the Royal Alex’s 100+ year history, including its impressive construction and its significance in Toronto’s Entertainment District, read on.

Construction began in 1905 and was completed in 1907 at a cost of $750,000. Designed in the Beaux-Arts style of architecture, the Royal Alex is a 1,497-seat proscenium-stage theatre, with two balcony levels, built in the style typical of 19th-century British theatres.

The theatre was designed by John McIntosh Lyle for a group of businessmen, led by ‘Toronto’s youngest millionaire,’ Cawthra Mulock, a 21-year-old foundry owner. Mulock and friends wanted to put their town on the cultural map and planned to do that by building ‘the finest theatre on the continent.’ Lyle, an associate with the New York architectural firm Carrère and Hastings (known as the official architects of the theatre), was born in Belfast, grew up in Hamilton, and studied at Yale University and Paris‘ École des Beaux-Arts.

He and Lyle created what has since been referred to as ‘an Edwardian jewel-box’ – imported marble, hand-carved cherry and walnut, fine velvets, crystal chandeliers, with no fine details spared. The Royal Alex is Toronto’s first steel-framed structure, which allowed for cantilevered balconies, so there are no large pillars obstructing lines of view. And since Toronto’s summers are as hot as its winters are cold, this was all built over a huge ice-pit – making it one of the first ‘air conditioned’ buildings in North America. 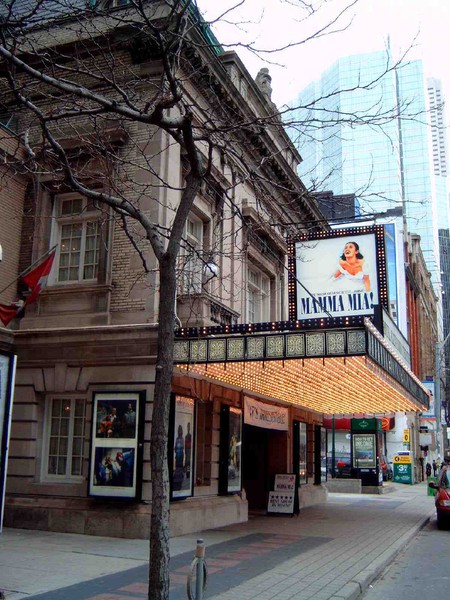 When the Royal Alex opened in 1907, it was located in an upscale, prestigious neighbourhood. Neighbours included the mansion of Ontario’s lieutenant-governor; Ontario’s legislative buildings; the upper-class St. Andrew’s Presbyterian Church; and the Princess Theatre, which was built on what had previously been the athletic field of the exclusive boys’ school, Upper Canada College near King and Simcoe Streets. This area was dubbed ‘the crossroads of Education, Legislation, Salvation, and Damnation,’ for its school (education), parliament buildings (legislation), church (salvation), and a tavern popular with Princess Theatre actors (damnation).

The Royal Alexandra Theatre, often referred to as the ‘Royal Alex,’ ‘The Alex,’ or ‘the R.A.T.,’ is named after Queen Alexandra, Danish Princess, wife of King Edward VII, and great-grandmother to Elizabeth II, Canada’s reigning Queen. Edward VII sent the theatre letters patent, entitling the theatre to royal designation. It’s believed the Royal Alex is the last remaining ‘royal theatre’ in North America, at least in the legal sense. 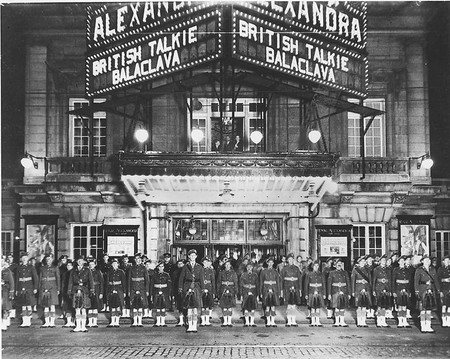 Soldiers at Royal Alexandra Theatre, Toronto, showing the British film Balaclava (1928) after it was reissued as a talkie | Public Domain/William James/WikiCommons

Since 1963, the Royal Alex has been owned by Ed Mirvish Enterprises, established by Toronto department store owner, Edwin Mirvish, who has left his legacy on the city in a myriad of ways. Throughout the 1950s, the theatre began to fall into disrepair, along with the rest of the once prestigious neighbourhood. ‘Honest Ed’ Mirvish restored the Edwardian marvel at the cost $500,000, which meant the theatre had to close for its longest run in its history. However, the investments in such buildings at this time led to the growth of the Entertainment District as Toronto knows it today. Since 1986, the theatre has been managed and operated by Mirvish Productions, a theatre production company led by Ed’s son, David Mirvish. 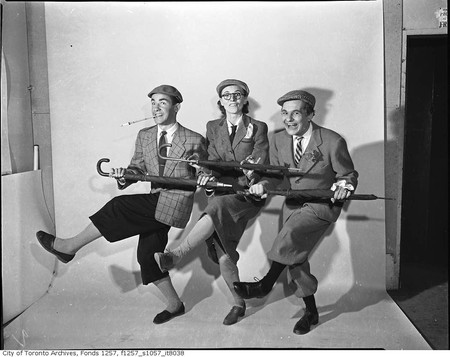 The Royal Alexandra was named a National Historic Monument in 1987, on its 80th birthday. Because of its historical designation, it has no elevators or escalators. Wheelchair seating is available in the orchestra only.

To keep its reputation as a Toronto legacy alive and well, The Royal Alex is currently closed for renovations. Changes will include reducing the 1,497 seats to 1,244 for added leg room and brand new seats, identical to the original 1907 ones – including the RA insignia and wire hat-racks near the seats. The theatre is due to re-open on November 15, 2016. 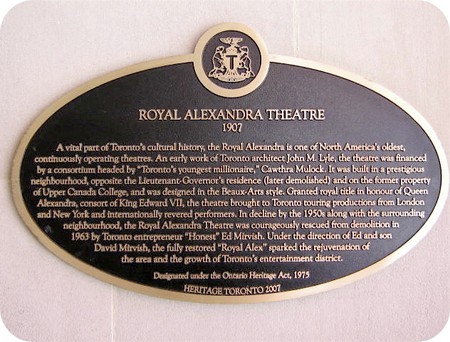