Bringing the moves | © KatieThebeau/Flickr
The Caribana Festival, known to the locals as Toronto’s celebration of Caribbean culture and traditions, is one of the largest cultural festivals in North America, bringing in over two million people each year. What once started as a three-day festival under the name Canadian Centennial is now a massive party that lasts three weeks in the summer. Read on to discover how this 1960’s festival became the giant celebration that it is today.

The Toronto Caribana Festival began in 1967 as one of the first Caribbean festivals held outside of the tropical area. The celebration, called the Canadian Centennial at the time, was meant to share West Indian and Black Canadian culture and traditions with the community and to help fund the building of a West Indian cultural centre. Molding the festival after the Trinidad and Tobago Festival, ‘Caribana ’67 Week‘ was announced on July 2nd by the newly created Caribbean Centennial Committee, developed as a means for organizing the details of the newly implemented celebration. The festival was set to take place August 5-12, 1967 at Olympic Island, Toronto Islands. 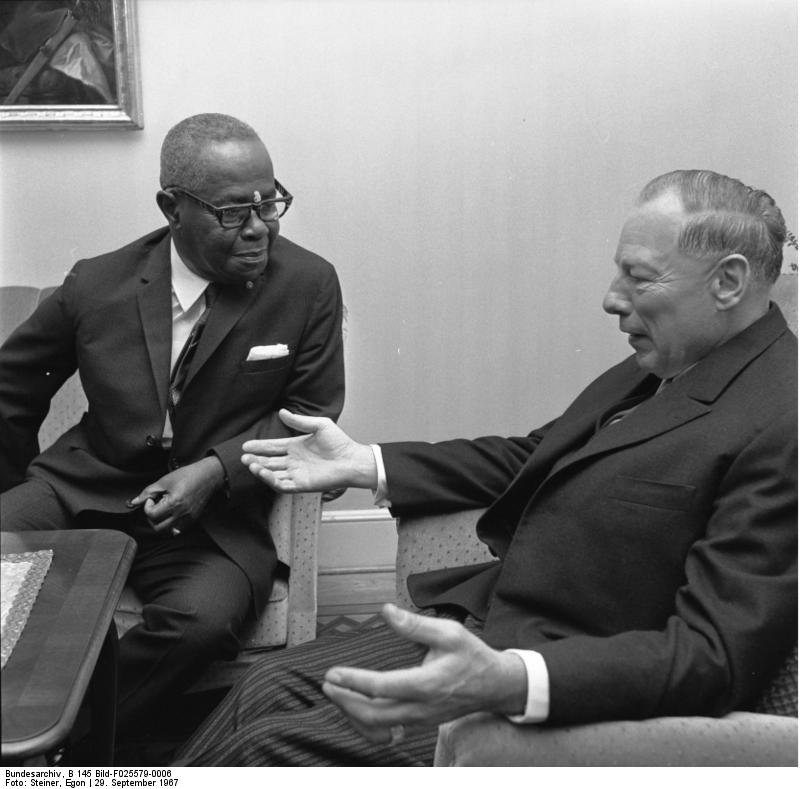 The carnival would represent the cultures of the ten main Caribbean islands in addition to Bermuda and Guyana, with performances by steel bands and a parade – much of the music associated with the event showcased the soca, steelpan and calypso. Other events would include dancing, films, stage acts, drama, kids’ and adults’ carnivals and nightclub events along with other things like ferry cruises, fashion shows, fruit and vegetable markets showcasing Caribbean produce and a waterskiing festival. 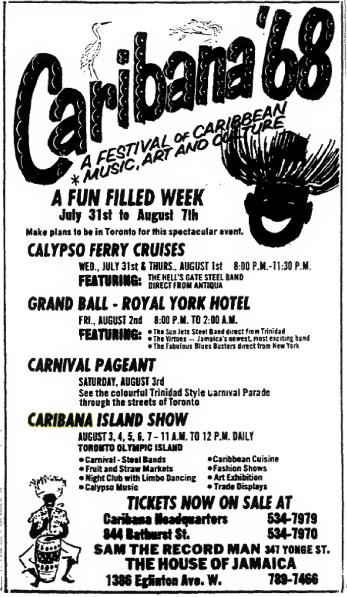 A 1968 advertisement for the Caribana festival | © Caribana ’68/Wikipedia

The first day of the festival kicked off with a ‘carnival-style’ parade – bright and lavish costumes, decorated floats and five calypso bands drumming on steel drums – which was an open parade that would allow anyone to join in the celebration. The concert held the next day showcased Trinidadian performers and was so popular that over 32,000 people attended, making it the one of the best events of the year; however, due to rain, the event was extended to the following Sunday when an additional 3,000 people attended. The success of the festival attracted Caribbean leaders as well as stage and musical acts who came to dance in the parade and garnered strong support from the city and citizens of all ethnicities, making this one-off celebration into an annual affair.

The event continued every year, gaining support and popularity, and bringing in tens of thousands of visitors each year. In 1971, a woman’s brakes failed, and she lost control of her vehicle, killing parade standbys and injuring many others. That year’s event lead to a boycott of the festival by the Black Students Union at the University of Toronto, advocating that the celebration was not representative of the struggle that they still face every day. In 2006, due to financial troubles, the festival parted ways with the City of Toronto – changing the festival name to Caribana Toronto and giving way to another Caribbean festival held by The City of Toronto under the name Scotiabank Toronto Caribbean Festival. The festival has continued to be held every year, making this year its 48th run. While Caribana is a three-week long celebration, the culmination of the festival is the final weekend, ending with the famous and ever-so-popular parade.

Held at various locations across Toronto. Check website for more details and schedule of events.