A Brief History of the Great Vancouver Fire

June 13 1886 is etched in Canadian history as the date of the Great Vancouver Fire, which razed the newly incorporated city to the ground in under 45 minutes and left as many as 28 residents dead and only three of an estimated 1,000 buildings unharmed.

The Origins of Vancouver

In 1885, Vancouver won the bid to become the terminus station of the first cross-country railway system, which played a significant role in developing the city. But its expansion was briefly halted when the Great Vancouver Fire of 1886 broke out. 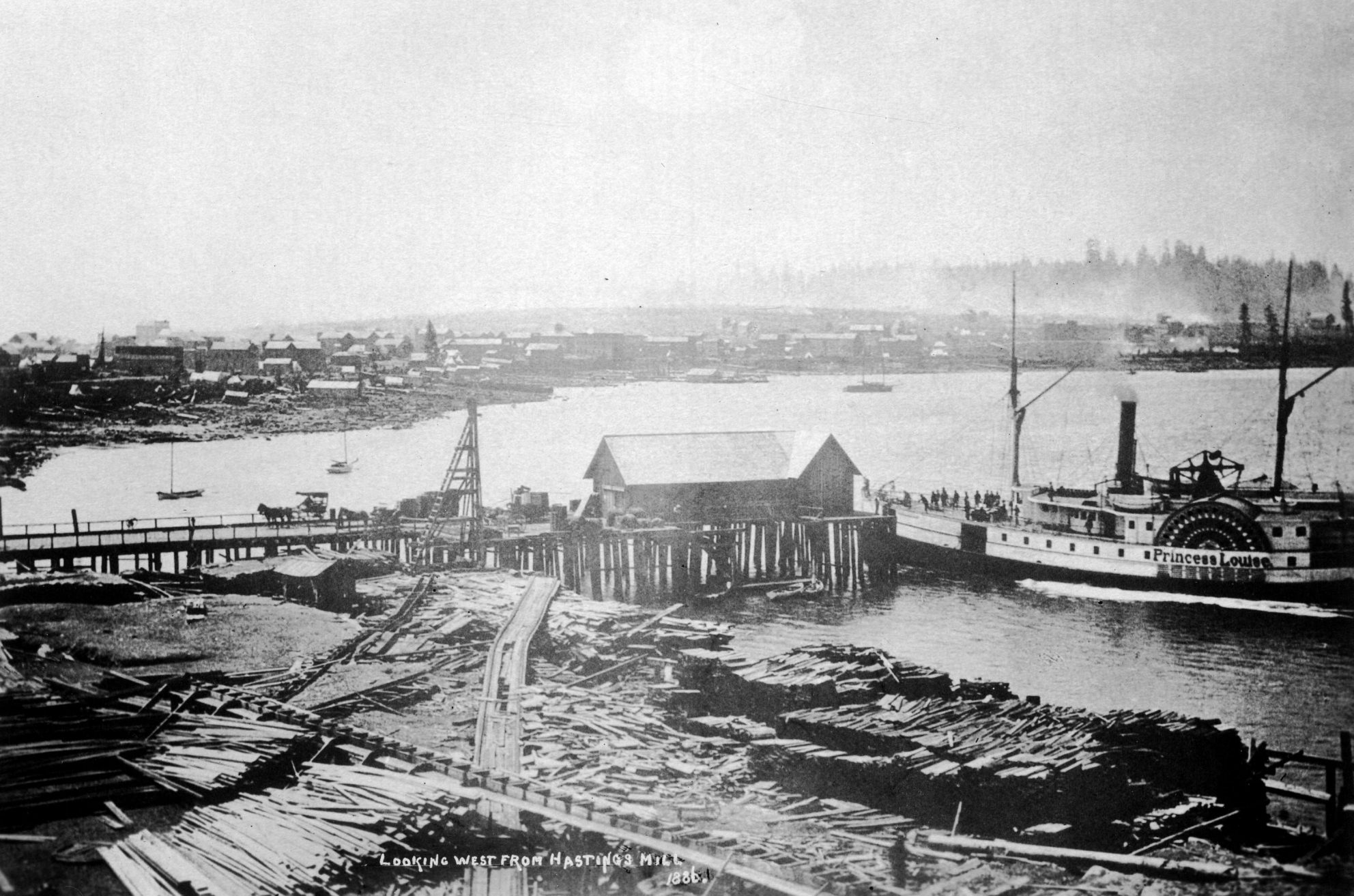 The Canadian Pacific Railway was granted an extensive 6,000 acres (2,428ha) of heavily forested land in present-day English Bay and Coal Harbour by the government the year before the Great Fire. Vancouver’s loggers and railroad workers diligently cleared the thick canopies of ancient cedar, hemlock and douglas fir, some of which stood over 330 feet (100m) tall, in anticipation of the impending railway construction. While suitable parts of the trees were brought to the mill for harvesting, unusable pieces of wood chips and branches produced during the process were left to accumulate in mounds that reached heights of a three-story building. These highly flammable slash piles were eventually burned and the ground flattened to create a clearing.

How the Great Vancouver Fire started

On June 13 1886, historians believe railroad workers were monitoring a clearing fire near Yaletown‘s roundhouse when a gusty gale from the west swept up the flames, which landed on the slash piles, sparking dozens of succeeding fires. Fueled by mounds of dry tinder and unaffected by the wet blankets and pails of water that the workers combatted the flames with, the fires spread rapidly. At the sight of an ominous smoke cloud, the bronze bell at St James’ Church was frantically rung by an onlooker. This quick act of heroism saved many, but the bell was eventually left in a state of molten alloy when the Great Fire engulfed the church. 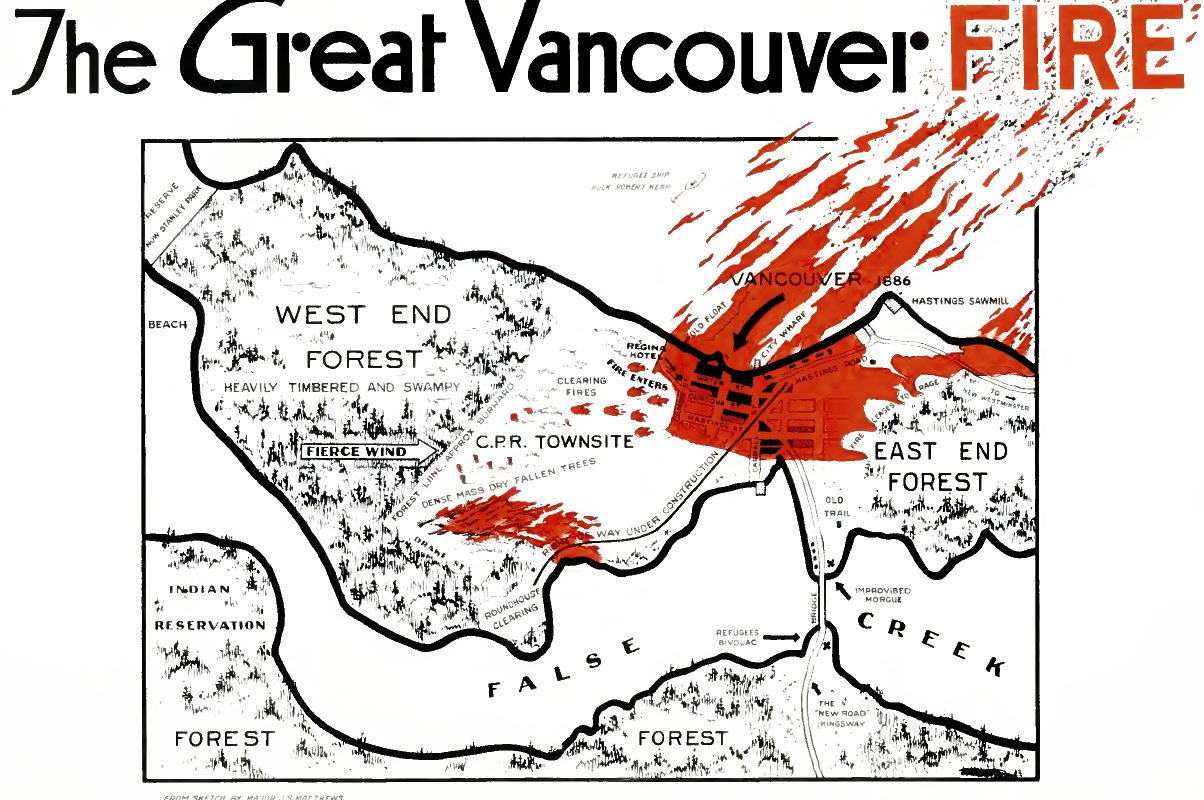 Chaos and the fire spreads

As the blazing fires continued down Water Street, Vancouver’s terrified residents hurriedly bundled their possessions and raced down the city’s meandering footpaths away from the flames, desperately banging on the doors of those who failed to acknowledge the commotion outside. With flames at their heels, many leaped into the waters of Burrard Inlet and found respite on the boats moored at the Hastings Mill Wharf. Others remained in the inlet with their heads barely above water, gasping for air until the communities of the Squamish Nation paddled dozens of canoes from what is today’s North Vancouver to rescue the victims. 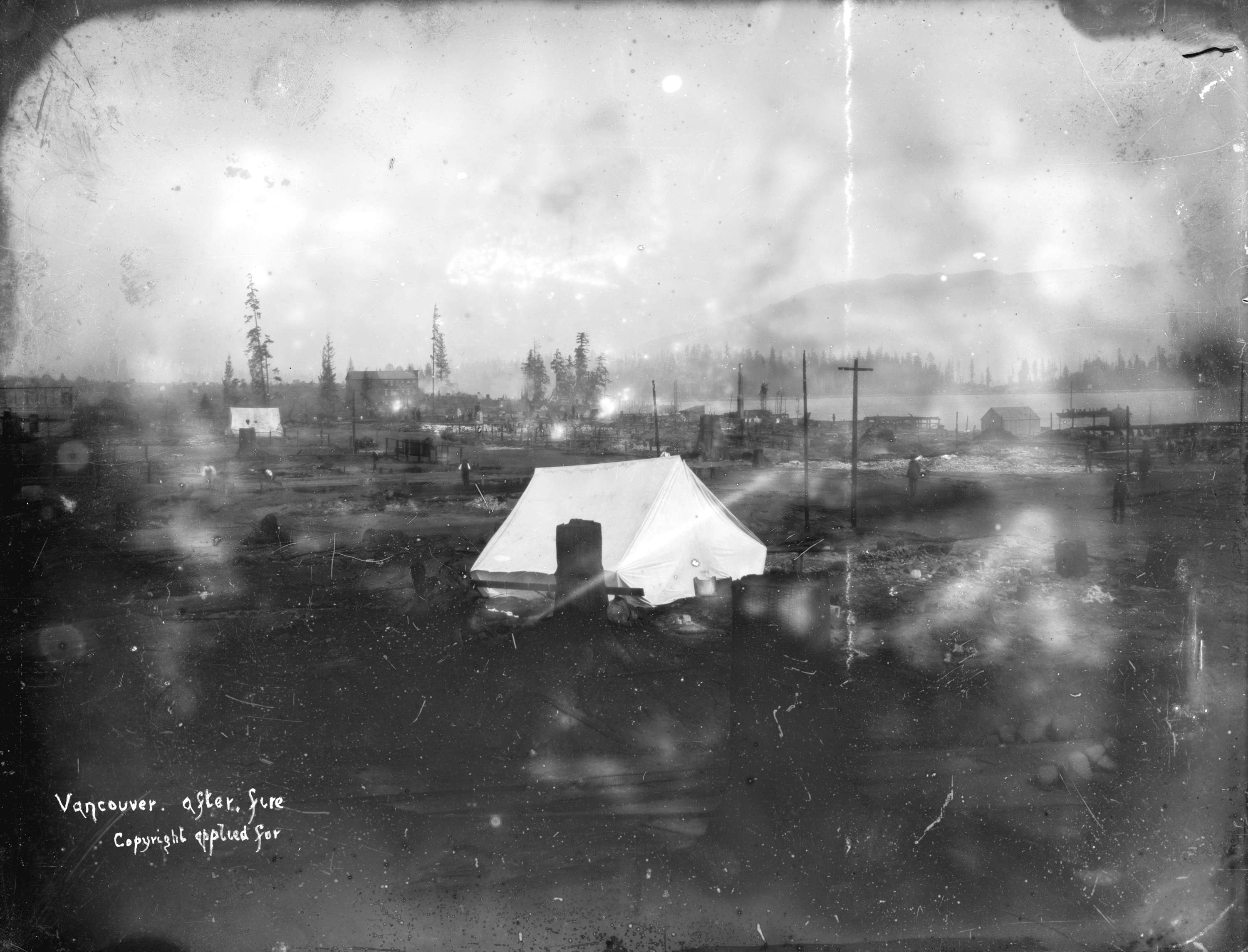 A photograph shows George R. Gordon’s tent among debris at Cordova Street and Carrall Street, and the Regina Hotel in the background, after the fire | City of Vancouver Archives

The aftermath of the Great Vancouver Fire

The Great Fire defeated all efforts of the fledgling Vancouver Fire Brigade. According to historians, the raging fire eventually consumed all but three of the estimated 1,000 wooden structures in Vancouver – newly opened businesses and wood-planked boardwalks were razed to the ground. Though city records cite as many as 28 deaths among Vancouver’s 3,000 residents, many victims were burned to an unidentifiable state, and the actual number of casualties remains unknown. 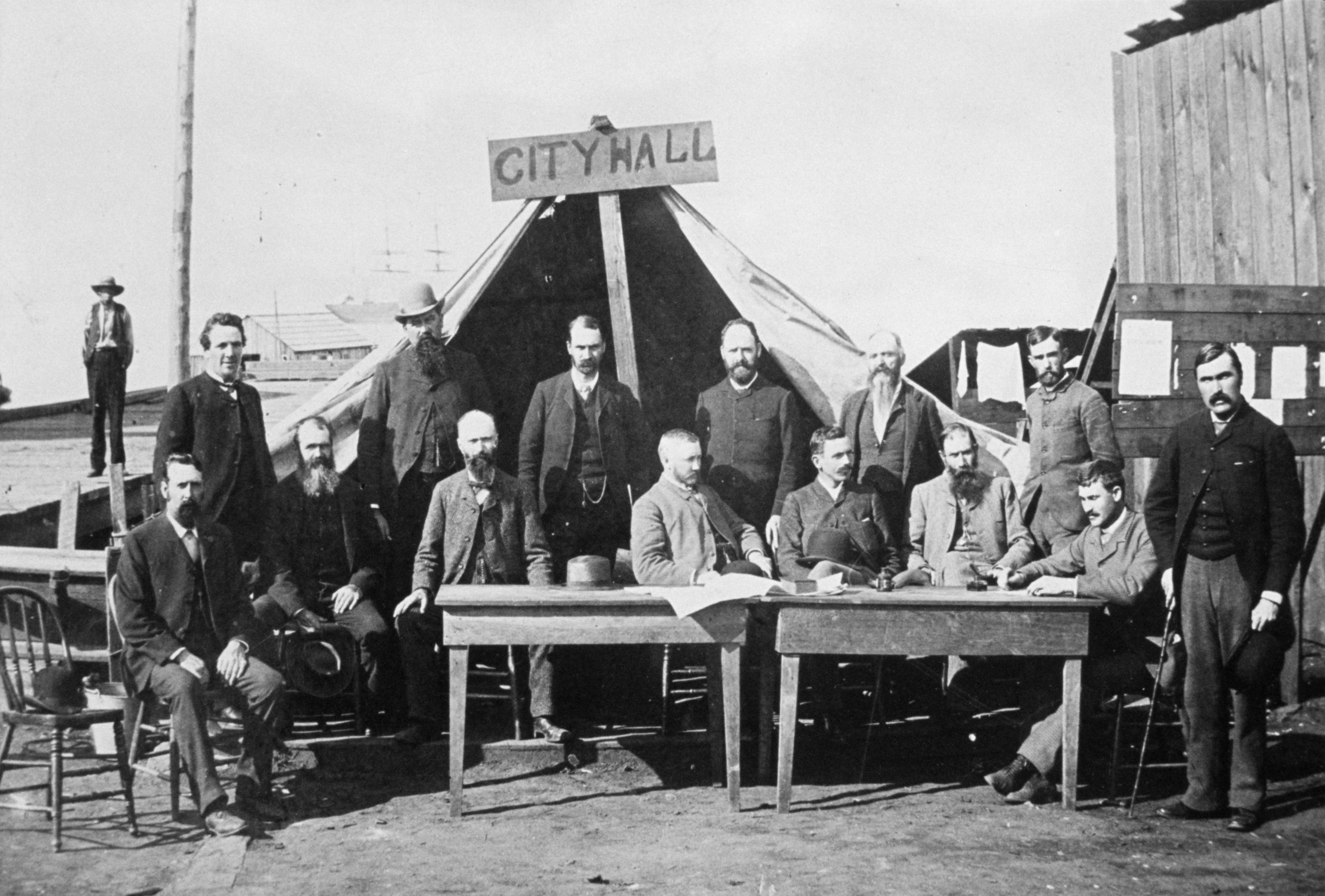 The promising city of Vancouver was demolished in a mere 45 minutes. The cost of damage done by the fire was assumed to be about $1.3 million, a staggering amount for the 19th century. However, rebuilding began in a matter of hours as residents assembled temporary tents as a refuge and the coastal communities of British Columbia united to establish a relief fund, raising thousands of dollars for the city in a few days, some of which went into purchasing the city’s first fire engine. 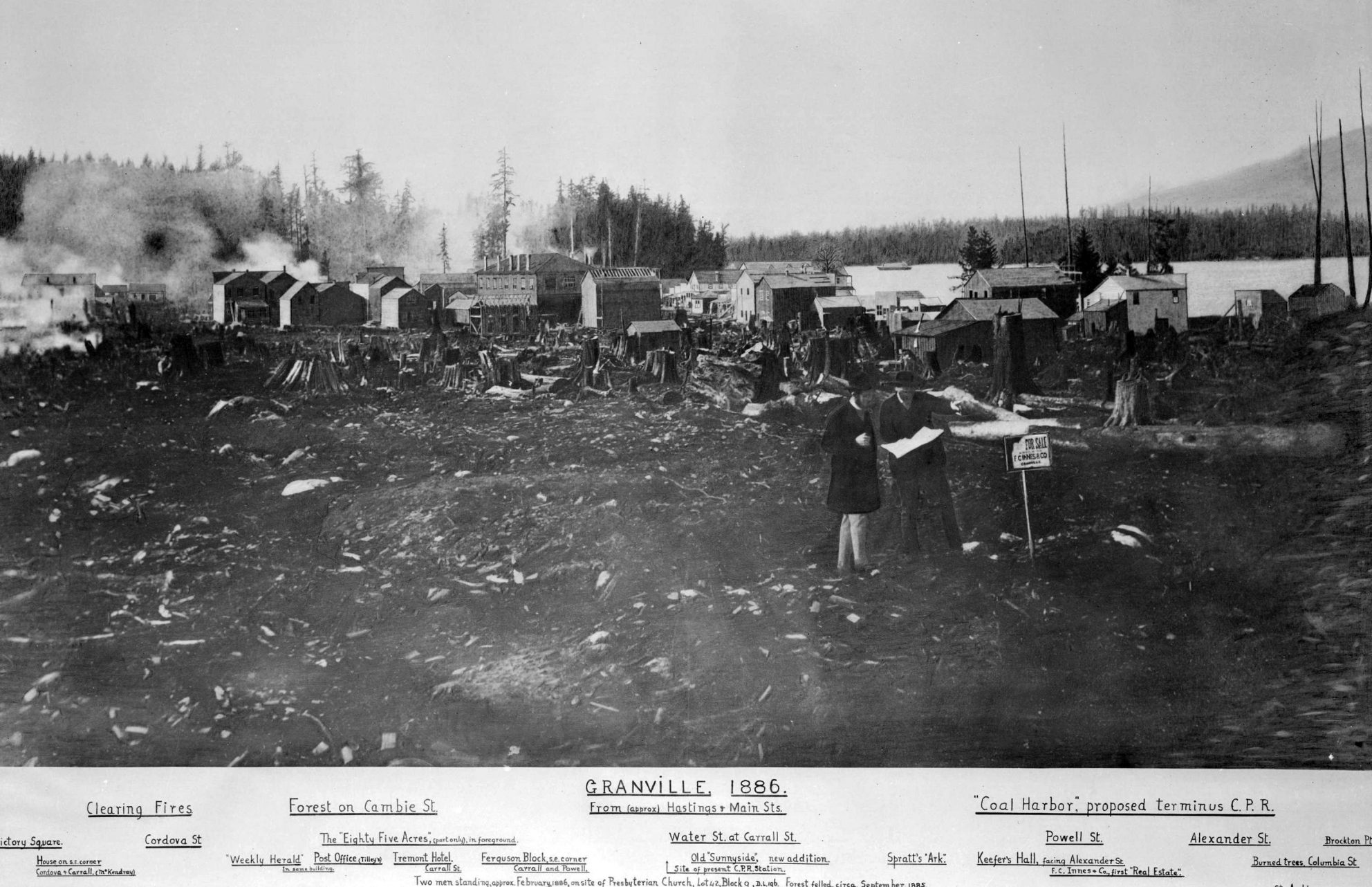 Vancouver also quickly adopted a bylaw stating that buildings must be made of brick or stone, which is still evident in many neighborhoods today. The remarkably prompt recovery from one of the most dramatic pages of Vancouver’s history helped install the city’s resilient and optimistic spirit.

History buffs who visit the city can still see the bronze bell of St. James’ Church at the Museum of Vancouver, which masterfully recounts the storied past of one of Canada’s premier destinations and gives even more context on the day that the city burst into flames, nearly derailing its future. 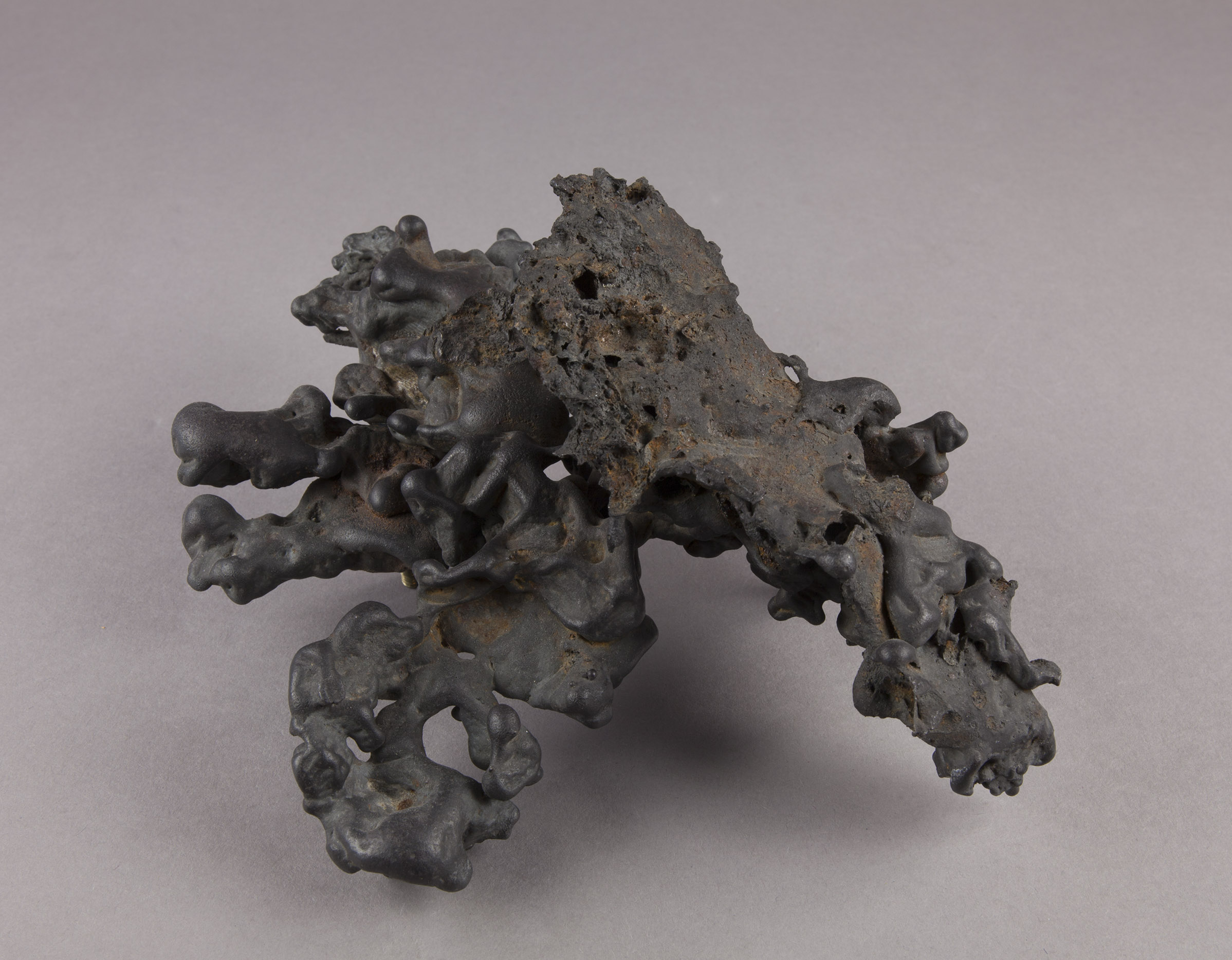 The remains of St James’ Church bell from the Great Vancouver Fire, 1886 | Museum of Vancouver Collection

This article is an updated version of a story created by Hayley Simpson.