A Brief History of Quebec’s Flag 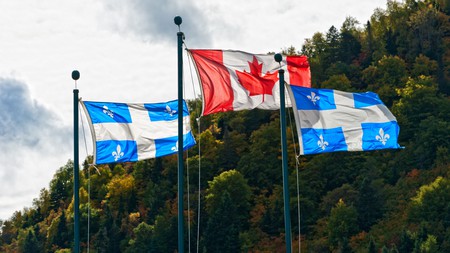 Known as the Fleurdelisé in French, the blue-and-white Quebec flag was officially adopted by the provincial government in 1948. Representing the province’s French roots, the history of the flag can be traced back to medieval Europe. Culture Trip explores the rich symbolism and history behind it.

The origin of the Fleurdelisé

Fleurs-de-lis were displayed in the region that is now modern-day France from as early as the 12th century. Traditionally, the backdrop of the French royal arms was blue, and up to the late-16th century many French flags combined blue and white in their scepters and coats-of-arms. Lis means “lily” in French, and in the Roman Catholic tradition that informed the worldview of early modern France, lilies were associated with the Virgin Mary. Sailing across the Atlantic Ocean, the French came to control vast areas of North America during the colonial era, with images of lilies engraved on the oversized crosses that Jacques Cartier erected in Gaspé Bay in 1534 and Stadacona (now Quebec City) in 1536, claiming the land for Francis I.

Historically, the white cross can be traced back to the Crusades. It represented France during the Hundred Years’ War, in opposition to England’s red version. In turn, the white cross against a blue background was adopted by the French Merchant Marine around 1535, while French explorer Samuel de Champlain claimed that it was still in use through the early 17th century.

Drawing again from Catholic symbolism, the colour blue is associated with the Virgin Mary’s traditional blue mantle, as well as the blue cloak of Saint Martin of Tours, who was the patron saint of the Kingdom of the Franks (modern-day France).

How the flag developed as a sign of French Canadian identity

The colony of New France was conquered by the British in 1763, and French banners were replaced by the British flag. But as the territory that would eventually become Canada continued to develop, French Canadian identity was in turn shaped by significant events such as the Lower Canada Rebellion of 1837 and 1838, alongside attempts to reinforce British colonial rule on the French population that continued into the 20th century. French Canadians maintained a distinct language and culture from their British counterparts, however, and wanted their own flag.

When a historical flag uncovered in Montreal in the mid-19th century, thought to have been flown by the victorious French Canadian troops at the Battle of Carillon (Ticonderoga) in 1758, a modified version of that design was adopted as an unofficial French Canadian flag. With a blue background, a gold fleur-de-lis in each corner, the Catholic symbol of the Sacred Heart of Jesus formed the focal point of the flag at the time.

Official adoption of the Fleurdelisé

Several versions of the fleur-de-lis flag existed well into the 1940s, until the official design was legislated and adopted in 1948 under the provincial government of Maurice Duplessis. The design was simplified, and the religious motifs were removed. While the symbolism behind the design elements is not officially acknowledged, it is understood that the flag reflects the province’s history and identity as a francophone nation in North America.