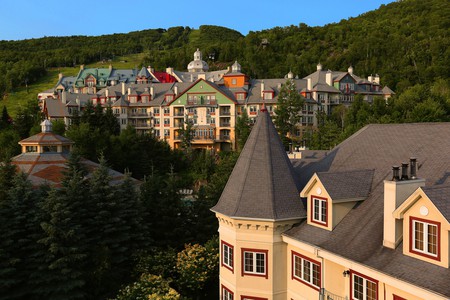 Mont-Tremblant is a world-renowned ski resort located near Montreal in Canada. Although it’s primarily known for being the top skiing mountain in Quebec, Mont-Tremblant is actually a year-round resort. Here’s a brief look at how this vacation destination became so popular.

In 1891, three parks were created around the Laurentian Mountains in Quebec. One of them was called Mont-Tremblant Recreational Park (renamed to National Park in 2001) and was located just 80 miles (130 kilometers) from Montreal. American explorer Joseph (Joe) Ryan, Tom Wheeler, and journalist Lowell Thomas came to the region in 1938 looking for gold. They all climbed to Mont-Tremblant’s summit and this was when Ryan was reputed to have said, “This has to be the most beautiful sight in the world. There is only one thing wrong. It is too difficult getting up here. I have to fix that”.

So Ryan bought land and on February 12, 1939, the first chairlift was installed. He then built the Mont-Tremblant Lodge, which still exists in the village today.

The name Mont-Tremblant comes from the local Algonquin population, and means “trembling mountain”. As a promotional ploy, Thomas broadcasted radio shows from Mont-Tremblant, and his marketing helped the area become a popular destination for skiers in the 1940s. When Ryan died suddenly in 1950, his wife ran the resort for 15 years, until she sold it to three Quebec entrepreneurs: André Charron, Jean-Louis Lévesque, and Roger Beauchemin. In the ’70s and ’80s more people began venturing north to the resort in both summer and winter.

In 1991, Mont-Tremblant was bought by Intrawest, which also owns other North American ski resorts, including Blue Mountain in Ontario, Stratton Mountain Resort in Vermont, and Winter Park Resort in Colorado. Once they took over, they immediately expanded Mont-Tremblant to resemble a European-style alpine village. The next big project was in 2009, when Casino Mont-Tremblant was built. It’s serviced by a gondola that runs from the main village.

Today, Mont-Tremblant spans 665 acres (269 hectares) and has 96 trails. The runs are split evenly, with 53 percent of slopes for beginners and intermediates, and 47 percent for the experts. Although the resort has gained a name as a skier’s playground, its location on Lake Tremblant makes it a great summertime destination, too. Activities in the warmer months include sailing, kayaking, and golf at two separate courses.