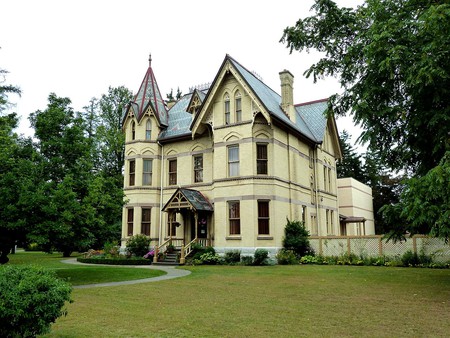 Canada has a few homes that act as surviving examples of the Aesthetic Art Movement, a style that originated in England and spread to North America in the late 19th century. One of the finest Canadian homes decorated in the spirit isn’t located in a metropolitan arts hub such as Toronto, Montreal or Vancouver; rather, it’s found in the relatively quiet town Tillsonburg, Ontario.

Among Tillsonburg’s quaint, bustling downtown, automotive plants and agricultural fields, you will find Annandale House. The Annandale National Historic Site is a living testament to a design movement that made its way across the Atlantic at the turn of the century; here’s how it came to be.

Annandale House was built in the 1880s by Edwin Delevan Tillson, the first mayor of Tillsonburg and son of the town’s founder, George Tillson. The home began as a retirement project for E.D. Tillson, aided by his wife, Mary Ann. Part of a 600-acre (243ha) model farm called Annandale, the latest technologies were used in the home’s construction, including steam heat and gaslighting, which would have been a relative novelty in the small town at the time. The house took seven years to complete and cost just over $30,000.

In the midst of Annandale’s construction in 1882, Mary Ann Tillson attended a talk delivered by Oscar Wilde in nearby Woodstock, Ontario. Wilde spoke on ‘The House Beautiful’, and Tillson applied much of what she heard to the decoration of her new home. With extravagant, hand-painted ceilings, intricately designed inlaid floors, ornate mantels, stained glass and more, Annandale is one of the few surviving Canadian examples of homes decorated in this style.

Annandale House is a living example of the Aesthetic Art Movement, the Victorian style of design that is rooted in England but spread throughout North America in the 1880s. Popularized by playwright Oscar Wilde, other followers of the Aesthetic Movement included architect John Ruskin, designer William Morris and the American painter James Whistler.

Following the death of Mary Ann in 1911, the house was sold. In 1928, it was renamed ‘Coniston Place’ by the new owner, Dr. Charles Van Dyke Corless. In 1954, the home was passed on to Corless’s daughter, Florence Burn.

By 1981, however, Annandale House was facing possible demolition. Local citizens started a fundraising campaign to purchase and restore the home to its original condition. The group was able to raise over $1.3 million in community donations, while the municipality agreed to cover the ongoing operational costs.

Annandale House was designated a National Historic Site in 1997, with its interior recognized by the Historic Sites and Monuments Board as ‘the best surviving example of the Aesthetic Art Movement in Canada’. The home is now open to locals and visitors and includes a museum, programs and exhibitions. The museum, Tillsonburg’s first community museum, was created in 1973 and originally housed in the Evergreens Dance Hall. During the 1980s, the museum was relocated to Annandale House. The museum’s Pratt Gallery regularly showcases the work of local artists and items from the museum’s collection.