The Most Legendary Music Venues In Toronto 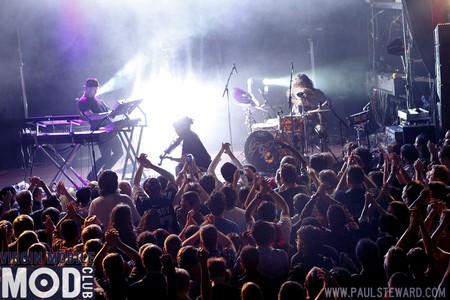 Courtesy of the Mod Club

Toronto has played host to concerts and musical performances for decades, its music scene growing exponentially. From internationally touring megastars to the city’s own booming indie and hip-hop music scenes, Toronto’s music venues host gigs of all sizes and styles. While there’s plenty of press on the countless artists playing throughout the city, here’s a chance to explore Toronto’s many venues and the stories behind them.

The Virgin Mobile Mod Club Theatre, better known as the Mod Club, began as a replacement venue for a weekly Saturday club night at the Revival, right across the street. The venue was a community centre, and then had a brief stint as a nightclub. Its presence in the music industry was cemented by a concert by the British band Muse, who often still hold their after parties at the club, even when they perform elsewhere. The theatre was sponsored by Virgin Mobile in 2011. While the 600-person venue’s focus was originally on British acts, it now organizes performances of all genres.

Building, Concert Hall, Music Venue, Theater
Facebook
Email
Twitter
Pinterest
Copy link
Share
Map View
Musicians know they’ve made it if they have the chance to play Massey Hall. As Canada’s oldest concert hall and the first building in Canada meant exclusively for musical performances, Massey Hall is a Toronto (if not a Canadian) institution. Massey Hall was constructed by industrialist Hart Massey in memory of his late son; Massey gifted the venue to the City of Toronto, with an official opening on the 14th of June, 1894, featuring a performance of Handel’s Messiah. For over 115 years, Massey Hall has opened its famous red doors to music enthusiasts, and musical geniuses such as George Gershwin, Ivor Stravinsky, and Neil Young have graced its stage. Over a century old, it is considered a Toronto Heritage site. While it is mainly a music venue, it has also hosted boxing matches, speeches, movie screenings, and meetings.
Open In Google Maps
178 Victoria Street, Old Toronto Toronto, Ontario, M5B 1T7, Canada
+14168724255
Visit Website
Visit Facebook page
Give us feedback

The Danforth Music Hall actually began as a movie theatre, and its long-standing musical reputation originated with performances before film screenings. The Danforth has experienced its share of trials and tribulations over the years. After falling into a state of disrepair, it closed in 2004. It was taken over and renovated a year and a half later; however, the tenants were evicted after failing to pay the rent, and The Danforth was closed down once again. Following its reopening in 2011, the venue has been a booming success, hosting over two thousand people (and even more memories). 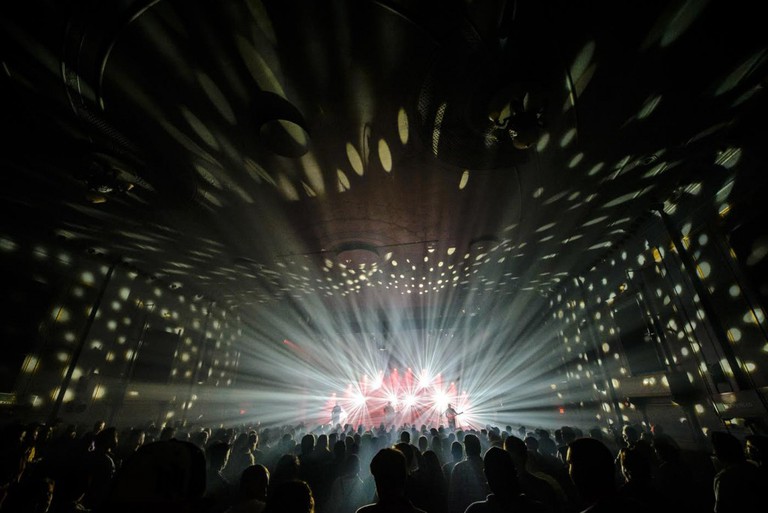 Courtesy of The Danforth Music Hall

While The Cameron House originally operated as a hotel, it’s now best known for hosting performances by folk and roots artists. Priding itself on live music every night of the week, this venue has also started its own record label, Cameron House Records. Covered in murals and giant ants (originally red, but painted white for Nuit Blanche in 2009) crawling over the façade, The Cameron House is easily recognizable. The venue has two rooms: a front lounge for music, and a backroom for theatrical and comedic performances. Known for its unusual décor, The Cameron House is a perfect place to discover new artists. While there is no cover fee, ticket prices do vary, so make sure to check the the lineup! 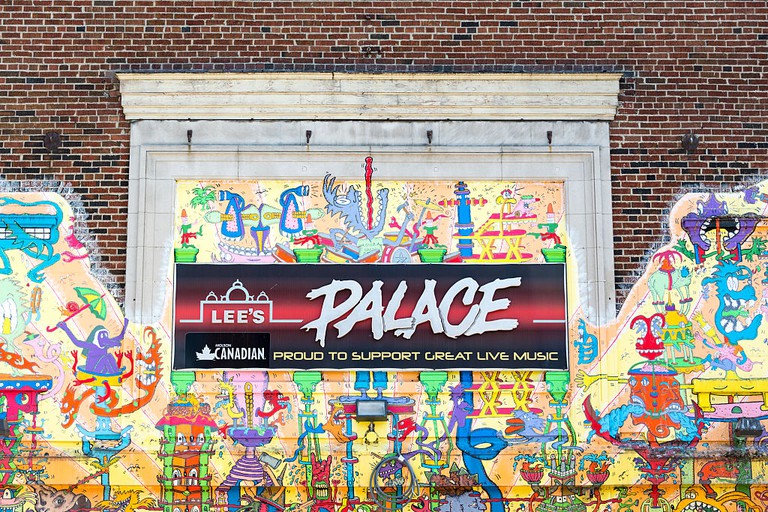 From local musical legends to world-renowned musicians, Lee’s Palace hosts the best rock gigs in the city | Roberto Machado Noa / Getty Images
Similar to The Danforth, Lee’s Palace was originally a movie theatre built by the same chain, and it was a shoemaker’s shop before that. Lee’s was then converted into a cabaret, inspired by NYC drag shows. The façade’s famous mural was created by Al Runt, who also did the one for The Cameron House (and the TTC Ride Guide!). The venue is a two-floor building; the first floor is for live music, and the second floor (known as the Dance Cave) acts as a nightclub. The live performances are typically alternative rock, although there is a bit of everything.
Open In Google Maps
529 Bloor Street West, Old Toronto Toronto, Ontario, M5S 1Y5, Canada
+14165321598
Visit Website
Visit Facebook page
Give us feedback 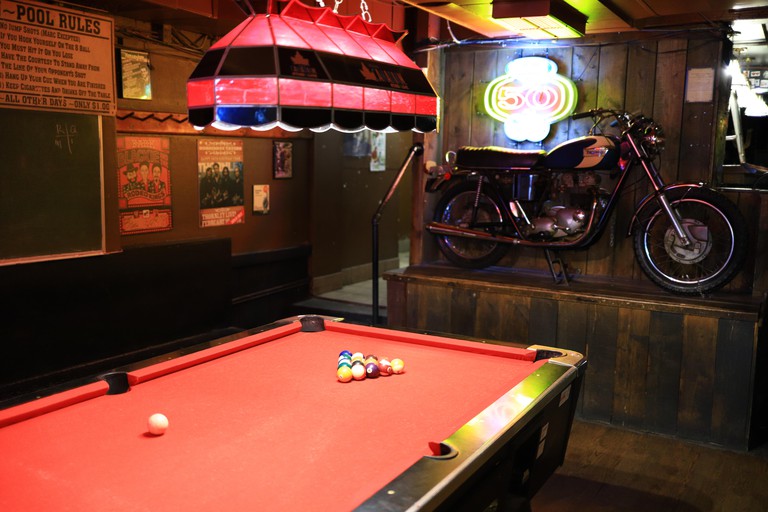 The Horseshoe Tavern is a legendary music venue in Toronto | © Serguei Dratchev / Alamy Stock Photo
A staple on the Queen West strip, Horseshoe Tavern gets its name from its past as a blacksmith shop. Initially meant for country artists, it gradually opened its doors to different genres. The tavern went through a punk and new wave phase and hosted legendary music acts such as The Rolling Stones and The Police in the late ’70s. Briefly a strip club, the venue now presents live music again, from unknown musicians to more famous bands. The Horseshoe Tavern is divided in two spaces; the backroom is dedicated entirely to music, separated from the bar at the front.
Open In Google Maps
370 Queen Street West, Old Toronto Toronto, Ontario, M5V 2A2, Canada
+14165984226
Visit Website
Visit Facebook page
Give us feedback

Theater
Facebook
Email
Twitter
Pinterest
Copy link
Share
Map View
The Phoenix Concert Theatre debuted as a nightclub on the weekend and is a concert venue during the rest of the week. The venue has hosted such artists as Bob Dylan, and Green Day in 2004, but it also hosts events and performances from various festivals, including the Toronto International Film Festival. In 2005, the owners felt the need to shut down one of The Phoenix’s regular events after three shootings happened in the span of a week, right in front of the building. Despite the controversy, The Phoenix has continued to thrive. With one of the city’s largest dance floors, the venue is a staple.
Open In Google Maps
410 Sherbourne Street, Old Toronto Toronto, Ontario, M5X 1K2, Canada
+14163231251
Visit Website
Visit Facebook page
Give us feedback 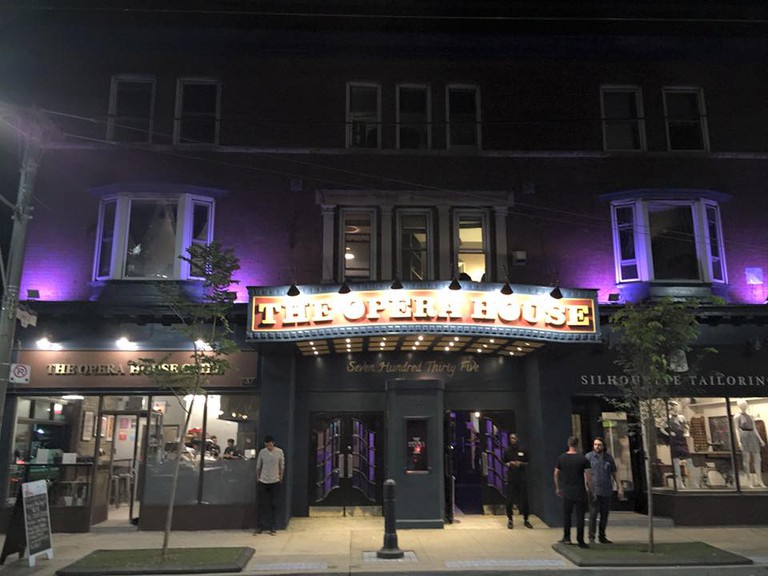 The Opera House, Toronto | Courtesy of the Opera House
Despite its name, The Opera House has never hosted operas. However, unlike many of these venues, its beginnings were always focused on music. The Opera House flourished as a Vaudeville theatre, mixing burlesque, comedy, and music, until films took over. The venue switched to musical performances in 1989 and made its reputation as a grunge club. With its 850-person capacity, it has hosted many bands and artists (like Nirvana in 1991) on the ascent, before they could make the switch to bigger venues.
Open In Google Maps
735 Queen Street East, Old Toronto Toronto, Ontario, M4M 1H1, Canada
+14164660313
Visit Website
Visit Facebook page
Give us feedback

Building, Stadium
Facebook
Email
Twitter
Pinterest
Copy link
Share
Map View
The Music Gallery got its start in the basement of a former YMCA on Queen Street W. Serving as a safe haven for musical experimentation, The Music Gallery was evicted from its original venue when the building was demolished in 2000. Refusing to stay down, a ‘Guerrilla Gallery’ was mounted for a year, with events happening in venues all around the city. Toronto’s ‘Centre for for Creative Music’ has now found a new home in the St. George the Martyr Anglican Church. The venue hosts everything from classical representations to jazz concerts and embraces all types of music.
Open In Google Maps
918 Bathurst Street, Old Toronto Toronto, Ontario, M5R 3G5, Canada
+14162041080
Visit Website
Visit Facebook page
Give us feedback
Give us feedback