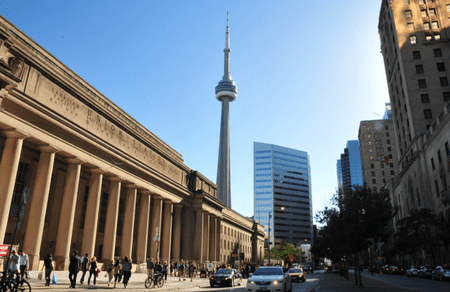 With over 2.7 million residents in the city, it can be difficult to distinguish a true local in Toronto‘s diverse population. There’s a constant influx of new Torontonians, moving to the country’s largest city to live, work, study and experience all it has to offer. Regardless of whether you’re Toronto born-and-bred, there are tell-tale signs that signal whether you’re a true Torontonian.

1. You Complain About the Weather – All of the Time

Whether it’s an ice storm, minus 30 degrees, humid or raining, you can’t help but complain to the person next to you. On the plus side, it makes for a great – or, usually is every – conversation starter.

2. You’ll Do Anything For Patio Season

As soon as it reaches eight degrees, you’re on the search for the closest patio without a lineup.

3. You Pretend to be, or are a Genuine, Blue Jays Fan

They haven’t won the World Series since 1993, but you’re still wearing blue and white. I mean, with Joey Bats and Encarnacion, who says this isn’t our year?

4. You Own Some Sort of Leafs Paraphernalia

You trash talk them one day, love them the next.

5. You Drink Beer, and Love It

There’s always a two-four (or a selection of craft beers) in your fridge.

6. You Hate on Tim Horton’s

You know some may argue Tim Horton’s is for country folk, and think their coffee is terrible. However, you can’t resist helping yourself to a box full of timbits.

Just like church: every Sunday. One (or three) caesars are generally on the agenda. So, perhaps slightly different than church.

8. You’re Polite, But Eye Contact is Something You Do Not Do

Directions? Yep, you’ll give those out. Eye contact? Never. Unless you’re good looking.

9. You Know, or Pretend to Know, The Best Places in Town

Whether it’s where to get the best foie gras or craft beer, you’ve got a list of spots in your back pocket, and you happily give them to others (as long as it makes you look like ‘you’re in the know’).

Biking and walking are preferred forms of transport, unless public transit is in need. Driving? Everyone knows parking is impossible. And you probably know at least one person without their G1.

You know you’re either going to be an hour early or an hour late, but won’t brave the rain and walk. Damn you, TTC.

12. You Don’t Pronounce The Second ‘t’ in Toronto

It’s ‘Toronno’. If you say anything otherwise, we know you’re not from here.

Uber is so great. Except when it’s on surge pricing. Which happens a lot. Which means you end up taking a taxi, anyway.

14. You Have One of the Following… Man Bun, Beard or Ombré Tips

15. You Never Step Foot into the Lake

And when you see someone do so, you know they’re a tourist.

16. You Call the Rogers Centre the SkyDome

17. You Avoid Eaton Centre at All Costs

Especially on Boxing Day. Or Black Friday. Or pretty much any day.

18. You Define Yourself by The ‘Hood You Live In

Queen West, The Annex, Leslieville. And you know the difference.

No zig zagging, stopping or walking slow. You know where you’re going and you’re on a mission to get there… fast.

20. You Know the Phrase ‘Believe!’ All Too Well

And it doesn’t scare you. Fools.

Even though you know he didn’t start from the bottom.

22. You Think Toronto is The Best City in Canada

And you probably have a map of TTC or a Canadian flag hanging somewhere in your room.