10 Films That Will Make You Fall In Love With Canada 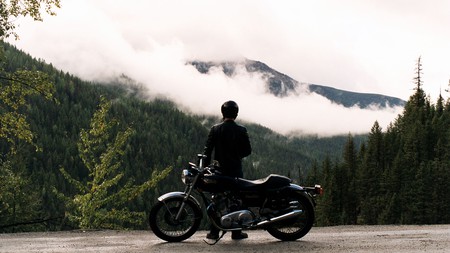 With its mountains, prairies, coastline, and cosmopolitan cities like Montréal and Vancouver, Canada glories in its topographical diversity and urban energy. Unsurprisingly, the cultural influences brought to bear on these settings by the country’s English- and French-speaking inhabitants have been reflected in an array of ground-breaking films. Some of them will leave you searching for the next available flight to the Great White North.

Director Michael McGowan’s One Week (2008) invests such life in Canada’s scenery that it feels like one of the characters. A comedy-drama, it tells the story of thirtyish Ben Tyler (Joshua Jackson), who sets off on a cross-Canada motorcycle journey after being diagnosed with cancer. Traveling from Toronto to Vancouver Island, he stops at many Canadian landmarks along the way, including Sudbury’s Big Nickel and the Fairmont Banff Springs Hotel. The settings range from British Columbia and Alberta to locations even some Canadians may not recognize, including Carman, Manitoba, and Minden, Ontario. The film is as Canadian as it gets, right down to the Tim Hortons ‘Roll up the Rim’ cup that advises Tyler, ‘Go West, young man!’ 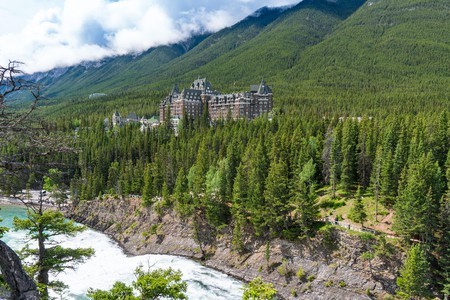 The Québec-based Les Boys is a 1997 comedy about a low-level amateur hockey team that can only stop its coach from losing his tavern by defeating a Mob team on the ice. As well as evoking the atmosphere of such Québec cities as Montréal and Longueuil, Louis Saia’s movie demonstrates the importance of hockey in Canadian culture and the endurance of Québecois masculine stereotypes. The original movie was followed by three sequels. They are collectively considered Canada’s most successful film series. 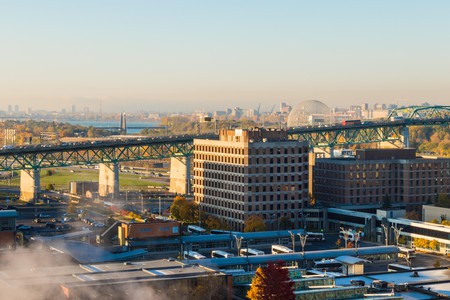 Scott Pilgrim vs. the World

Edgar Wright’s action comedy Scott Pilgrim vs. the World captures the unassuming hipness of Toronto, where it was shot in its entirety. Based on a graphic novel series by Bryan Lee O’Malley, it’s about the attempt of slacker bass guitarist Scott (Michael Cera) to win his dream girl’s affection by defeating her seven exes. Instead of highlighting such glamorous city landmarks as the CN Tower, the film demonstrates its Canadian-ness by emphasizing spots dear to young locals, such as Casa Loma, Pizza Pizza, the Toronto Public Library, and the Second Cup coffee shop, as well as many non-tourist neighborhoods. 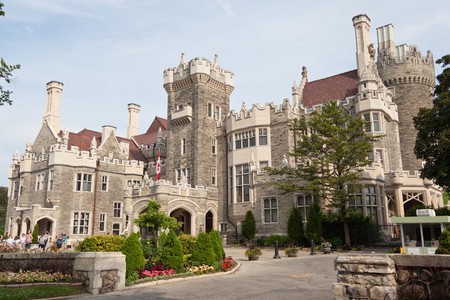 Set in a small British Columbia Town, Atom Egoyan’s melancholy 1997 drama, which he based on a Russell Banks novel, depicts the aftermath of a school bus accident that resulted in the deaths of 14 students. It was filmed in several locations across British Columbia and Ontario that show the eerie beauty and remoteness of the icy northern landscapes. The town’s isolation unites some of the town’s residents as they cope with their grief, though some members of the community doggedly pursue their own ends. The Sweet Hereafter, which remains the Armenian-Canadian director Egoyan’s’s best-known film, won three prizes at the Cannes festival and received Oscar nominations for Best Director and Best Adapted Screenplay, 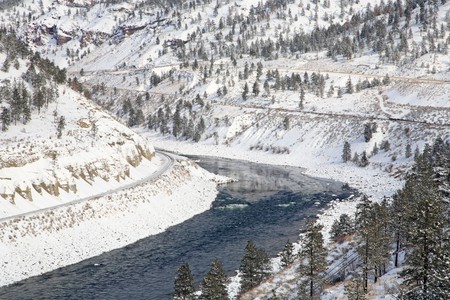 Writer-director William Phillips’s 2010 comedy Western Gunless plays on Canadians’ reputation for being polite and friendly. This is what the Wild West outlaw the Montana Kid (Paul Gross) discovers when, after arriving in a small town in the Canadian Rockies, he finds he can goad none of the locals into a gunfight. As well as spoofing national characteristics, Gunless is another movie that celebrates Canada’s dramatically diverse landscapes. Its producer was inspired to make the film after discovering a surreal, desert-like valley surrounded by mountains in British Columbia’s Okanagan Country. 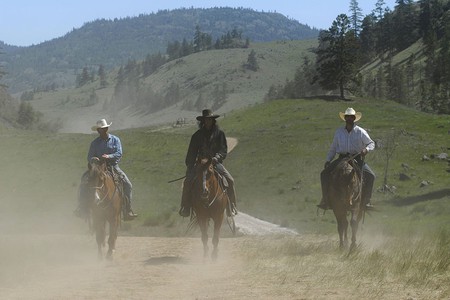 Following the death of his unfaithful wife, a reporter (Kevin Spacey) and his six-year-old daughter relocate, at the suggestion of his aunt (Judi Dench), to his ancestral Newfoundland home, where various family skeletons emerge from their closets. Lasse Hallström’s film of Annie Proulx’s Pulitzer-winning novel The Shipping News revels in the beauty of Canada’s often-overlooked east coast. The tiny fishing town of New Bonaventure, situated on the northeast shore of Trinity Bay, serves as the film’s fictitious village, Kil-Claw. The cinematography captures the moody allure of Newfoundland’s craggy cliffs, secluded coves, and mist-covered hills, as well as the unusual accent of the locals, which blends French, Irish, and Scottish Gaelic. 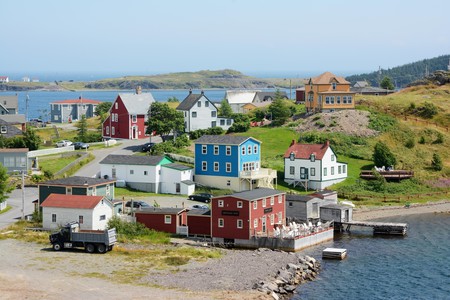 This buddy comedy-thriller, directed by Eric Canuel, offers insights into cultural stereotypes by exploiting the opposing crime-fighting styles of a conservative anglophone cop (Colm Feore) from Ontario and a reckless francophone cop (Patrick Huard) from Québec. Forced to work together after the body of a murder victim is found on the border of their neighboring provinces, they must resolve their differences but overcome their individual prejudices. The movie features cameos by such famous Canadians as comedians Louis-José Houde and Rick Mercer and the actor Sylvain Marcel, who is famous for his Familiprix pharmacy commercials. Bon Cop, Bad Cop was released in anglophone and francophone versions. 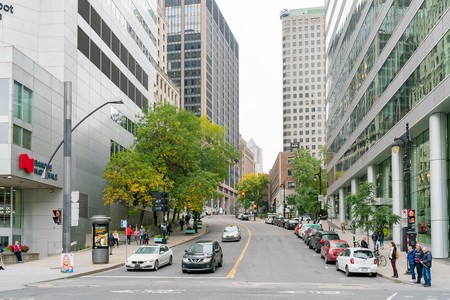 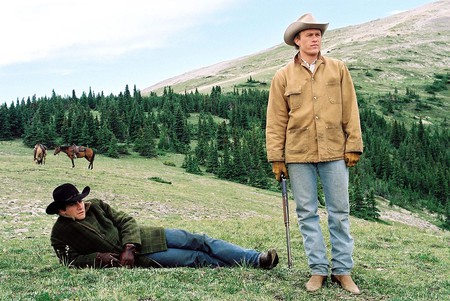 Goin’ Down the Road

This is the 1970 classic that proved English Canadians were able to make movies other than National Film Board documentaries. Filmed on a shoestring, Don Shebib’s realistic drama is about two unemployed Maritimers (played by Paul Bradley and Doug McGrath) who travel from Cape Breton, Nova Scotia, to Toronto in search of a better life. They find work and embark on romances, but their dream sours after they lose their minimum-wage jobs and turn to petty crime. With its abundant road-trip scenery, the movie is not the least important as a document of the eastern Canada in which it was shot. 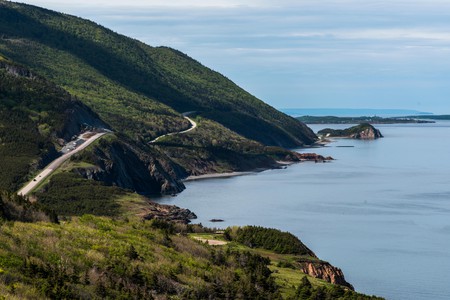 This 1985 miniseries, which was adapted by director Kevin Sullivan from Lucy Maud Montgomery’s ‘Anne’ novels, is set in fictional Avonlea, a farming and lobster fishing community in turn-of-the-century Prince Edward Island. Megan Follows plays talkative 11-year-old Anne Shirley, whose orphanage mistakenly sends her to live with the aging Cuthbert siblings (Colleen Dewhurst, Richard Farnsworth). They had expected a boy would show up to help them work their farm, but Anne, of course, becomes indispensable to them. Immensely popular, the series spawned further films in 1987, 2000, and 2008, as well as the 1989-96 Road to Avonlea series – 130 hours of television altogether. The worldwide popularity of the books and films has prompted thousands of fans to visit PEI. 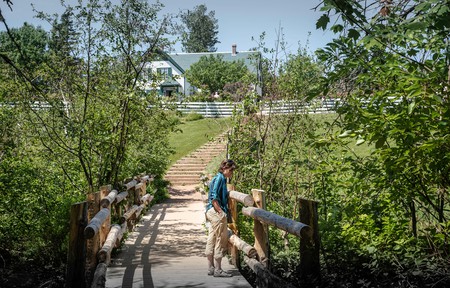