10 Canadian Films You Should Watch 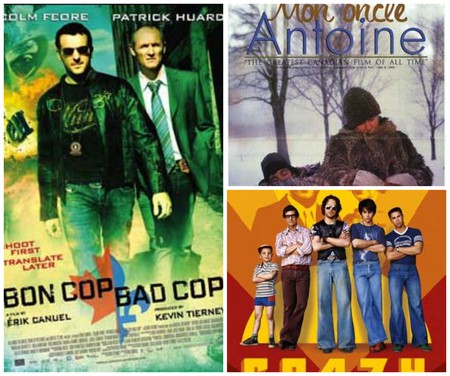 The history of Canadian film can be celebrated for its diversity of geography, language, and style. If you’re hoping to explore some of the most celebrated Canadian films of all time (not just those from Toronto and Vancouver), here is an overview that includes award-winning French, English, and First Nations cinematography that you won’t want to miss.

Despite the low production budget for this film, Goin’ Down the Road is recognized as being one of the most influential Canadian movies. The plot follows the adventures of two young men from Canada’s Maritimes, who move to Toronto in hopes of creating a better life. The slow decline of their circumstances is reflective of the social conditions in post-war Canada as many men left the eastern provinces for Ontario’s expanding economy.

Mon oncle Antoine (My Uncle Antoine) stands as one of the most highly regarded films in Canadian cinematic history. Set during Christmas, this film offers insight into life in rural Quebec during the 1940s. The story follows 15-year-old Benoît (played by Jacques Gagnon), who is coming of age in a mining town in the Asbestos Region of Quebec just prior to two pivotal historical moments: the Asbestos Strike of 1949 and the Quiet Revolution. The Toronto International Film Festival has placed Mon oncle Antoine first in the “Top 10 Canadian Films of All Time” three times.

The Decline of the American Empire (1986)

This comedy-drama follows eight intellectual friends from the Department of History at the University of Montreal who decide to meet up for dinner. Things start to unravel as they talk about their sex lives and delve into adultery, homosexuality, group sex, and prostitution. Hilarious, witty, and thoughtful, The Decline of the American Empire won nine Genie Awards as well as the International Critics’ Prize at the Cannes Film Festival.

Directed and co-written by David Cronenberg, Dead Ringers is a psychological thriller/body horror film that will leave viewers squirming. The film tells a twisted story involving identical twin brothers (played by Jeremy Irons) who operate a gynecology clinic together. Beverly and Elliot Mantle take advantage of their physique and their profession to seduce their patients until one patient starts to create tension between them. Despite the gruesome storyline, Dead Ringers is impressive in terms of its character portrayals and cinematography.

Atanarjuat, based on an ancient Inuit legend, was directed by Inuit filmmakers, making it he first feature film of its kind. Set in Igloolik, Nunavut, in Canada’s north, the plot follows the title character, whose marriage with his two wives causes tension with the son of the gang leader, who kills Atanarjuat’s brother and forces Atanarjuat to flee on foot. In director Kunuk’s own words, the film “demystifies the exotic, otherwordly aboriginal stereotype by telling a universal story.” Atanarjuat was a major critical success, winning the Caméra d’Or (Golden Camera) at Cannes along with six Genie Awards, including Best Motion Picture. It was also Canada’s top-grossing release of 2002. This film is in Inuktitut with English subtitles.

C.R.A.Z.Y. is a Québécois masterpiece that recounts the coming-of-age story of Zachary Beaulieu (Marc-André Grondin), who is struggling with his homosexuality amid strong homophobia while growing up with four brothers and an ultra-conservative father (Michel Côté) during the ’60s–’70s. The film received numerous awards, including the City Award for Best Canadian Feature Film at the 2005 Toronto International Film Festival.

Based on a short story by Canadian author Alice Munro, Away From Her is a heartbreaking tale about Grant and Fiona, a retired married couple whose relationship begins to fray as Fiona (Julie Christie) begins to suffer from Alzheimer’s and loses her memory of Grant (Gordon Pinsent) while at a nursing home. The film won seven of the eight Genie Awards it was nominated for, and it was also nominated for two Academy Awards.

This dark comedy thriller offers humorous insight into the historical tensions and stereotypes between the neighboring Canadian provinces of Ontario and Quebec. The film is a mix of English and French as an Ontarian and Québécois cop (Colm Feore and Patrick Huard) are begrudgingly compelled to join forces in solving a murder. The sequel, Bon Cop, Bad Cop 2, comes out in May 2017, 10 years after the original film was released.

The Trotsky tells the story of a precocious high school student in Montreal, Leon Bronstein (Jay Baruchel), who believes he is the reincarnation of the Russian Marxist revolutionary, Leon Trotsky. He is determined to live out every aspect of Trotsky’s life, from being exiled and eventually assassinated. In the meantime, however, he is intent on finding a Lenin stand-in and an older wife. After he begins working in his family’s clothing factory, Leon attempts to unionize the workplace, and then he takes on his high school principal in his quest to uphold his Trotskyist views. The movie is hilarious and full of unexpected turns.

Incendies is a haunting mystery-drama that follows Jeanne (Mélissa Désormeaux-Poulin) and her twin, Simon (Maxim Gaudette), as they retrace their late mother’s past back to an unnamed but war-torn country in the Middle East. The story is loosely based on the life of Souha Bechara. Incendies received eight Genie Awards and was nominated for Best Foreign Language Film at the Academy Awards.