10 Canadian Fashion Icons You Should Know 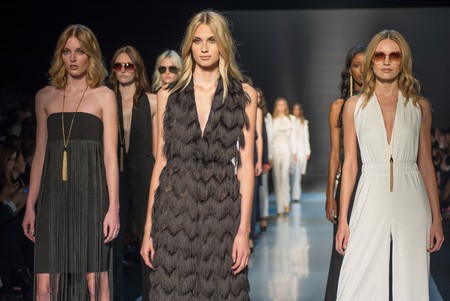 Canada is quickly climbing the ranks of the world’s fashion radar – with some of the trendiest neighbourhoods (see Queen West) and most popular designers around. Check out our guide for a rundown on some of the fashion greats as well as up-and-comers you’ll be sure to see more of on the runways in the coming seasons.

Kimberly Newport was born in Niagara Falls, where she discovered her passion for the fashion industry working as a retail associate in her early teens. This developed into the completion of an apparel manufacturing management degree at George Brown, which Kim moved to Toronto to pursue. She began her career as part of the buying team at The Hudson’s Bay Company, later moving to the product development and merchandising offices at Club Monaco, where she met future husband Joe Mimran- the pair becoming one of Canada’s fashion power couples. In 2012, Mimran launched Pink Tartan, a brand which has since found great success, with offices in New York and a flagship store in Toronto’s Yorkville neighborhood. Aside from its commercial and ready-to-wear sucess, Pink Tartan has also designed several corporate uniforms across the globe, from Porter Airlines, to the Roosevelt Hotel’s Tropicana bar in Hollywood, as well as Canada’s own Holt Renfrew.

Joe Mimran was born in Toronto to Jewish parents Eli and Esther. Best known as the man who launched Club Monaco (which he later sold to Tommy Hilfiger) as well as Joe Fresh, his interest in fashion was evident at a very young age, inspired by his mother who was a couturier. After completing two degrees, at York University and The University of Windsor respectively, his entrepreneurial journey began. Quitting his job as an accountant to expand his family-run dressmaking business, he worked with Alfred Sung, later opening his own Club Monaco store following failed offers of collaboration with The Bay and Eaton’s department. While others failed to see his minimalistic vision for basics, his flagship store on the trendy Queen West did better than expected. Polo Ralph Lauren purchased the company (and its sister lifestyle store Caban) in 1996, and Joe moved onward to Joe Fresh – a private-label apparel company sold in Loblaw Company superstores. The Joe Fresh brand now walks in bi-annual Toronto Fashion Week shows, and has partnered with Barbie and Scouts Canada in the past.

This duo’s meeting traces back to the halls of Branksome Hall high school in North Toronto – where they dreamed of starting a line together. Post-grad, the pair parted ways, with Smythe moving to New York to work as a designer at Gap, while Lenczner remained in her hometown of Toronto to take on a job as a buyer at Holt Renfrew. When Smythe moved back to the city in 2004, the pair got back in contact with the aspirations of designing a line – where they introduced their now iconic tailored jackets. The line was sold to Holt Renfew, launching the beginning of Smythe’s reign in Canadian fashion. Largely a homegrown success (the pair mention that it is largely due to the Canadian Press that they did so well), Smythe is now sold worldwide and beloved of many celebs – with their blazer having even graced the shoulders of the Duchess of Cambridge, Miss Kate Middleton.

Born and raised in Vancouver, Christopher Bates attended the University of B.C’s Institute of Technology. After working in marketing for several years post-grad, he decided to launch his fashion line in Canada. Having trained at the legendary Istituto Marangoni in Milan, he decided to relocate there, where his line is known for an attention to detail and a European flare. His signature “Romeo” dress shirt is embellished with a kiss on the collar– representative of the flair of his line. However, if you have plans to fly with Air Canada next year, you’ll get the chance to bare witness to his work. Christopher is in the works to design the airline’s new uniforms as part of a large-scale rebranding.

When pals Eran and Elisa met in elementary school, they always had aspirations to start a fashion line together. When Eran designed a line with his brother’s leather company, APP Group, Inc., it was so well-received that Elisa decided to join them to begin designing what is now known as Mackage. In fact, if you’ve frequented any North American city in the cooler months, chances are you’ve spotted the pair’s leather-embellished designs on some of the most stylish individuals around town. Officially launched in 1999, Mackage has since expanded to be one of the largest contemporary outwear companies in the continent. With hopes to make the “Michelin man”-style puffer coat sleek and stylish, Mackage has even appeared on celebs like Gwyneth Paltrow and Madonna.

When Kirk and Stephen met as neighbours in Toronto’s Queen West neighbourhood, they knew they were a match made in fashion heaven. The namesake of Stephen’s mother, Greta, and Kirk’s grandfather, Constantine: Greta Constantine was born. Originally a stylist, Kirk worked in Milan and has even guest taught at the world-renowned Istituto Marangoni. On the other hand, Stephen has worked as a costume designer for several movies in Toronto. Together, the pair have been casually dubbed the “jersey boys of Toronto”, as their line is now known for its unique use of jerseys that remains recognizable in their collections. Their long list of celebrity fans includes Jennifer Hudson, Canadian model Coco Rocha, Canadian singers Nelly Furtado and Jully Black, Angelina Jolie, fashion icon Victoria Beckham, and Naomi Campbell just to name a few.

Stay strong and proud. Veiled in our cape from #GCSS16, we adore @aluad_anei beaming confidence. #GretaGirl

One of Canada’s first luxury houses, Maison Saint Pierre quickly grew in popularity from when Marie became the first Québec designer (in 1989) to participate at the Fashion Coterie of New York. Just three short years later, she presented her first collection in Singapore. The influence of her mother as well as her love for art inspired her to take up an interest in fashion, which later lead to the completion of a diploma in arts and communications from Collège Brébeuf as well as in fashion design from Collège LaSalle in Montréal. Having achieved global success, Marie also dabbled in philanthropy. Her Sous Zéro fund provided assistance to women and children in need, as well as winter attire in the cooler months. The principle of Maison Saint Pierre has remained a combination of function and excellence in design for the modern women, retailing in its two flagship locations in Montréal as well as in specialty boutiques globally from the U.S to Hong Kong and Kuwait – though design and production are still entirely based in Marie’s home province of Québec.

Born in Drayton Valley, Alberta, Sid Neigum has quickly become one of the Canadian designers to look out for. With a Fashion Design and Apparel Production diploma in hand from Edmonton’s MC College, Sid moved to New York to attend the Fashion Institute of Technology while interning for designer Yigal Azrouel. He launched his own line at Toronto Fashion Week in 2011, later receiving several accolades for his first collection: from the Toronto Fashion Incubator’s New Labels Award to the Mercedez-Benz start-up award. His line was later picked up by The Room, an offshot of the Bay which retails luxury designers. A fashion innovator, his conceptual, interdisciplinary womenswear label combines the minimal with maximal and is appreciated for its non-conventionality.

Canadian-born, Australian educated Hayley Elsaesser is in a lane of her own. Since the label’s launch in 2013 (as a fashion graduate of Queensland University of Technology), Hayley developed an almost cult-like following in Australia, soon later moving back to Toronto to open up her flagship store (fittingly) located on Queen West. In just two years, the brand has stockists across the world (including popular online store NastyGal) with a celeb following to boot: her designs even graced a Madonna music vid. Hard to miss, the line features bright colours and in-your-face prints for the brave at heart and is adored by some of the largest fashion publications, from NYLON to Vogue.

💦 Swimwear is live on HAYLEYELSAESSER.com! 💦 there is one more day to enter to win one for you and a friend so make sure to enter (see previous post). 💘 photo: @ghostburns model: @lexiwood MUA: @benepham

Duy Nguyen first caught the attention of Canada’s design elite in 2012 after winning the Mercedes-Benz Startup, also known as Canada’s leading mentorship program for young designers. Duy specializes in custom designs: from business to gala wear, his designs are anything but casual. With an evidently simplistic yet elegant craftsmanship in mind in everything he produces, he has even collaborated with several other fellow Canadian icons on this list, from lines Pink Tartan and Marie Saint Pierre. Following a short moment out of the spotlight, most recently, Sophie Grégoire-Trudeau was spotted in a DUY design on her trip to Washington – recapturing the attention of the Canadian fashion elite.