Why Frances McDormand Is Probably Heading to Another Oscar Win 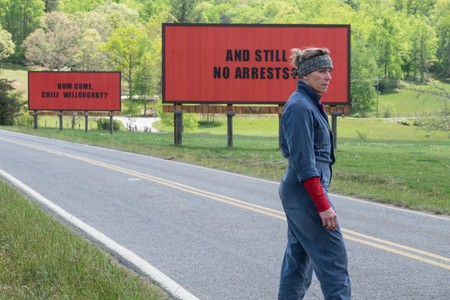 Twenty-one years after Frances McDormand’s portrayal of a pregnant Minnesotan police chief in Fargo won her an Oscar, she stands a strong chance of winning another for playing a woman who rubs a sheriff’s face in the mud in Three Billboards Outside Ebbing, Missouri.

Seventy one days before the Oscar nominations on January 23, the competition for the Academy Award for Best Actress is shaping up. At the time of writing, McDormand is the 14/5 favorite at the Gold Derby website, followed by Sally Hawkins (The Shape of Water, 3/1), Saoirse Ronan (Lady Bird, 6/1), Meryl Streep (The Post, 15/2), and Margot Robbie (I, Tonya, 12/1).

Currently 10th and 11th on the list are Kate Winslet (Wonder Wheel, 80/1) and Annette Bening (Film Stars Don’t Die in Liverpool, 100/1), but I think they’ll both overleap Jessica Chastain, Judi Dench, Nicole Kidman, and Emma Stone to come into serious contention once their films have been seen more widely.

Streep can never be discounted, of course. Assuming she’s nominated, some Academy voters may want to give her her fourth Oscar, meaning she would draw level with Katharine Hepburn for the number of wins, though Hepburn’s were all as Best Actress while Streep’s Kramer vs. Kramer win was in the Best Supporting Actress category.

In Steven Spielberg’s newspaper drama The Post, Streep plays the Washington Post publisher Katharine “Kay” Graham, who with her editor Ben Bradlee (Tom Hanks) challenged the federal government over their right to publish the Pentagon Papers in 1971.

I haven’t seen the film yet, but the trailer suggests Streep’s Graham has to draw on all her judgement and nerve to make the right decision. The Post may prove a little cerebral for Academy voters, but that didn’t stop another dry newspaper movie, Spotlight, winning Best Picture in 2016.

Mildred (Frances McDormand) under one of the billboards | © Fox Searchlight

What makes McDormand a stronger contender? Paradoxically, it could be something to do with how un-ingratiating her character is. Whereas McDormand’s Swedish-American cop Marge Gunderson in Fargo was thoroughly likeable, her Mildred Hayes in Three Billboards is the opposite. In one of the funniest scenes in Martin McDonagh’s mordant black comedy, this hard-faced single mother gets out of her car and beats up two high-school seniors.

Mildred’s main offence, as far as most of the locals are concerned, is renting three dilapidated billboards on a road into town. She had them painted red and messages painted on them, excoriating the failure of Sheriff Bill Willoughby (Woody Harrelson) to arrest the man or men who murdered Mildred’s teenage daughter, Angela (Kathryn Newton, seen in a flashback), seven months previously. 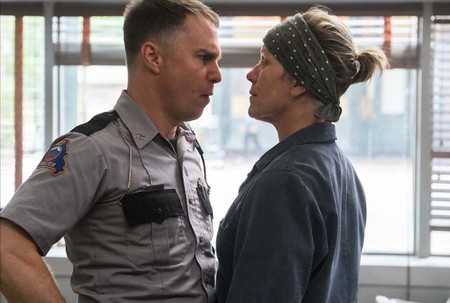 One of the signs says, Angela was “Raped while dying.” No wonder Mildred is consumed with the need for retribution. Her billboards start a feud between her and Willoughby and his deputy Jason Dixon (Sam Rockwell), a swaggering, racist, violent dimwit who still lives with his mom. She accuses Willoughby’s office of “being too busy torturing black folks” to catch Angela’s murderer. She further takes out her anger on the Willoughby support group by grabbing his friend the dentist’s switched-on drill and pressing it against his thumbnail.

Vituperative, foul-mouthed Mildred, who lives with her wary, fed-up son (Lucas Hedges) near the billboards—her worn-down husband (John Hawkes) having left her for a brainless young beauty—seems as hard as hickory. But she shows to the audience a side that she doesn’t show anyone else. Tending flowers by the billboards one day, she starts to sob.

On the evening Angela left home for the last time, she and Mildred had been fighting, and Mildred sent the girl off with a horrible curse. Mildred is so racked with guilt that she has to diffuse it by making sure the town’s dominant males don’t shirk their moral accountability, their crime being that they are the same sex as the killer.

She is not exactly reasonable—how could she be, suffering what she suffers? But she has her supporters, including the advertising manager Red (Caleb Landry Jones), who rents her the billboards, and James (Peter Dinklage), who covers for her when she firebombs the sheriff’s office. 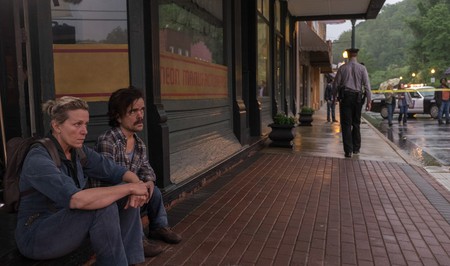 Everyone likes Willoughby, an affable, blissfully married Midwestern good ol’ boy type. Even Mildred likes him a bit. He explains to her that his investigation came to nought because he’d exhausted all the leads, and because it was likely that the rapist-killer(s) may have just been passing through. Mildred’s campaign against Willoughby is especially unpopular because he has terminal pancreatic cancer. Once he dies, the film drives toward an unlikely rapprochement between Mildred and Jason.

McDormand has always possessed a withering glance, but here the withering is an expression of the whole woman. Her speech, her body language, her comportment are practically cauterising. It’s important to take a long view of her life, which has essentially been ruined by Angela’s death and the manner in which she was killed. The film offers some hope that she may eventually come to terms with other people and relinquish her yearning for vigilante justice, as must Jason who comes at revenge from a different perspective.

What McDormand pulls off in Three Billboards is making pain and rage emotions to empathize with—though her titanic performance never sanctions acting upon rage when the outcome will be someone else’s pain. Mildred’s arc suggests that the furious should sublimate their fury until they arrive at a place where it can be extinguished. Peace of mind may be elusive, but at the end of Three Billboards you can see Mildred grasping for it. A genuine anti-heroine, she has infinite humanity.

Three Billboards Outside Ebbing, Missouri is currently on release in the U.S.