Timothy Spall Makes an Early Oscar Bid in "The Journey" 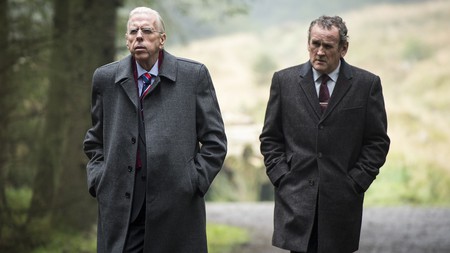 The British actor is currently in razor-sharp form. His unerring portrayal of the Ulster Protestant leader Ian Paisley is one of the finest of his career. Nick Hamm’s curious movie speculates what would have passed between then militant unionist Paisley and the Sinn Féin leader Martin McGuinness (played by Colm Meaney) had they shared a car trip in Scotland in 2006. Mortal enemies at the time, owing to three decades of sectarian violence, the Northern Ireland politicians met for multi-party talks in St. Andrews on October 11-13 that year.

The resulting St. Andrews Agreement facilitated Sinn Féin’s acceptance of the Police Service of Northern Ireland (successor to the Royal Ulster Constabulary), the restoration of the Northern Ireland Assembly, and, crucially, the commitment of Paisley’s Democratic Ulster Party to sharing power with Irish Republicans. A master of inflammatory rhetoric, Paisley had long opposed civil rights for Northern Ireland’s Catholics. 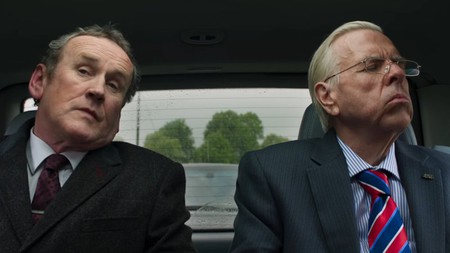 Paisley and McGuinness never shared a car at this time, but did fly together in a private jet. Paisley died at age 88 on September 12, 2014; McGuinness died at 66 this March 21. Neither disclosed what they said to each other, if anything, in the air. But they apparently worked so well together after the St. Andrews talks that the British press dubbed them “the Chuckle brothers” after a slapstick comedy duo; it may be a stretch to say they became friends.

The essence of The Journey is McGuinness’s campaign during the brief car ride to break down Paisley’s implacable hatred of the Republicans, or at least to find a chink in his armor. The soft spot he finds is Paisley’s coveting of a legacy as the man who finally brought peace to Northern Ireland—and the country’s official leadership.

A walk in the woods

Written as a humanistic comedy by Colin Bateman, The Journey—which features John Hurt as the MI5 chief who sanctions the road trip, and Toby Stephens as an entertainingly sycophantic and neurotic Tony Blair—doesn’t always feel plausible.

Their driver, an inept undercover MI5 agent (Freddie Highmore) who detours in a rural area to give McGuinness more time to win Paisley over, hits a stag, This occasions a contrived episode in which the passengers go for a walk in the verdant woods. (It’s poetically just that the film wasn’t shot in Scotland, but in Northern Ireland.)

More resonant is the subsequent scene in an empty church that allows Paisley to climb into the pulpit—only to feel his oratorial powers have deserted him. He rallies amusingly at a filling station when, needing the recalcitrant attendant to cooperate, he blasts him with the story of Jesus’s Cleansing of the Temple. The knowing look he then gives McGuinness and the driver is priceless.

It’s conceivable that the Chuckle Brothers chatter inspired the notion of casting Spall and Meaney as a barbed comedy act. Meaney plays the former Provisional IRA member as the warm, affable stooge of Spall’s sneering, embittered curmudgeon. Having played the Holocaust- denier David Irving as a gimlet-eyed rationalist in Denial (2016), Spall has brought a new razor’s edge to his presence. 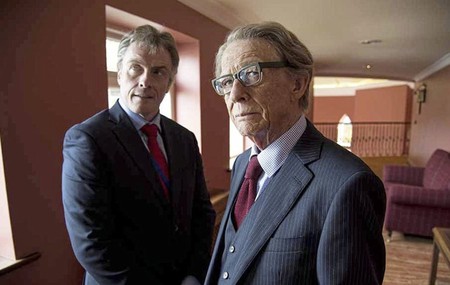 His Paisley (much better than his Winston Churchill in 2016’s The King’s Speech) is a staggering impersonation. More important than his capturing of Paisley’s pompous religiosity and his repressed whinnying laugh, however, is his evocation of the man’s ironclad conviction, at least for five-sixths of the film, that he’s in the right and McGuinness, and all Republicans, are in the wrong.

Though there are flashes of sentimentality in the old man, Spall doesn’t make him an ingratiating figure. But he does help us to understand him. It’s a great performance that’ll hopefully be remembered come awards season.

The Journey is currently playing at the IFC Center in New York.