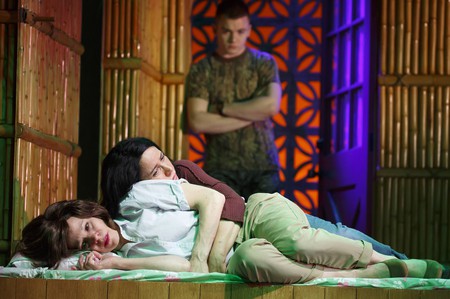 The Roundabout’s excellent revival of Scott McPherson’s play is a reminder that where there’s darkness, light often shines through.

Judging Marvin’s Room by its plot, you might assume it is a dark, depressing play. After all, it concerns sickness, doctors, old age, bad parenting, estranged siblings, and a troubled teenager. Its somber aura was compounded by the early death of its author, Scott McPherson. He died at age 33 from complications from AIDS in 1992, shortly after the play became a hit Off Broadway. 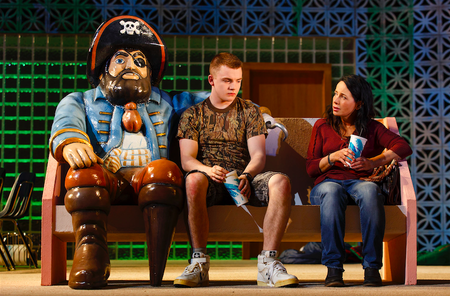 Yet, against all odds, Marvin’s Room is very funny. McPherson had the rare ability to look at serious subjects with a wry sense of humor. The Roundabout Theatre Company’s fine revival, sensitively directed by Anne Kauffman, brings out the humor and pathos in equal doses.

Bessie (Lily Taylor) lives in Florida with her aunt Ruth (Celia Weston) and father Marvin (Carman Lacivita). Ruth takes lots of pills, is glued to her favorite soap opera, and tries to be helpful but is so forgetful that she’s pretty useless. Marvin, visible in bed through a glass-brick wall, has diabetes and is hooked up to an oxygen tank. Apparently he’s been in the process of dying for 20 years. “He’s been doing it real slow so I don’t miss anything,” Bessie says.

A selfless caregiver for her father and aunt, Bessie has an appointment with Dr. Wally (Triney Sandoval). Dr. Wally appears to be inept. He can’t keep his patients’ names straight—and can barely draw blood. He is, however, able to read test results, and it turns out Bessie has leukemia and needs a bone marrow transplant. So she contacts her long-lost sister Lee (Janeane Garofalo) to see if either she or one of her boys, Hank (Jack DiFalco) and Charlie (Luca Padovan), is a match. 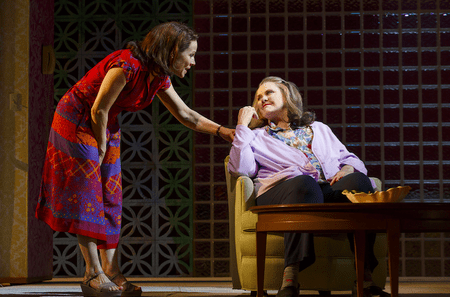 Hank is in a juvenile prison, which he prefers people call the “loony bin.” The reason? He burned down the family’s house, and the fire spread. He and Lee have a testy, often toxic relationship. Everything Hank says draws an extreme reaction from Lee, who has a short fuse and is a terrible mother.

Bessie has a good rapport with Hank and handles him better than Lee does. But Lee still won’t commit to having the test to see if he’s a bone marrow match. His younger brother Charlie is bookish, well-behaved, and will probably turn out to be gay; it’s easy to spot him as McPherson’s younger self.

Since this is McPherson’s only major play, who knows what else he might have written if he hadn’t been one of the hundreds of thousands of American casualties of AIDS? Marvin’s Room brims with wisdom, hope, compassion, and all-too-human characters. For much of the play, I found Ruth’s uselessness annoying. But after Bessie becomes sick, McPherson gives the aunt and niece a beautiful scene together. Like the rest of the play, it manages to be both comic and touching.

I saw Marvin’s Room in the early 1990s, and I still remember Laura Esterman’s remarkable performance as Bessie. It was far better than Diane Keaton’s portrayal of Bessie in the disappointing 1996 film (which starred 22-year-old Leonardo DiCaprio as Hank.)

Taylor, who has extensive theater credits, doesn’t make Bessie a saint. She shows her frustration and anger when confronted with illness. But she never feels sorry for herself for having to take care of her bedridden father. “I can’t imagine a better way to spend my life,” she says.

Garofalo, making her Broadway debut, is terrific in the much less sympathetic role of Lee. As Hank, who can’t help himself from acting out, DiFalco speaks matter of factly and is always believable. The rest of the cast is similarly grounded but able to bring out the absurdity McPherson located in everyday situations.

Best known for directing new works Off Broadway, Kauffman makes an assured Broadway debut. The only problem with the production is that the American Airlines Theatre’s stage is so damn wide. Kauffman’s staging uses the whole stage, but Laura Jellinek’s set (featuring a huge background of concrete latticework) draws attention to how vast it is.

That’s a small quibble, however. Marvin’s Room is a lovely play, and this production brings out its wit and its heart.