The Wisdom of Jerry Lewis, Twitching Jester of American Comedy

Here, in his own words, is Jerry Lewis, the heir—as both put-upon “little man” of comedy and inspired director—of Charles Chaplin and Buster Keaton. Lewis died at his home in Las Vegas at the age of 91 on August 20.

Lewis was wearing a blue cashmere sweater, slacks, and loafers when I interviewed him for Interview magazine at a suite in the Waldorf-Astoria in Manhattan, in February 1995. The occasion was Lewis’s Broadway debut in Damn Yankees. He was warm, ebullient, and quick to heap praise on his former comedy partner Dean Martin, who would die at 78 that December. 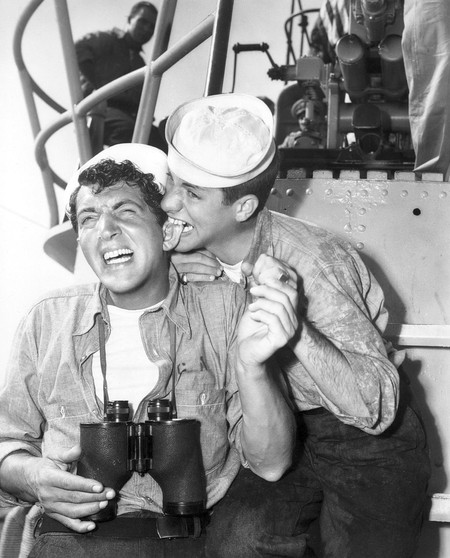 Not that there was an ounce of false humility in Lewis, then 68. “I don’t want to sound like I fear self-aggrandizement,” he said. “I don’t. I I feel that I should aggrandize myself, I will—I have no problem with that. But the genius of Martin and Lewis was my partner. He kept the center. He was the spine of the act. And the monkey [Lewis’s term for his comedy persona] was constantly attached to that spine, on the spine, next to it. And when I was distant from the spine, the spine never wavered. Dean gave Jerry the freedom to explode, but no one ever gave him his due.”

After the interview, I wrote these words, none of which I would change. “Was there ever an entertainer as driven, as egocentric, as giving, or as complex as Jerry Lewis? Look at the hats he has worn. Beloved Borscht Belt geek, most successful American comedy actor of the postwar period, endlessly inventive auteur (lone successor of Keaton and Chaplin) adored by French cineastes, tenacious telethon presenter (raiser of millions of dollars for children with muscular dystrophy), acerbic Las Vegas phenom: Lewis is the personification of the American Dream in all its sweetness and bitterness. 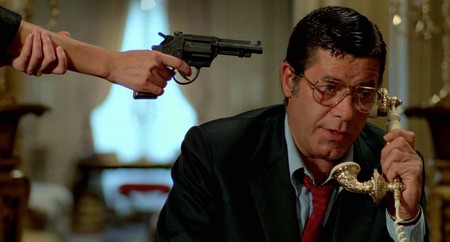 Lewis as Jerry Langford in The King of Comedy | ©

“Try reconciling the simpering, sentimental, ergonomically challenged fool he played through the ’50s and early ’60s with the remote, resigned Jerry Langford of Martin Scorsese‘s The King of Comedy (1983) and you come undone. He is a man who inspires extreme reactions because he has lived and acted in extremis, but there is no question of his greatness.”

The following excerpts from our interview reveal how wise Lewis was in his late sixties, but also some of the inherent contradictions in the man.

On becoming an entertainer

“When your father’s on the stage doing a show at three o’clock in the afternoon, and your mother is watching him, and then at eleven o’clock you’re born, and he’s trying to finish his last show to get to the hospital, and then you have your first breast-feeding in their dressing room—when you start like that, that’s what’s called getting it in the bones. At five years old I got my first tux and performed with my father and mother.” 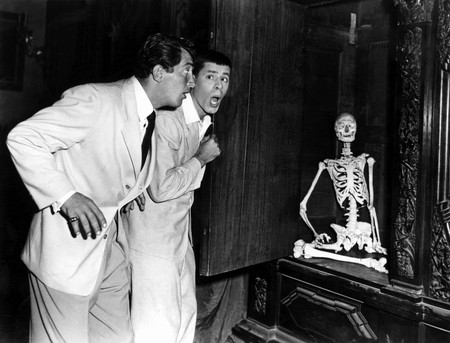 When his comedy persona emerged

“On my ninth birthday. I never had another birthday after that. At nine years old you have the freedom of expression and the kind of understanding from people around you that allows you to invent and explore, and I had a wonderful time being the clown. It enabled me to get through what would have otherwise been a very difficult childhood during the Depression years.”

Why he made “Jerry” a nervous, vulnerable, pathetic nerd

“Everybody you see today is that character. They’ve covered it a little bit with makeup, but the bottom line is, everybody’s nine. And the very thing that spirits an individual to passion and energy and inspiration is coming from the child within.”

Why he didn’t opt to be a conventional leading man

“I could have elected to do that. But one of the things that comes with the creative process is recognizing your limitations. Though it appeared that I could do anything I wanted to do and do it well, that doesn’t mean it would have been right… . If I had chosen to compete with Paul Newman that would have been stupid, just as he would never attempt to do what I do. I knew that the character I portrayed was Everyman, and my laboratory was and is everyone I see in the street, the people that communicate with me during the course of the day, and they represent a texture and a chemical force that I file. Nothing gets by my eye.” 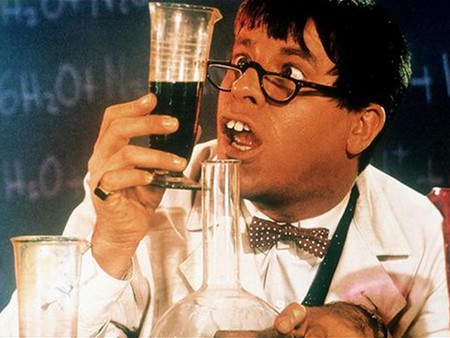 Lewis in the title role of The Nutty Professor | © Paramount Pictures

On clicking with Dean Martin

“It was the same chemistry, and this may sound weird—well, I don’t know how it’s going to sound—that happens when the sperm and the egg make contact and can reproduce a magnificent miracle… . What was it? It was the two things that make great comedy: a handsome man and a monkey. Beneath that there was the idea of this kid who thought that this big, handsome Italian was the cat’s meow. With Dean, I finally got my brother.”

On Martin as an actor

“Dean just shows up as Dean, and I’ve got news for you: That’s very difficult. When I did The King of Comedy I had the hardest fucking time maintaining Jerry Langford because that character was so close to my breast; he lived a lifestyle not unlike mine, with all the stalkers and bullshit that disrupt your life. But it was no problem for Dean to bring Dean to Rio Bravo [1959] or Robin and the 7 Hoods [1964]. He made it look easy, but he worked very hard at honing the character that he had developed, which was not unlike Dean on a very personal level.”

On breaking up the act

“After about eight-and-a-half-years…we went through a transference. We didn’t have a feud; that’s not what was happening. What was happening was Dean’s need to go away and say, ‘I can do something without the monkey.’ The monkey also at that time was saying, ‘I don’t want to just be a monkey anymore; I want to create for the monkey.’ So we both had those feelings. We were also aware that if we continued we’d risk failure. There was some bitterness in the split because we love each other so much.” 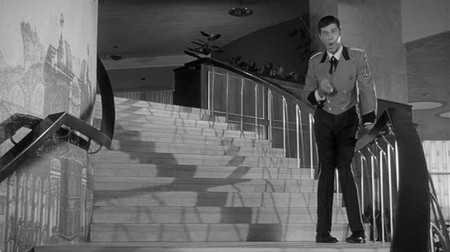 Jerry Lewis in The Bellboy (1960), which he directed at the Fontainebleau Hotel, Miami Beach, Florida | © Paramount Pictures

“The day that I couldn’t get Billy Wilder to direct The Bellboy [1960], I called home and said, ‘Dad what do I do? Do I now ask the Directors Guild for a roster of who’s available.’ He said, ‘Jesus Christ, if you can’t get Billy Wilder, do it yourself. You’ve been in the picture business 12 years.’ So I did do it, and I put in as much time learning my craft as a young man does when he’s going to be a brain surgeon.”

“A lot of people said, ‘Look at what he did to Dean!’ Oh, come on—give me a break. Buddy Love?… . I thought of the following, without exaggerating: the Grand Wizard of the KKK, George Lincoln Rockwell [founder of the American Nazi party], Attila the Hun, the Marquis de Sade, the guy in a singles bar who wants to smack a lady at the bar, a child molester, a rapist, a murderer, a con man, a sleazeball—all the things in the human condition that repel you.” 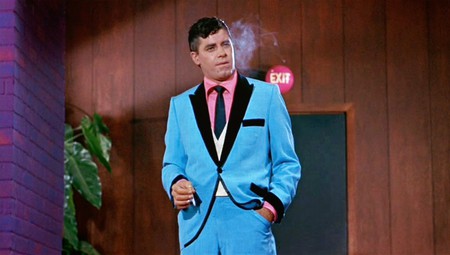 Lewis as Buddy Love in The Nutty Professor | © Paramount Pictures

On the need for approval

“If you didn’t have it, you would feel something’s lacking, but you wouldn’t know what exactly. You don’t say to yourself, ‘Well, I’d better get up now, and in the next hour I need three pats on the back, two kisses, and an ‘I love you, Jerry.’ But if the day came when none of that happened, you’d wonder what’s wrong.”

“You acquire an inner strength because you can’t go through it and come away unscathed. You also take precautions that it doesn’t happen again, and at the same time you learn that you’ve picked up some wisdom. I went through my roughest time in the 1980s. I had bypass heart surgery—in fact, I left this place and they had to bring me back. Dr. Michael DeBakey said, ‘Well, you’ve got eight lives left, kid.’

Then, in 1992, I had prostate cancer surgery, and DeBakey said, ‘Now, you’ve got seven lives.’ I never thought at 38 that life is short, or that life can be snuffed out in a heartbeat. When it happens to you at 55, and then again at 65, it’s very unnerving, and it makes you sit back and count your blessings. You look to your wife, you look to your child, these magical elements that could have been lost. The only thing I fear about dying is that I won’t be able to see them, but right now I’m thinking about my next birthday, and then the next one… .”