The Breast Cancer Story All Women In Their 20s Should Read 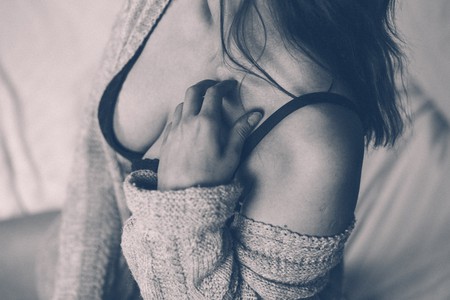 When you’re in your twenties breast cancer can seem like no concern of yours. Until suddenly it is.

In November of last year, Jennifer Hodson was diagnosed with breast cancer. At 29 and with no family history of the disease, she was one of the few women her age who manage to catch it at an early, treatable stage — all because she was vigilant enough to examine her body. At age 20 the risk of breast cancer is one in 1,732. By 30, one in 227 women are diagnosed. Yes, the statistics are far higher in older women, but do you really want to bet your life on the numbers?

Here, Jennifer shares her personal journey with bravery, vulnerability and an unshakeable sense of humor, in the hope that her fellow twenty-somethings will make a habit of checking their breasts, too.

“One morning, during my shower, I realized it had been some time since I had done some self-examining. I try to feel ‘the ladies’ up as regularly as possible, an ode to the best advice I have ever received from a gynecologist: ‘no one will ever feel for imperfections as well as you do. You know your breasts. You shouldn’t wait for anyone else to examine them.’

I switch from left to right, right to left. One of these things is not like the otherrrrrr, I sang somewhat cheerily. And then it hit me; there was a lump in my left breast. I slowed down, took a deep breath, hardened my focus and started again. Left hand above head, right hand to left boob, slow circles. Switch sides. Lump still there.

The lump was tiny. It felt soft and pliable — like muscle that had walked into the wrong room in my chest — and there was nothing like it on my right side. The lack of symmetry terrified me, so I called my primary care physician and scheduled an appointment right away. I was able to see him later that day and he recommended I get an ultrasound to rule out any abnormalities. ‘You’re so young, it’s probably nothing,’ he said. (Spoiler alert: it was something).

Thankfully, I had an amazing trip to Iceland planned in between the lumpy discovery and ultrasound finale, which served as a tolerable distraction. I spent most of it taking landscape shots on my iPhone, sipping delicious wine and declaring, ‘It’s probably just a cyst’ to all my friends, who dutifully agreed with me.Approximately a week later I was back at the hospital, getting an ultrasound done. It turned into a mammogram, which then turned into another mammogram, which then turned into a biopsy, and that’s when I knew my cyst theory was falling apart. As I was prepped for the biopsy, the radiologist came in and said, ‘sweetie, I am so glad you felt this.’

11 Quotes on Minimalism That Will Inspire You to Live a Simpler Life
Oil Pulling: The Natural Way To Whiter, Healthier Teeth?
How Healthy Is The Vegan Diet? Experts Weigh In

They called me back the next day, November 17 (approximately two weeks after I first found the lump) to confirm I had breast cancer. Things tend to move quickly when you have cancer. All sorts of people start calling you and scheduling tests that you barely understand. Goodbye, happy hours and hello, bilateral MRI guided breast biopsies, super chic hospital wear, etc.

From there, I met with my surgeon, and then I met with my oncologist. I have a treatment plan, I am moving forward and I am fortunate that I am able to. But if there’s any doubt in your mind about how important feeling yourself up is, let me quote my oncologist the first time she examined my breast: ‘Is this it? No, that’s your collarbone. Is this it? There it is. It’s back in there. Wow, I’m so glad you felt this. You know, most women your age come in with advanced Stage 3 and Stage 4 breast cancer.’ My tumor was 2.7cm; it placed me in Stage 2.

Being told I had cancer started a marching band in my head, which to this day has not stopped. It mainly marches to the beat of uncertainty, anxiety, and fear. I was diagnosed with Estrogen/Progesterone+ and HER2+ invasive ductal cancer. It would require me to undergo targeted therapy and chemotherapy before any type of surgery — the opposite way around to most diagnoses.

After a few days of proper Golluming it at home, I have decided to put on an outfit that isn’t pajamas… and say hello to the outside world. #fromthechemoegg ☀️(bonus points if you can find chewie 🐶). A photo posted by Jen Hodson (@jenhods) on Jan 24, 2017 at 5:52am PST

Chemotherapy is one nasty-ass process. Not only does it wreak havoc on my immune system, cause harsh physical side effects, and generally take up time in which I would otherwise be frolicking, it could render me infertile. I don’t even know if I want children, but it’s my choice to not have any idea about my life. Well that’s what I thought, but it’s not true anymore. I was told that not only would I stop having my periods during chemotherapy, but if they somehow came back (I’m young, so they might), they would be spitting out eggs that had aged ten years thanks to the poison.

There was a solution offered to me, and that was the option to freeze my eggs through oncofertility methods. I was allowed two weeks for the process (normal fertility methods allow two full menstrual cycles) which consisted of daily hormone injections, transvaginal ultrasounds every other day, and a grand egg harvesting finale. Oncofertility allowed me to keep a choice that cancer wanted to take away, and it’s a promising option for any pre-menopausal woman who’s been diagnosed.

After my two week crash course in what my ovaries look like, the rest of my treatment plan became more clear; I would have several tests done to help define other areas of concern, get a port placed in my chest, go through six rounds of chemo, and eventually figure out which surgery would be the best for me. Once my surgery is defined, I will know if radiation therapy will be involved. Although there is no history of breast cancer in my immediate family, I will submit a sample for genetic testing, as this could alter the surgery plan as well. Each step of the cancer journey opens another piece of the puzzle box, and my treatment plan is ever changing.

It’s now January 2017. I have completed the first two rounds of chemotherapy and am anxiously awaiting the day I can say chemo is over. As someone who was known for my hair (no need for modesty here; I have GREAT thick, flowing, gingery hair), I thought that would be the toughest battle. I even cut it short before it began to fall out, calling on the great Furiosa for inspiration. But it felt empowering to say a temporary goodbye to something that would have caused more effort than required in a time of weakness. No, I would say the hardest thing has been all the subtle betrayals by my body that add up to someone who acts and looks completely different. But that person is a warrior, and my transformation is necessary to fight the evil raging in my left tit.

•The lovely @wesbickel was helping me document my Round 2 chemo appointment today, and I noticed that I wasn’t aware he was taking the first picture on the left. …. •It pretty much sums up the majority of my feelings today. I didn’t sleep much last night, the infusion was scheduled very early. You can see the tired lines around my eyes, the resting bitch face taking its natural form. The general unease about the day ahead after getting my port accessed. Not looking forward to the post-treatment fatigue and cloudy head. …. •The picture on the right was taken a few minutes afterwards and was me trying to make a funny tribute to my (near) decade in London — miss you, wankers — and shows the power of memory, of me channeling all the outpouring of love and positivity that gets sent my way. It really can make me smile that quickly and it gets me through the tougher days. ❤💪🏻

The support of my friends and family has been the biggest contribution to my perseverance, but I find that journaling, meditating (I use an app. I’m not that great at it), going to gentle yoga (hello my elder sisters!) and sharing my experiences with others are reasons I’ve made it this far.

I don’t know where this journey will take me; I’m not going to pretend to. But I am consistently reminded that I’m in the position I’m in because I lifted my arms up and felt around.

My recommendation to everyone (because yes, male breast cancer is a thing) is to get a glass of wine, sit on the couch and feel around. Or get in the shower and feel around. I don’t really care. Cancer doesn’t grow in a day, and it doesn’t grow in weeks. I could have caught this sooner, maybe, if I checked more regularly. But the important thing is that I did catch it, and if you’re around my age, that’s really the best means you have of protecting yourself.

Please set a Google calendar reminder, or write it on your actual calendar. If you’re a hipster, train your messenger pigeons. If you’re an over-scheduled, tied-to-your-phone millennial, there’s an app for that. Feel yourself up. Look for lumps, look for dimpling, look for rashes.

Watch this video for self-examination tips