The 39 Loveliest Film Titles in the English Language 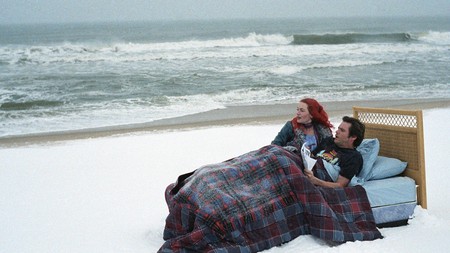 When did you last hear a movie title that pleased you with its euphony and lyricism? Here are some that are music to our ears.

Arabesques on the Pirosmani Theme (1986)

Like the Greek filmmaker Theo Angelopoulos (The Suspended Step of the Stork, Ulysses’ Gaze, Eternity and a Day), the Soviet master Sergei Parajanov liked grave and faintly portentous titles: Shadows of Forgotten Ancestors, The Colour of Pomegranates, The Legend of Suram Fortress. The short documentary Arabesques is a poetic meditation on the work of the Georgian primitivist painter Niko Pirosmanashvili. 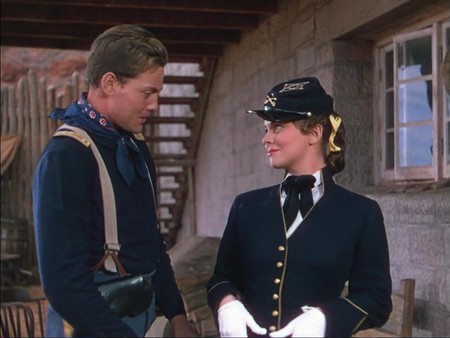 A moralizing D.W. Griffith one-reeler, shot by Billy Bitzer, about a dressmaker’s daughter who marries into money. When her husband loses his fortune, she’s tempted to leave him for a rake. She changes her mind when she finds the orange blossom wreath she wore at her wedding. Orange blossom was a symbol of fertility in the Victoria era of Griffith’s youth. Leading lady Florence Barker was only 21 when she died of pneumonia in 1913.

This Griffith one-reeler tells the tragic story of a woman (played by Linda Arvidson, the director’s wife) awaiting the return of the faithless sailor who promised to marry her. It was influenced by Winslow Homer’s shoreline paintings and beautifully photographed by Bitzer. Thirteen of the 19 shots encompass the shore and the sky—their repetition underscoring the fruitlessness of the heroine’s vigil.

No film franchise has better titles than the James Bond series: they are as consistently worldly as the recurrent theme tune. Quantum of Solace, from the 1980 Ian Fleming short story, refers to the minimum humanity partners in a romantic relationship must feel for each other for it to survive. Quantum was the second 007 film starring Daniel Craig.

Guy Maddin’s fable about the cruelty of love is a gorgeous color spectacle blending the Gothic and the Shakespearian. It’s not the Winnipeg maestro’s strongest entry, but the wondrous title gives it the Alpine aura of a German mountain film. Maddin’s next best title is The Saddest Music in the World (2003).

During the Depression, a pith-helmeted archaeologist (Jeff Daniels) in a RKO nightclub romance steps from the screen and woos a downbeaten New Jersey waitress (Mia Farrow); when the actor who plays him shows up, he betrays her. The exotic title of the movie within the movie perfectly encapsulates 1930s Hollywood illusionism. It’s Woody Allen’s best title, though The Curse of the Jade Scorpion (2001) and Melinda and Melinda (2004) run it close.

Nicholas Ray’s noir masterpiece about a screenwriter (Humphrey Bogart) with an uncontrollable temper took its brooding existential title from Dorothy B. Hughes’ novel; it took its fatalistic mood from Ray and his leading lady Gloria Grahame’s collapsing marriage. New Order gave the same title to one of their majestically mournful early songs. 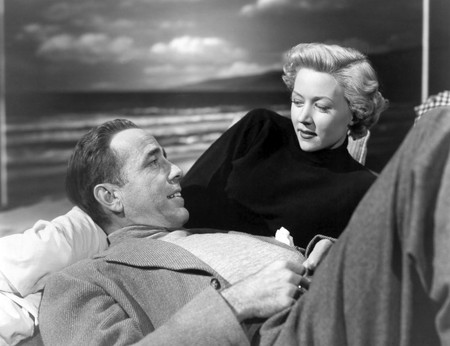 “There never was a man like Shane” ran the tagline of George Stevens’ epochal range war Western starring Alan Ladd. Well, there never was a title like Shane—flinty, gracious, masculine (but not macho). It evokes the gleam of Ladd’s elaborate gun rig and his lightning speed in the draw. Shane—a buckskin-clad angel of death.

Memory—false or otherwise—is hauntingly ingrained in the title of Alain Resnais’ elliptical masterpiece, in which a man (Giorgio Albertazzi) meets a woman (Delphine Seyrig) at achâteau and claims he met her the previous year at Marienbad; Sacha Pitoëff plays a second man, possibly the woman’s husband. Have we all not had “Marienbad moments”?

If you want to be a happy adult, just erase all memories of romantic anguish! Kate Winslet and Jim Carrey are the stars of the Charlie Kaufman-scripted post-modern melodrama directed by Michel Gondry, but it’s love victim Mary (Kirsten Dunst) who quotes the title, taken from Alexander Pope’s 1717 verse epistle Eloisa to Abelard.

This Charlie Kaufman title is a play on the city name Schenectady, New York, from the Mohawk word skahnéhtati, meaning “beyond the pines.” A synecdoche is a figure of speech in which a part of something represents the whole (“wheels” for car, “hand” for worker). Fiction and reality coalesce in the story of an ailing theatre director (Philip Seymour Hoffman) mounting a play that spins out of control.

Directed by Isao Takahata for Studio Ghibli, this animated film was based on the World War II memoir in which writer Akiyuki Nosaka recounted the loss of close family members. The simplicity of the bittersweet title makes 2011’s To the Forest of Firefly Lights sound like it’s trying too hard.

Maya Deren and Alexander Hammid’s experimental short (usually credited to Deren) depicts the workings of an entranced woman’s unconscious mind as her nightmarish impressions bleed into her reality. Laden with symbols and indebted to film noir, it is a pivotal work in American avant-garde cinema. Married at the time, Deren and Hammid played the man and woman on screen. 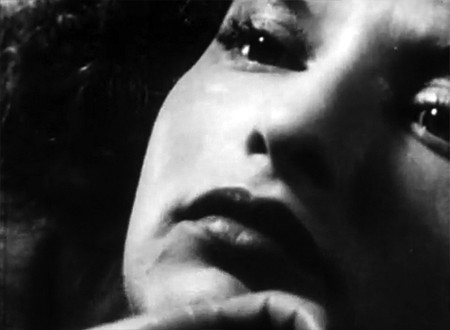 Maya Deren in “Meshes in the Afternoon” | © Mystic Fire Video

In Dennis Potter’s 1976 drama, banned for 11 years, the Devil rapes a catatonic girl back to consciousness—a classic Potteresque act of liberating violence. Michael Kitchen starred in the BBC play; Sting in the 1982 film version. Potter was brilliant at titles: this one memorialized the medicine Mr. Banks recalls his hateful nanny giving him in P.L. Travers’ 1934 Mary Poppins novel.

Ingmar Bergman’s bitter hallucinatory drama probes the sexual power play between a worn-out circus owner (Åke Grönberg) and his cruel but justifiably jealous young mistress (Harriet Andersson). “Sawdust and tinsel” has a whiff of Shakespeare’s verdict on life as a tale “Told by an idiot, full of sound and fury, signifying nothing.” Some may prefer the Bergman title Smiles of a Summer Night (1955). 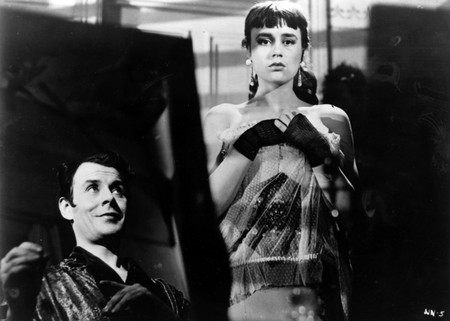 It’s the rhythm of this title and its nostalgia for the hardboiled 1952 comedy thriller Macao that renders it poetic. Part mystery noir, part queer nocturne, João Pedro Rodrigues’ haunting film is also a ruminative travelogue seared by memory and loss. 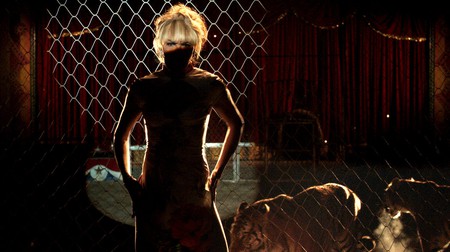 Director James William Guercio’s homage to John Ford’s Westerns was partially shot in Monument Valley. Almost (but not quite) a cult classic, it stars Robert Blake as a bored Arizona patrolman who’s champing at the bit to work homicide. He rides one helluva hog: the 1965 Harley-Davidson FL Electra Glide, the first Harley fitted with a Panhead engine and an electric starter.

The Imaginarium of Doctor Parnus (2009)

Well, it was either this robust Terry Gilliam title or the more cloyingly christened Mr. Magorium’s Wonder Emporium (2007). The story of a traveling salesman (Christopher Plummer) who sells different grades of fantasies to his clients in modern London, Imaginarium marked the last screen performance of Heath Ledger,

The Bird With the Crystal Plumage (1970)

Dario Argento made his feature debut with a bloody giallo about a blocked American writer who spies a mystery man attacking a women in an art gallery. It turns out the assailant owns a rare Siberian bird that makes a telltale cricket sound. Any relation to the Maltese Falcon?

In late 19th-century Brighton, adulteress Pearl (splendid Googie Withers) prevails upon a smitten young man (Gordon Jackson) to bring her some strychnine from his chemist father (Mervyn Johns) so she can get rid of her abusive publican husband. The title came from Roland Pertwee’s play, but it might have come from the Victorian domestic how-to book Enquire Within Upon Everything. 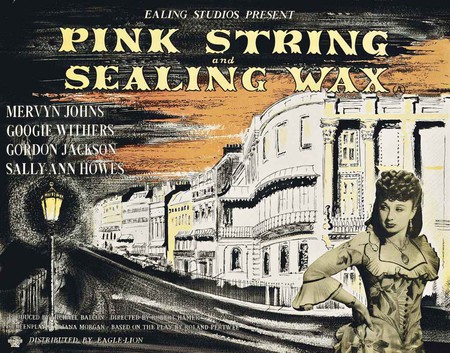 Tran Nu Yên-Khê played the humble Vietnamese servant, Mùi, who goes to work for a rich but troubled merchant family in her husband Tran Anh Hung’s much-lauded drama. Her serenity and silent appreciation of the natural environment—a frog, a line of ants, the papaya fragrance—throw the family’s spiritual lack into sharp relief.

Werner Herzog‘s first English-language film was a docudrama about a land dispute between aborigines and a uranium mining company in the Australian desert. Fearing for the safety of the region’s dreaming green ants, whose life cycle is the source of human existence, the aborigines block the company’s bulldozers. Land-rights activist Wandjuk Marika played the leader of the protesting elders. 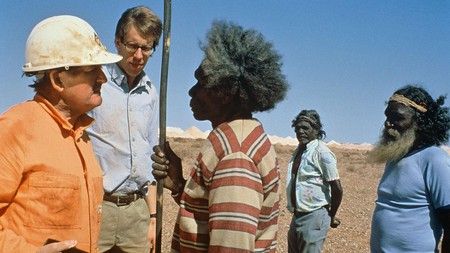 Julien Temple’s unremarkable biopic of the Romantic poets Coleridge and Wordsworth was named for the capital of hell in Milton’s “Paradise Lost.” It’s also the title of an apocalyptic 1841 John Martin painting.

Pandora and the Flying Dutchman (1951)

James Mason and Ava Gardner starred in this modern-day mash-up myths, which draws on Wagner’s opera and the writer Heinrich Heine’s vision of the fatal woman. It was directed by Albert Lewin, who hired Jack Cardiff to shoot it in luminous Technicolor and Man Ray to contribute surrealistic touches, including publicity photographs of Gardner at her most alluring.

In 1917, two English cartographers (Hugh Grant, Ian McNeice) measure a Welsh mountain and claim it’s a thousand feet too short, so mus be designated a hill. The irate locals set about proving them wrong. The Garth Mountain of Taff’s Wells, six miles north of Cardiff, was the source of the story told to writer-director Christopher Monger by his grandfather.

“Gallivant” means the same as “galavant,” to roam without a plan. Director AndrewKötting filmed his poetic ramble around Britain’s coastline with his 85-year-old grandmother Gladys and seven-year-old daughter Eden, who suffers from Joubert syndrome. It was a landmark psychogeographic film—and enormously moving. 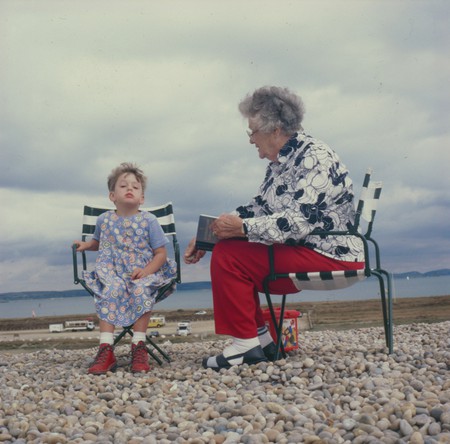 The title of Aleksei German’s fulminating satire of Stalin’s anti-Semitic “Doctors’ plot” is the first sentence uttered in the Soviet Union during the post-Stalinist era—namely, Lavreniy Beria’s triumphant command to his chauffeur following the death of the leader on March 5, 1953. (Beria was executed on December 23.) Lovely? Let’s say “inspired.”

The Romance of Astrea and Celadon (2007)

Set in druidic 5th century Gaul, Éric Rohmer’s last film was an adaptation of Honoré d’Urfé’s novel L’Astrée (1607–27). The shepherd Céladon (Andy Gillet) loves the shepherdess Astrée (Stéphanie Crayencour), but, alas, she flees after seeing him flirt with someone else. After nymphs rescue the despondent swain from a watery suicide, he naturally dresses as a woman to win Astrée back. The film lacked the philosophical complexity of Rohmer’s modern meditations on love, but its title leaves us on a pastoral high.

The Infernal Caldron and the Phantasmal Vapours (1903)