Staring At Roses In The Closet: Allen Ginsberg's Tribute To Home

With the approaching 2016 Election, Ginsberg’s “America” seems more relevant than ever, which begs the question: what makes one’s nation a home?

One of the most poignant renditions of home as seen through national identity prevails in Allen Ginsberg’s poem “America,” which first appeared in Howl in 1956 and was audio recorded in 1959. In a later mashup with the haunting instrumental of Tom Waits’ “Closing Time,” this recording (see bottom of article) still manages to capture the strangely contradictory essence of modern times, and subtly challenges our confidence in a definitive idea of America. 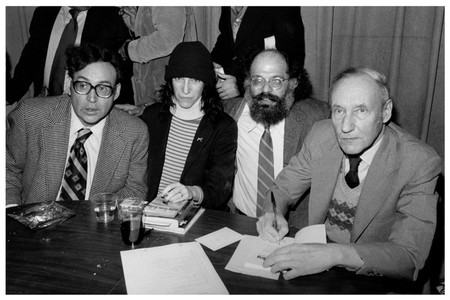 What makes one’s nation a home? The devastating difference between pride and shame, holy litanies and graveyard hymns, internal dialogue and quiet subdued outrage, are all at center of the cultural body we call America. Ginsberg defines this home in 1956, a home that most didn’t want to acknowledge, but is now all too commonplace in our historic narrative of the pre-civil rights movement.

Now, during these election times, how are we defining home? How will our future generations discuss their homeland? Where is our Ginsberg now?

Ginsberg illustrates an America that can only be seen in glimpses: while staring at roses in the closet, while perusing libraries “full of tears,” while struggling with “insane demands,” “supermarkets,” and of course, while existing under the presumed threats of foreign entities. It’s one of those pieces that you can listen to over and over again, like any classic, and gain new sight at the turn of each line; perhaps because of the soothing, rhythmic speech of Ginsberg, coupled the jolting harmony of Waits, or because the lines seem to change over time. Waits, too, has that authentic, recognizable voice reminiscent of ‘home’, and yet, he remains silent.

Under Ginsberg’s microscope (macroscope?) of America, the internal dialogue of home life is exposed. The isolation, disillusionment, bitterness is revealed, along with the confusion that sits deep in the belly of most Americans. “Are you going to let your emotional life be run by Time Magazine?”

He portrays American patriotism as a vacillation between love, pride, and desolation with lines like “You made me want to be a saint,” “I still haven’t told you what you did to Uncle Max when he came home from Russia,” and “America, I’ve given you my all and now I’m nothing.” In 2016, our emotional life is run by Facebook, rather than Time Magazine, and the Middle East is the new Russia. As much as things change, they still seem to stay the same.

The depiction of America in the ‘50s still rings true today. Just like in 1956, we’re still defining this idea of home, just like we’re defining and reconsidering our spheres of influence, our place in the world, as citizens of the world. “It occurs to me that I am America.”

And when it comes to the 2016 election, in the homeland of the U.S.A, Ginsberg’s lines have never felt more relevant: America, “are you being sinister or is this some form of practical joke?”

Whatever the outcome of Trump vs. Hillary, “I will continue,” as Ginsberg wrote, “like Henry Ford.” But also like Ginsberg, I may be resolved to just “sit in my house for days on end and stare at the roses in the closet.”