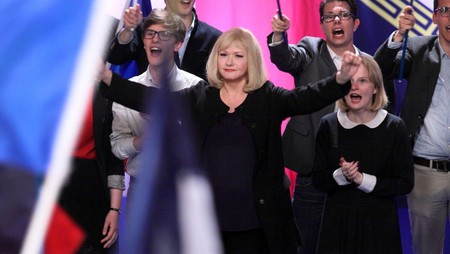 Catherine Jacob in 'This Is Our Land' | © Distrib Films

Lucas Belvaux’s film about a French town simmering in right-wing hate is a frightening sign of the times.

Alex Ross’s article on Adolf Hitler in the current New Yorker concludes with a comparison between the Führer and Donald Trump and wonders if an American version of Hitler could be lurking somewhere, “cloaked by the blue light of a computer screen, ready, waiting.” France has been down this road already with the failed spring 2017 presidential election bid of Marine Le Pen, leader of the National Front party. Le Pen secured a third of the vote in the second round on May 7, but lost to Emmanuel Macron of the centrist En Marche! party.

Lucas Belvaux’s drama Chez Nous—just released in the U.S. as This Is Our Land—opened in France two months before the inconclusive April 23 vote in France. That gave moviegoers plenty of time to assess its abrasive rabble-rouser Agnès Dorgelle (Catherine Jacob), candidate for the fictitious Renewed Nation Party (R.N.P.). She is a thinly veiled portrait of Le Pen. Her fiercely delivered nationalistic rhetoric meanwhile recalls that of the man who boasted he would “make America great again.” 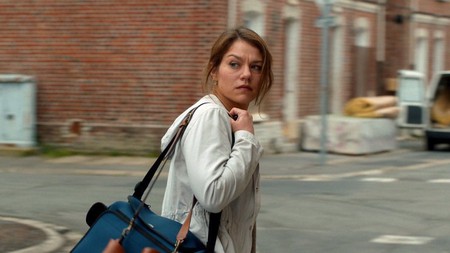 Émilie Dequenne in ‘This Is Our Land’ | © Distrib Films

Dorgelle is set to run for the French presidency from Hénart, a former mining town in north-eastern France where a local farmer is still plowing up unexploded bombs from the First World War. Then the imperialist force the French resisted was German. Now Dorgelle and her cronies, including the gentlemanly doctor Philippe Berthier (André Dussollier), regard Muslim refugees as colonists.

It is Berthier who prevails upon the film’s good-natured but politically naive protagonist, Pauline Duhez (Émilie Dequenne), to run as mayor of Hénart on the same ticket as Dorgelle. Unbeknownst to herself, Pauline will represent an extreme right, crypto-fascist wing of the R.N.P. A hardworking and locally popular visiting nurse and single mother of two, she assents to stand as mayor because she wants to make a difference, but also because she owes a debt of gratitude to Berthier. The doctor attended her dying mother 15 years previously and has helped her ailing father, Jacques (Patrick Descamps). A Communist and former militant union organizer, Jacques, for his part, banishes Pauline from his home when he learns of her “betrayal.”

As a mayoral candidate—in fact, a political puppet—Pauline is forced to dye her brown hair blonde so that she’ll look good in photos with Dorgelle. She’s also not allowed to perform her job or see her kids. But she can be pushed only so far. The breaking point is her love life. After a hiatus of 20 years, she has recently taken up again with Stéphane (Guillaume Gouix), also known as Stanko, who was her high-school boyfriend.

Patrick Descamps, Coline Marcourt, Émilie Dequenne, and Guillaume Gouix in ‘This Is Our Land’ | © Distrib Films

A tough industrial worker and high-school soccer coach, Stéphane is gentle and loving with Pauline and gets on well with her son and daughter. But he is a onetime cohort of Berthier in the fascistic Patriotic Bloc and has an unassuaged penchant for violence. The racist cadre he belongs to one night captures and encages two Muslim kids who have stolen money off a dead woman. The selfies he foolishly has taken of himself with them recall photos taken by U.S. Army personnel at Abu Ghraib. Blinkered by love, Pauline overlooks the huge fascist tattoo on Stéphane’s back and indulges him taking her son on a paramilitary exercise in an empty building.

This Is Our Land tells its story pragmatically—Belvaux doesn’t squander a shot. The acting is spare. Dequenne makes Pauline immensely likeable without sentimentalizing her; she has been a winning presence since she appeared in 1999’s Rosetta. Descamps is grouchily principled as Jacques and Dussollier smoothly sinister as Berthier.

The film’s final passage is awkward, however. The moment in which Pauline stands up to Berthier is underwhelming. The removal of the story to a soccer match in Lens, where an angrier climax ensues, is perplexing. The sense of fascism and racism percolating then boiling over in a small town that has fallen on hard times is so central to This Is Our Land that Belvaux shouldn’t have abandoned the movie’s setting. That doesn’t mean the film’s message will be lost on anyone who sees it in these neo-authoritarian times.

This Is Our Land was released in the U.S. on April 18.