See Vincent van Gogh's Living, Breathing World as He Would Have Painted It 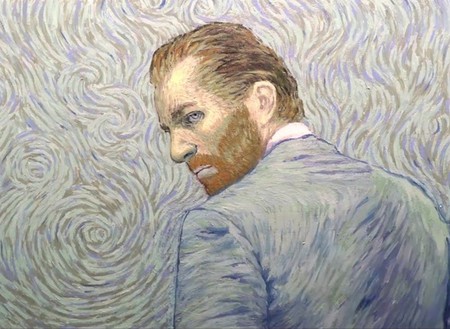 Dorota Kobiela and Hugh Welchman’s Vincent van Gogh biopic Loving Vincent speculates—but doesn’t conclude—that the troubled artist may have been shot accidentally by a hand other than his own. More sensational than the story, though, is the film’s Van Gogh-textured surface. Culture Trip talked recently spoke to the married filmmakers.

Loving Vincent was initially shot as a spartan live-action film with actors performing the script. Dorota and Welchman then deployed 95 painters to re-create the film frames as 62,450 oil paintings on canvas—mostly at the Gdansk Science and Technology Park in Northern Poland—as they set about animating the film primarily in van Gogh’s late style.

The result is startling: a movie that interprets van Gogh’s world not necessarily as he saw it, but as he painted it. As they come to life, the authentic van Goghs captured in the film coalesce with the post-impressionistically evoked environment from which the painter isolated them.

Douglas Booth plays Armand Roulin, the handsome son of the bearded, burly postman Joseph Roulin (Chris O’Dowd) who befriended van Gogh (Robert Gulaczyk) in Arles. Armand is tasked by his father with delivering the last letter van Gogh wrote to his brother Theo, not knowing that Theo, too, is dead. A pugilistic and disaffected blacksmith’s apprentice, Armand is gradually humanized by his errand as he gradually sees that van Gogh was a kind, soulful man. 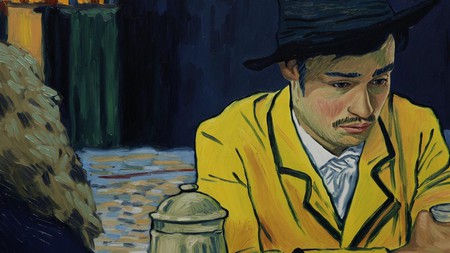 Culture Trip: Dorota. I got a sense from reading about Loving Vincent that you identify with Vincent van Gogh to some degree, and that that was maybe a driving force behind the film. Can you talk about that?

Dorota Kobiela: I’m not sure if I identify with him per se, but I found myself in a situation where I was confused about what to do with my life, so I guess I had a similar moment to Vincent. I had been educated in fine arts, but to earn a living I started working in films and animation, using increasingly complicated effects. I felt a bit lost because I was not making my own movies or painting and exhibiting, just participating in other people’s projects.

It was when I started searching for something that would give me some inspiration that I reread Vincent’s letters. I had originally read them when I did my masters thesis on the connection between art and mental health. Vincent was one of the people I wrote about.

I don’t think I have such a strong personality as Vincent, but I’m also driven by what I do, so maybe that’s the connection between us. 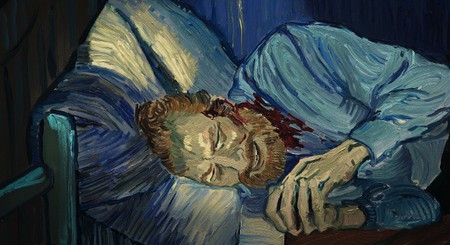 CT: Hugh, where do you enter the picture?

Hugh Welchman: I was involved in another project and it took me a while to fall in love with Loving Vincent. When I started reading the story of his life, I was amazed. He had failed at four careers in his twenties and was incredibly depressed. He had been written off by his entire family as a failure and had failed in love. In this very dark place, he decided that he was going to pick himself up and become an artist. He started drawing at the age of 27 and started painting at 29. In the space of the next eight years, he transformed modern art.

CT: Armand starts out as the reluctant bearer of Vincent’s last letter to Theo, not knowing Theo is also dead. Why did you choose Armand as your protagonist?

DK: Armand gave us the opportunity to have a character who has some sort of a journey. There’s not much material written about him, so we don’t know what happened to him, except that he became a gendarme.

HW: A lot has been written about Père Tanguy [the paint grinder and art dealer, played by John Sessions] and Dr. Gachet [van Gogh’s Auvers physician, played by Jerome Flynn], so we couldn’t make up stuff about them, whereas Armand was a blank slate. 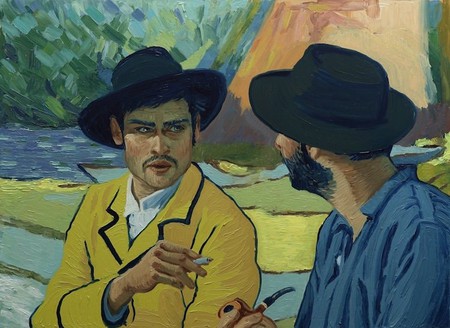 You can imagine Armand in Arles in 1888: his father is going out drinking with this crazy foreigner who cuts off his ear. Mrs. Roulin was scared of Vincent, and she fled to the countryside with her two youngest kids. Armand must have felt anger toward this guy who had driven his mother and siblings out of town.

We thought Armand was probably very embarrassed by Vincent, which meant we could send him on a journey to discover that the crazy foreigner maybe wasn’t so crazy after all—that there some value to him, which would impact Armand’s own life. Maybe, as a result, he’d find something different to be than a blacksmith’s apprentice. A detective perhaps! [laughs]

CT: The film probes the mystery of Vincent’s death, which may not have been a suicide. How did that become the story you would tell?

HW: It’s a big biography with a little appendix that brings up the rumor that Vincent was accidentally shot by boys. This was a rumor in the village first recorded by van Gogh journalists rather than by scholars. It came into the mystery we were investigating about why Vincent would kill himself at a time in his life when things seemed to be going better for him than at any time in the previous ten years. This investigation was a motive for discovering who Vincent really was. 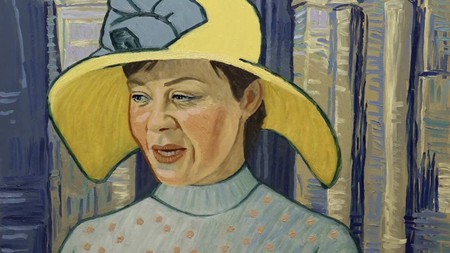 CT: While I was watching the film, I wondered if Dr. Gachet’s envy of Vincent’s artistic prowess and his friendship with Gachet’s daughter, Marguerite [played by Saoirse Ronan], made Gachet [Jerome Flynn] a murder suspect?

HW: He was our first villain! There are theories that he gave the gun to Vincent. We know there was a big argument between Vincent and Gachet two weeks before the shooting, and we know that they didn’t see each other in the final two weeks. Gachet finally turned up at the wounded Vincent’s bedside.

CT: What became of Marguerite?

HW: She never married but lived all her life in the same house. Vincent’s enormous painting of her, “Marguerite Gachet at the Piano,” hung over her bed in her tiny room for 44 years, and she took flowers to his grave in Auvers-sur-Oise every week. That has given rise to speculation that the argument between Vincent and Gachet was about a budding relationship between Marguerite and Vincent. 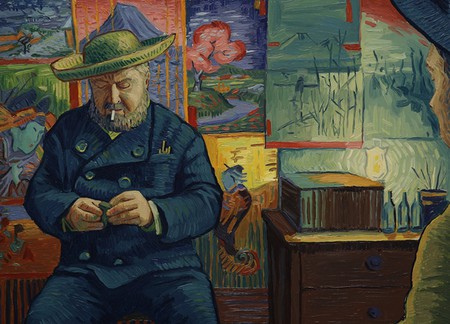 CT: Do you think she was in love with him?

HW: No. She knew the art world—Cezanne and Manet had visited the Gachets’ house—and she would’ve known, like her father, that Vincent was a very important artistic talent. But there’s no indication there was any relationship between them.

DK: She definitely was impressed by his moving personality, but I don’t think he could have a relationship with a woman by that time.

HW: He said in his letters from Arles, “I’ve given up on having a family. In a way, my paintings are my babies. I know they’re not a substitute, but it’s the best I can do.”

CT: The film isn’t conclusive about the circumstances of Vincent’s death. Did you disagree about them at any point? 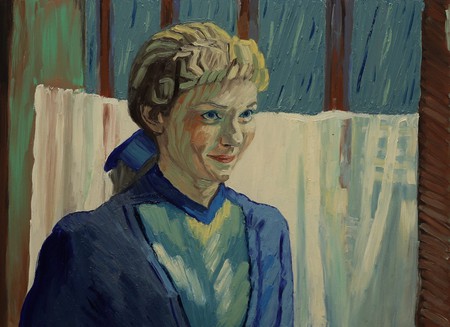 HW: On this one issue, at least, we were often at loggerheads. There’s simply not enough evidence to know what happened for sure. Before we heard the account of the boys accidentally shooting Vincent in some kind of drunken altercation, we had already identified lots of problems with the narrative of his committing suicide. [Van Gogh was shot on July 27, 1890, and died on the 29th.]

CT: What kinds of problems?

HW: Where did his painting equipment disappear to? Where did he get the gun? Why, if he shot himself, and the gun fell on the ground, couldn’t he just pick it up and shoot himself again?

One thing to bear in mind is that Theo, Dr. Gachet, Père Tanguy, Émile Bernard [the painter], Gauguin—none of these people, who knew him best, who were very close to him, were surprised that the verdict was suicide. Ultimately, we’ll never know what happened.

DK: There is validity in the suicide theory because Vincent was very close with Theo and didn’t want to be a burden to him and his family. 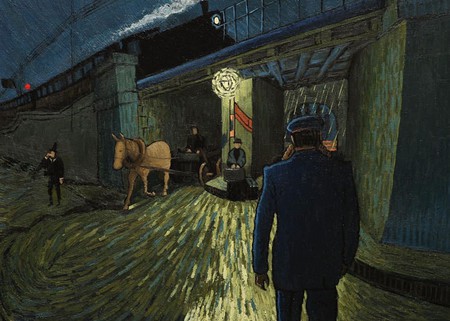 CT: Do you think Van Gogh’s clash with Paul Gauguin was a significant factor in his breakdown?

DK: I think it was very damaging. Whenever something new was starting for Vincent, he was full of hope. He was so excited and hyped up. This kept happening. In The Hague, in Arles, then Auvers.

HW: He hoped he was going to get a stable situation by setting up a brotherhood of artists in the South who would support each other. He didn’t believe he was very attractive as a person, but he thought if Gauguin, who was magnetic, came to the Yellow House in Arles, then other people would follow.

The trouble was that Gauguin prevaricated for weeks about coming there and was negotiating with Theo about money. When he arrived, the summer [of 1888] was long over, and Vincent was already on a knife edge because he’d done a hundred paintings in the previous six months. He was exhausted and fragile and eaten up by worrying whether Gauguin would come. And then to be locked in the house with Gauguin, who was an incredibly forceful personality…

Gauguin came and saw “Sunflowers” and “The Yellow House” and “Bedroom in Arles” and all these masterworks, and he must have known that this was something extraordinary in the history of art. Yet he was pushing Vincent to paint in a different way, from his imagination, which Vincent hated doing. At the beginning, Vincent was happy to submit to Gauguin’s leadership, but after two or three weeks they fell out. 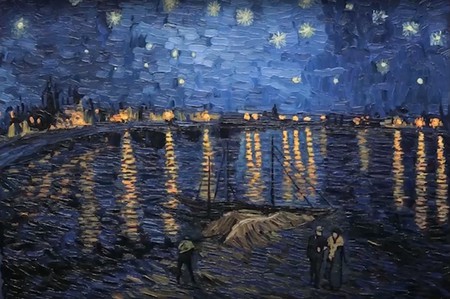 CT: I was amazed by your vertical shots in the film. At you start, you tilt down from a starry sky to Arles and dolly into the yard of an inn where Armand is fighting a soldier. At the end, you reverse that shot, tilting back up into the heavens. Were those camera movements complicated by the fact that you had every frame painted?

DK: That was the most complicated part. I would have had many more moving camera shots if I could have, because I found them dynamic. But the difference between painting camera movement frames and still camera frames was enormous. It’s like repainting a canvas 10 times.

CT: The thickness of the paint in the paintings you created for the film is almost three-dimensional. How was that accomplished?

DK: The paint was physically very thick, even thicker than on the original paintings. We put an almost sculptural, three-dimensional-like impasto on the canvas; paint would be standing off the canvas a half-inch thick. We used clove oil to keep it wet.

HW: Which is something that Vincent did as well.

CT: Have you imagined how Vincent would react to the film?

DK: He would have been pleased, I think, that a community of artists—95 people from around the world—got together to help make it, that they talked about his work and painted and exhibited together. For example, a Serbian painter teamed up with one from San Diego and two girls from Ukraine and they showed their work together. All these things happened because of Vincent.

HW: The film is just a small part of what would bowl him over if he was alive today. Through his art, Vincent is talking directly to people all over the world in a way that he could never talk individually to a single person in his lifetime. He had this big heart and a love of the world and a love of people that he couldn’t communicate, but his frustration was what motivated him to create art.

Loving Vincent in currently on release.