This Prefab Design Offers a Quiet Space in the Workplace 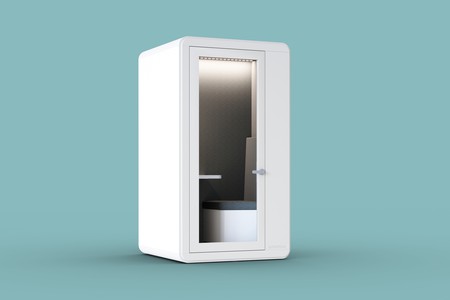 An eco-friendly, ergonomic workplace solution arrives on the design scene—just in time for NeoCon 2017. But is it really ‘good design’?

With open-office spaces becoming the norm, the need for a bit of privacy and quiet time is greater than ever. Architect and designer Brian Hackathorn, along with entrepreneur Jeremy Jennings, designed a single-occupancy “work and wellness” structure that will officially launch at this year’s NeoCon in Chicago. 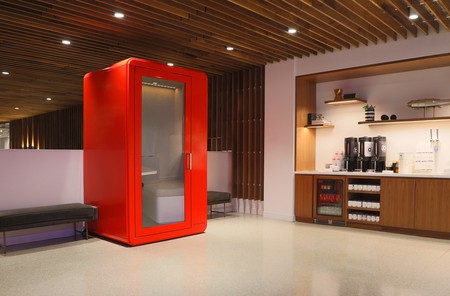 Jabbrrbox, a 48 x 48 x 90-inch prefabricated, furnished mini-workspace, integrates technology with comfort and privacy in order to fill a “critical void in the marketplace.” According to the press release, Jabbrrbox was “engineered for today’s increasingly mobile workforce,” and comes pre-wired with power outlets and USB charging ports to allow for hyper-focused work. “Whether it is used during blocks of time between meetings or as a convenient quiet place to work, the Jabbrrbox offers a space to think, create, connect and recharge.”

While the Jabbrrbox attempts to blend functionality and productivity with mindful design – a ubiqutious trend in workplace solutions – how the space actually feels from the inside has yet to be revealed. From the outside, Jabbrrbox looks a bit claustrophobic, especially for people who aren’t used to working in such small spaces, but it could prove itself to be a miniature zen-den and a welcomed reprieve from office chit-chat. It’s also not clear whether or not the space includes a curtain to shut out visual stimuli, as well as the gaze of co-workers, but perhaps that would turn the space into a sleep-den, rather than a productivity chamber.

Still, designer Hackathorn says that the design “allows for the best of both worlds,” and when it comes to working in an open-office space, that means synergy and privacy. “Many of today’s workplaces are open-plan environments, which aid in collaboration, promote teamwork and keep the communication channels open. However, the downside has been a lack of privacy and an increase in distractions and noise,” says Hackathorn. “Jabbrrbox offers…employees a distraction free and well-designed place for productivity and concentration within an open space.”

Each model is made with commercial grade steel and fabrics, and comes equipped with an LED light strip that can reportedly produce light in 16 million colors. Hackathorn and Jennings also created a version that allows for G Suite functionality and includes a 24-inch Google Chromebase, which they’re calling the Jabbrrbox Chromebooth, so users can streamline their tech flow.

You can check out other exhibitors at this year’s NeoCon here.